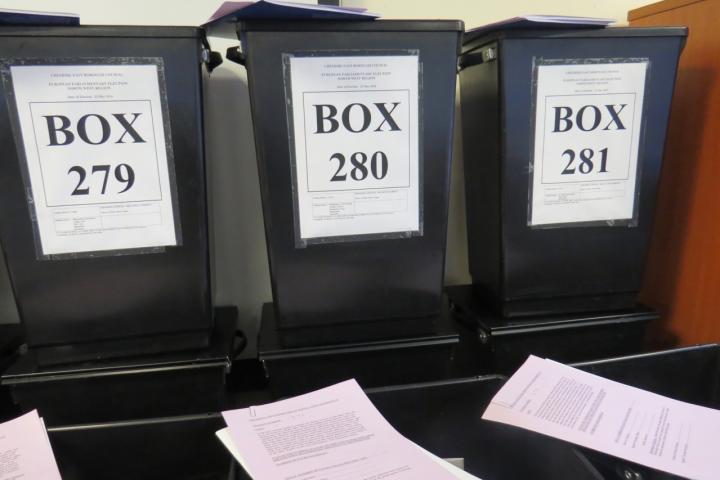 Residents in the Dean Row ward of Wilmslow will have the choice of four candidates when they go to the polls next month.

The by-election was called following the resignation of Toni Fox on June 30th, as she is relocating with her family to Shropshire.

Toni was first elected as a Residents of Wilmslow candidate in May 2015 and then re-elected in May 2019 when she became a Cabinet Member, with responsibility for planning.

The four candidates standing are:

Interviews with each of the candidates will be published on wilmslow.co.uk in due course.

The by-election will take place on Thursday, 2nd September, between 7am and 10pm.

Terry Roeves
Cllr Fox performed her duties for the Residents of Dean Row Ward admirably, with creativity and determination to get things done.
I have no reason to believe that Lata Anderson will not be just as effective on our behalf. It’s very good to be able to vote for a party candidate that puts us Residents first and not themselves.

Brendan Murphy
Yes, it is true that too many local councillors, once elected, pursue political party interests. And Lata Anderson is a member of Residents of Wilmslow and that outfit is registered a a political party!! The RoA has a "party whip" and private group meetings and it is led by people who have their own and make the same claims as other parties. Incidentally, what "creativity" other than self interest did Cllr Fox bring to the council table?

Jon Newell
In response to the post by Brendan Murphy, I would like to clarify the position.

Residents of Wilmslow is a registered political party. I am the Treasurer of the party and an elected member of Wilmslow Town Council.
We chose to register ourselves as a Party for only one reason. If we wish to identify ourselves on the ballot papers we must be registered with the Electoral Commission.
The registration process requires a registered party to have a “leader” a “treasurer” and a “nominations officer”. Our officers hold office only to fulfil the Electoral Commission requirements.
The elected Councillors from Residents of Wilmslow are not whipped. We share one principle - to promote the quality of life in Wilmslow. How each Councillor chooses to promote this principle is left to each individual.

Manuel Golding
I feel my old friend Cllr Brendon Murphy is being mischevious. He knows full well why RoW has to be termed a "party", in order to be identified by our logo & name on ballot papers. We have no whip system though our councillors are part of the Independent team at CEC.Brendon has his little party of "Real Independents" at CE-his "party" consists of two -himself & a colleague. Only RoW and our Independent colleagues will fight for Wilmslow.We united with the Independent group in order to try to ensure RoWs desire to limit the destruction of yet more Green Belt in Wlm; the Conservative group's leadership was only interested in continuing controlling the council to its whims & desires, as it had done for years, with even more ldestruction of the Green Belt.Our alliance ensures RoW can protect more of the Green Belt being swallowed up by greedy developers, as is the Conservative's way- leopards don't change their spots!
RoW expects its elected councillors to always act in the very best of interests for our voters, supporters and Wilmslow - their consience is the voters best bet. We leave national party politics to our opponents, no matter from what party,they will follow national leadership agendas-Wilmslow will not be part of that agenda,RoW leaves all that to those parties'candidates standing in this by-election.We've seen them and heard them all before-when it comes to Wilmslow they are all toothless tigers.Only
Residents of Wilmslow will standup for Wilmslow and its inhabitants.

Alan Brough
I’m surprised that no one has challenged Brendan Murphy over his foul and vindictive assertion that Toni Fox put “self interest” before her duty to local residents. My own experience and understanding of her work suggests entirely the opposite.

Stuart Redgard
I know Councillor Brendan Murphy from my days as a member of the Cheshire Independent Network but I have had no contact with him since 2015. If I recall correctly, when I first met him in 2011, he was a member of the independent group of councillors on Cheshire East Council and he represented the Macclesfield Tytherington ward. He successfully held the seat in the 2011 elections, but lost the seat in the 2015 elections to the conservative party. As far as I recall he had no problem being a member of the independent group of councillors from 2009 until May 2015 along with members of the political party known as Middlewich First.

In 2014 he very kindly helped me with canvassing when I stood as an Independent candidate for election to Wilmslow Town Council.

He was re-elected to Cheshire East Council in May 2019, this time for the Disley ward but he decided not to join the Independent Group of Councillors but to create another grouping called “Real Independent”.

With regards to his comments about Toni Fox I would refer him to the audio recording of the Strategic Planning Board of 27 February 2019. During this meeting (at which I was present), Councillor Toni Fox raised the issue of why a planning application relating to Lindow Moss in Wilmslow was being recommended for approval when the applicant was quite clearly in breach of another application made in 1999. In 2013, it had applied for a change in the condition of the 1999 application but the CEC planning department had not considered this application for recommendation or approval in the 6 years since it was made! It transpired that the applicant was already in breach of the 1999 application as they had continued to process and remove peat from the moss over an area of land that they did not have planning permission to do so.

Personally speaking, I think Manual Golding is spot on by saying that Brendan Murphy is being mischievous.

Former Councillor Toni Fox’s record stands out as one to be highly respected. And no I am not a member of ROW or any other political party. I’m what Brendan seems to consider as a “Real Independent”.

Nick Jones
I concur fully Alan... Toni helped a number of concerns I had, as have other RoW CEC and WTC Cllrs. A refreshing different breed to the last lot !... [ we wont mention Lyme Green, Co Socious, Green belt destruction etc] ... The voting public are nobody's fool.. They will decide.

Roger Bagguley
In years gone by I have stood in a polling booth scratching my head as to who is who? The major parties have their names on the ballot paper but I didn't want to vote for any of them. Nowadays I am clear as RoW follows the name of each of their candidates. Sorted!!

Manuel Golding
I'm somewhat very curious as to why only the Residents of Wilmslow's (RoW) candidate Councillor Lata Anderson has been good enough to post her details on this site. who and where are the other three candidates? Would it be that their parties have only contempt for Dean Row voters and the democratic voting process that they cannot be bothered to tell us about themselves? Shame on them!
It appears that only RoW is, as it's name implies, for Wilmslow and its betterment for all those who live in the rown; what I've seen of the opponent's electioneering leaflets they are almost exclusively focussed on national politics not issues that concern the folk of Wilmslow and Cheshire East Counci. ONLY RoW has told us what it has done and hopes to do for Wilmslow in the foreseeable future.
Some of Lata's opponents are reliant on their party's supporters from outside Wilmslow for electioneering assistance canvassing.These people will know nothing at all of the issues facing Wilmslow except what they have been misinformed by their regionaonly officials (who will be only concerned with national matters).
So Dean Row voters beware of their propoganda misinformation; only RoW knows Wilmslow's concerns. Or to partially quote a famous advert- Residents of Wilmslow does what it says it's name does on its leaflets it acts for Wilmslow.