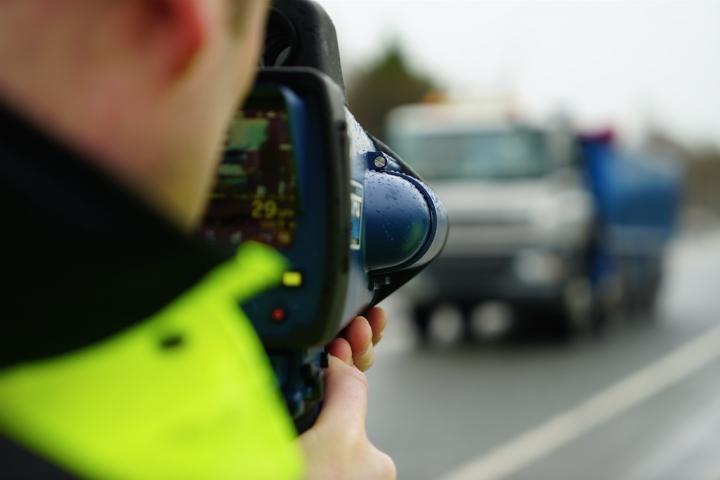 Having caught a motorbike travelling at 55mph as it headed out of Wilmslow on Saturday, 15th August, PCSO James Hails recorded a car travelling at 63mph in the 30mph limit whilst carrying out speed enforcement on Saturday, 29th August.

The speed enforcement was carried out on Prestbury Road in Wilmslow between 9am and 10am, during which time 56 vehicles were recorded travelling over the 35mph in the 30mph limit.

Of these two were exceeding 50pmh, with one travelling at 57mph and the other at 55mph. Aditionally, 21 vehicles were recorded travelling over 40mph in the 30mph limit and 32 were going over 35 mph.

Graham Peters
At last the Police are doing something positive about speeding on this road! That particular section of road is fairly wide and a number of times when I’ve been driving along there at 30 you get ‘hounded’ by cars behind eager to stick their foot down. I’ve even been overtaken as soon as the 50mph sign is in sight. The next speeding hotspot is at the other end of Prestbury Rd - by Greendale Lane - Withenlee Rd to Prestbury village. All signposted 30mph for what it’s worth!!
Great revenue spinner as well for the Local Authorities.

It isn't. As I pointed out on this site a few days ago, speeding fine revenue goes to the government, not the police or local authority.

Kathryn Blackburn
I do wonder at which part of Prestbury Road these speeders were caught
because at the top end going towards Prestbury where it becomes 50mph and if they were accelerating towards reaching that speed was is it a fair cop ?

Pete Taylor
@ Kathryn Blackburn; a couple of weeks ago you were on an anti-cyclist rant, now you appear to be condoning 63 in a 30 limit because it "might have been accelerating to a 50 limit".

Bob Bracegirdle
Excellent. Keep it up and more might gradually begin to understand.

David Smith
Kathryn Blackburn:
Honestly - on what planet did you pass your driving test? Assuming you have passed one that is! If so, you need to buy a copy of the Highway Code and study it all again. The speed limit on a road changes when you actually PASS the sign and not as soon as you SEE the sign ahead that announce a change in the limit. If the motorists were accelerating towards the new limit after having passed the sign then that would be ok so I don't understand what you are trying to say.

Laurie Atterbury
Speed doesn’t kill; it’s suddenly becoming stationery that does you in .....

Marcia McGrail
Reginald Molehusband strikes again. The concept of maximum speed in a limited zone appears to go over most drivers' selfish heads.
Perhaps if automobile manufacturers put as much creativity to the safety aspect as they do to their overbearing headlights, the priority would be tilting in the right direction.

Graham Steel
Good work, but a ban of 7-90 days feels far too little. I was regularly cycling along that stretch before lockdown and working from home.

Pete Taylor
My sat-nav knows exactly when I go from one speed limit to the next; presumably the technology is in place to automatically speed limit new vehicles to the place they are?

Kathryn Blackburn
I am and do not condone going over 50 mph in a 30 mph zone. Not at all that is an unsafe downright dangerous driving habit. However only three of the 56 drivers were.

As we all know that is a short stretch of road between two 50 mph limits and makes for an easy speeding target particularly at either end of that stretch when de-accelerating out of or accelerating into the 50 zone. Cars today are more powerful than ever and it is takes less than a second to breach the limit.

David Nelson
Too much ranting. Speeding is speeding and illegal. End of.

David Smith
OK Kathryn - I bow to your superior opinion that would perhaps put all the blame on the car and no responsibility on the driver who should be in control.

Paul Tracey
In a single hour, 56 vehicles were travelling over 35mph in a 30mph zone. 24 of those were going over 40mph.

Mark Russell
David. Speeding is not illegal it’s a traffic offence. It becomes a legal matter when something like dangerous driving is added to the mix.

I’m not sure what point you’re trying to make but, if the legal speed limit is 30 mph, then driving at 35 mph is “illegal”

Could you be getting confused with criminal vs civil offences?

The fact remains that getting hit by a car is painful, the faster the car the greater the pain.

David Smith
Thanks Alan - a spot of over-enthusiastic posting by Mark perhaps?
Incidentally Mark, I am still awaiting your reply to the question I asked you at the following link:

I see that the post has now been closed and so a direct reply is not possible, but if there is no objection perhaps you could post a reply here? Social media sites are all very good but do need true and correct factual information to be posted and if anyone believes this not to be the case then a request for validation should be answered so that nobody is left with duff information that they then believe to be true.

Ade Whitaker
It's good that speeding is being taken so seriously but isn't there any technology that could free up police resources to focus on other priorities : burglary, car theft, domestic abuse, knife crime etc.? Some "average speed" cameras on the main problem roads maybe?

Kathryn Blackburn
Until 2005 Prestbury Road was NSL some of you have short memories or haven't lived here long enough to know. So what used to be legal is now illegal. Not advocating dangerous driving advocating driving safely for the conditions on the road.

Mark Russell
David Smith. Wow , how have you slept for the last two years? All modern planes can fly themselves. Airbus and Boeing.

And as your pathetic comment about my comment, do your research first. Because you look silly when you mug yourself off.

David Smith
Thanks Mark for your reply - at last! It's taken you long enough but you still haven't answered my question so here it is again:

"Which specific aircraft types are able to take off, fly and land without ANY input from a pilot?

An aircraft 'type' is not just the manufacturer [Boeing or Airbus as you say] but the specific model -- Airbus 320, Boeing 767 for example. So please can you be more exact and quote which aircraft you believe is capable of flight WITHOUT ANY input from a pilot? To back up your claim it might be pertinent to outline briefly your knowledge base that qualifies you to inform the general public of such important information - so they can judge if you know what you are talking about.

Mark Russell
David, I can see what your getting at. A pilot has to input info into the autopilot system, however, that could be done remotely. (If pilots were not on the plane) Here is an example of how it works below. Your playing on words whereas you know exactly the point I was making. A pilot sits there and monitors the plane (no input to take off/fly/land)

I don’t need to give you my credentials as a) I was talking to you not the 70 million residents of the uk b) anything anyone says can be checked quickly enough now a days and challenged.

Which you have done, well done.

Ps. I notice you didn’t mention my comment re speeding, considering this is a speeding thread makes me wonder what your motive is?