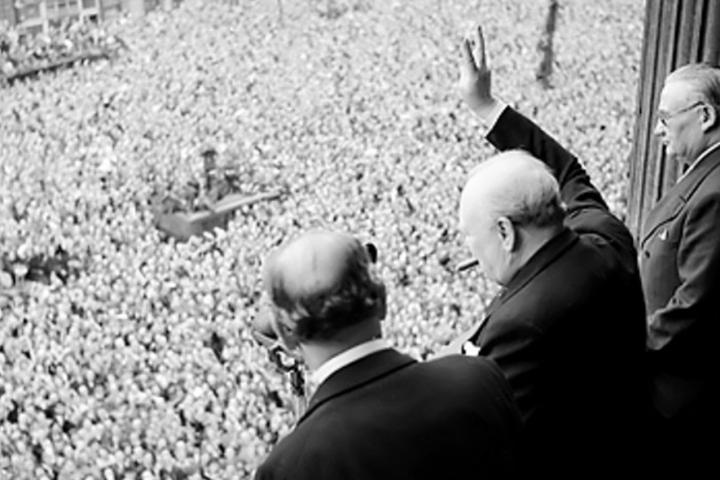 At Reims in the early morning of 7th May, Supreme Allied Commander General Eisenhower accepted the unconditional surrender of all German Forces. The British people heard the news later in the day and a national holiday was declared for the 8th.

There had been a tension in the village throughout Monday - an air of expectancy. On receiving the BBC news broadcast, the area reverted to its old self - there was a real buzz - queues and pedestrian hustle and bustle. Local newspapers at the time believed that some bunting was surprisingly found, making up a little for the wartime lack of colour. Bright fairy lights mainly arranged in the letter V appeared. Cinemas and pubs were filled. A bonfire was lit on the Carrs and it illuminated the sky a few minutes before midnight; several hundred attended. Fireworks were set off. Popular songs were sung by some of the throng. Even babies in prams stayed up until well after midnight. Children were also entertained by a Moor Lane bonfire provided by Messrs Cunliffe and Jones - an effigy of Hitler was burned. Despite rationing, children in the area received some ice cream and sweets and on the Wednesday street parties were held. A well-attended Thanksgiving Service was held in the Carrs on the afternoon of the following Sunday.

These euphoric days were remembered by all who witnessed them. It meant an end to nearly 6 years of a destructive conflict that had cost the lives of millions. Suffering and privation had been everywhere.This major milestone did not however end the war nor was it an end to the impact it had on the world and its people. The man of the hour, Winston Churchill said "This is your victory ... We may allow ourselves a brief period of rejoicing: but let us not forget the toil and efforts that lie ahead." The war in the Far East continued until the Japanese surrendered formally on the USS Missouri on 2nd September. Indeed many Cheshire lads serving in this theatre of war did not return home for several months.

Not everyone joined in the revels. It was a time to reflect on those who had lost loved ones. Our area sent many men and women to serve in the armed forces - tragically 48 did not survive. Local men who had fought in the Great War were mostly ordinary "Tommies" in infantry regiments. In 1939 - 45 it was different. Of the 48 who were killed, 34 (71%) were officers and NCOs and a third (16) actually served with the RAF. Of particular poignancy was the death of Fl Sgt Arthur Andrew Bradley of the RAF Volunteer Reserve, who after many raids over Germany was killed in the last Allied raid on Kiel on 3rd May. His brother Cyril, who died recently, told us that his mother, Beatrice of Morley Green, kept a light in the window for many months convinced he would return.

As mentioned in an earlier article from 1938 onwards Wilmslow was home to a large RAF training camp (No. 4 School of Recruit Training). Thousands of recruits were received there, being kitted out and undertaking basic training. Usually they spend 2 months here before being posted elsewhere, of these many were females in the WAAFs.

The role of women was crucial to our success. Sadly there is the name of one lady on our civic memorial - Chief Wren Phyllis Bacon, aged 21. She died when her ship, the Aguila, taking radio and cipher clerks to Gibraltar was torpedoed by U-boat 201 in neutral Portuguese water on 19th August 1941. She is also remembered on the Plymouth Naval Memorial.

Many from abroad supported our war effort - lots of Americans were in the county. The 503rd USAAF Military Battalion were based and billeted in Alderley Edge for example in the College Flats (now The Merlin). Local people remember them mainly as polite, charming and exceptionally generous with gifts - foodstuffs and the all important chewing gum, chocolate and nylons. Major Glenn Miller played at the Cottons Hotel in Knutsford, the HQ of General George Patton. Rookie paratroopers were flown from Ringway and dropped in Tatton Park.

Times were hard for locals at home - with gas masks, air raid shelters, ration books and some had evacuees from Manchester. Women working everywhere were doing the jobs of men. Two bombs dropped on the village - one near Twinnies Bridge and a 1,000 kg landmine floated over Grove Avenue and the Conservative Club in 1941 falling in Wycliffe Avenue. The entire area was cordoned off before the device was exploded 7 days later. Cyril Bradley remembered that he and his mates spent many hours looking in the area for shrapnel as souvenirs.

Finally, some additional points of local interest. Wilmslow made international headlines on 5th November 1939 when Oswald Moseley addressed supporters at the Rex advocating peace initiatives with the Nazis.Jeering and violent disturbances occurred outside.

The village of Morley Green played a full part in the war effort housing a large Prisoner of War camp of Italians at Dooley's Lane. Also the site where the Social Club is now was used to prepare school meals for the entire area - Wilmslow, Alderley, Styal etc.

To show how very serious the situation Britain faced was, one of 500 secret bunkers was built by the Royal Engineers in a back garden on Gravel Lane; this was to house personnel to coordinate resistance in the event of invasion. Additionally Fulshaw Hall became the Northern base of the Special Operations Executive which conducted sabotage in occupied Europe.

Photo: Churchill waves to crowds in Whitehall on the day he broadcast to the nation that the war with Germany had been won, 8 May 1945.

Marcia McGrail
Thank you for the effort you have taken to bring us these important local insights into a conflict that must never be forgotten or the peace taken for granted.

Laurie Atterbury
Great article re local history, many thanks.

Paul Maddock
Lovely article. With regard to "secret bunkers was built by the Royal Engineers in a back garden on Gravel Lane" I have read much about theses bunkers. During Childhood explorations on the North Side of the River Dean, we found a very large underground bunker - I do not want to give too much away on the location in public! - and have often wondered if this was one such similar WWII 'resistance bunker'. Now discovering there was one elsewhere in the town, I wonder if the historical society would be able to shed any light on this site?