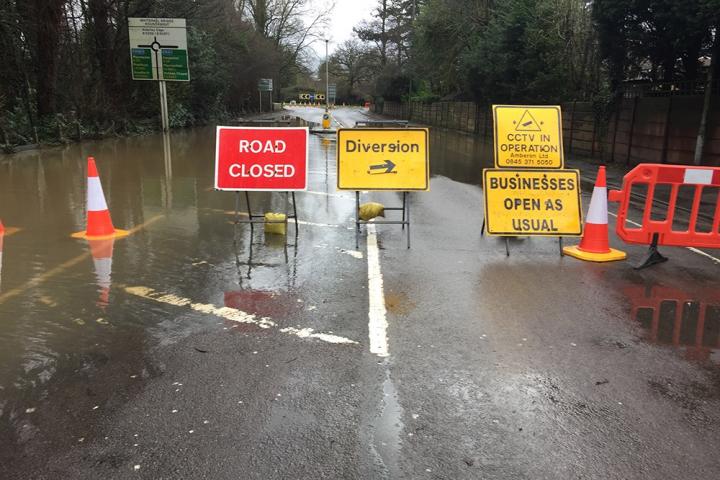 As many drivers will have noticed, Alderley Road remains closed as Cheshire East Highways have not managed to carry out a drainage investigation which was scheduled for Saturday 22nd and Sunday 23rd February.

One of the main roads into the town was closed at the weekend to enable Cheshire East Council to investigate the flooding issue on Alderley Road, which occurs each time there is heavy rain.

However, the section of Alderley Road from the Harden Park Roundabout to Fulshaw Park South was flooded again at the weekend, for the 13th time since last July.

A spokesperson for Cheshire East Council said "The roadworks have been delayed by heavy rainfall causing flooding on the road.

"The investigation work has therefore been postponed until the flooding has subsided."

Although the photo above of the signage taken on Sunday would seem to suggest the diversion is via Fulshaw, which would explain why lots of cars were turning up there.

"What we suspect has happened is that road users have tried to find alternative routes avoiding the official diversion."

Drivers are advised to avoid the A34 Wilmslow Bypass in the morning rush hour if possible, as it as been very busy the past two morning. It took me 20 minutes to travel from the Harden Park Roundabout to Wilmslow High School on Monday, 24th March, where I came off and went the back route, luckily this morning I could see the queued traffic as I came round Harden Park Roundabout so I went back into Alderley Edge and via The Hough.

Tuesday, 25th February 5pm - I understand from on of our readers that the Council has now reopened the road.

Jon Newell
I see from today’s Times that the head of the Environment Agency is advocating building on flood plains but saying put the garage on the ground floor.

He is behind the times. As most of the high/medium density housing developments show, garages are a thing of the past except for the very biggest houses. You get hard standing for one or two cars. When this is coupled with a bedroom in what used to be a loft, parking becomes an enormous issue especially as housing costs and lack of affordable starter homes forces occupation by multi generations.
Front gardens will be a distant memory and our urban environment will be the worse for it.
At least, so far as most of Wilmslow domestic properties are concerned, flooding is not a risk.
Or is it? We don’t know what the proposed Royal London and Wilmslow Business Park developments will do to Fulshaw Park but it might be an idea for residents to invest in light and movable furniture. The planners never expected Alderley Road to flood.

Jerry Dixon
Jon, you are absolutely right to voice these concerns. The hydrology modelling in relation to developments, including the Wilmslow and AE bypasses, is all desktop based. I notice that the required 20% 'headroom' for climate change [which applied when the AE bypass was built and resulted in the containment ponds near Ashford Road being the size they are] has now been increased to 40%. Not a minor increase, and one which prompts the question of just how reliable, in real-world terms, these hydrology calculations really are.
Nobody would find solace in being told the hydro model was correct when their furniture is floating in the front room.

David Jefferay
I have been advised that the road is reopening today but I haven't been down to check.

Ade Whitaker
Just wondering what happens on the frequent occasiowhen this major road in and out of Wilmslow is under water? Do we have to wait for it to drain away / evaporate naturally ? Or - do the fire brigade (or other relevant public service) come along armed with pumps and sort it out proactively?

David Jefferay
Ade, the reason the road was scheduled to be closed this weekend was for investigative work to work out how to fix the flooding (not because they knew it was going to rain so it would flood). Ironically, flooding stopped them doing it.
I have just spoken to the highways officer responsible for it and he knows my plan is to keep pestering to make sure that the work gets rescheduled and doesn't drop off the radar until next winter.

Alan Brough
The road is open this evening and no sign of flooding.

James MacDonald
Incompetent would be the politest way of describing the management of this issue. The forecast was for rain and the area regularly floods. They could have organised a tanker to pump the water away and carried out the investigation. The diversion was inadequate, it should have been from The Kings Arms down Knutsford Road except for residents.
We still don't have an investigation or a solution or a timeline. How many people were paid for the weekend 'work' that didn't actually occur except for the inappropriate signs and cones?
The signs in the picture:
Road Closed - acceptable
Diversion - pointing to Fulshaw Park, unacceptable and only for residents
CCTV in operation - really? I don't think so
Businesses open as usual - Is this a self-deprecating comment about Cheshire East council / highways?