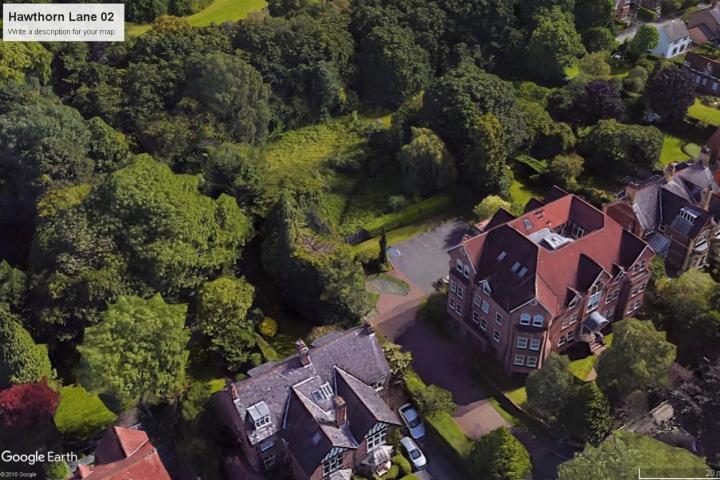 Approaching 100 objections have been submitted against plans to create a new car park on land to the rear of Heald Court on Hawthorn Lane.

Mike Cooksey of Village Heritage Homes has applied to build a car park providing around 90 long stay spaces which are intended for business contract users. The site, which lies within the conservation area and is designated as residential land, has been vacant for almost 30 years.

At the time of writing, 90 objections have been sent to Cheshire East Council along with 16 letters of support.

A resident of Hawthorn Lane wrote "This is a residential road within heritage zone of Edwardian mansion houses. The area behind the flats is onto the ... park bordering on the Bollin valley an area of natural green land. A 90 car area will congestion an already congested road, particularly opposite Kennerleys lane. The road has calming measures in place, frequently is used as a 'rat run' to avoid traffic lights on water Lane. This is an inappropriate use of land in this area, will lead to further congestion and noise to residents. Is not in keeping with heritage status."

Another resident of Hawthorn Lane stated "This land sits within the Hawthorn Lane Conservation Area.Hawthorn Lane already has traffic calming measures to discourage its use as a 'rat run'. The road is heavily used as such and also by traffic to Pownall Hall School and Gorsey Bank School.

"The prospect of at least a further 90 vehicles , at least twice per day, driving along the road, waiting to turn right right into the proposed car park and waiting to exit, would bring the road to a standstill. This is already evident at the junction with Kennerleys Lane. There are already designated car parking spaces along the road."

Another resident said "I live on Hawthorn Grove and already the traffic is congested and indeed unsafe coming out of post office junction. Also what is the guarantee that this site will not be developed as housing in the future?"

A resident of Carrwood Road commented "I think it would be a disaster! Hawthorn Lane is already a nightmare, especially between Kennerley's Lane and the Zebra crossing at the Grove Street end. And rush hour the queues sometimes go back almost to Carrwood Road! The various traffic calming measures add to the problems unfortunately."

Whilst, 16 Wilmslow residents wrote in support of the application which they felt will help to alleviate the parking problems on roads in Wilmslow.

A resident of Buckingham Road wrote stating "I am a resident in Wilmslow and experience the problems with parking on a daily basis. The road I live on is full of cars parked on weekdays. The volume of cars on both sides of the road changes a two lane road to a single lane highway. It makes crossing the road potentially dangerous, pulling out of driveways very difficult and makes things very tight should a fire tender need to use the road.
"Some vehicles park on the pavement, making access for wheelchair users and prams challenging or impossible. Particular vehicles regularly park on corners of cross roads and side roads, making pulling out of junctions difficult/dangerous for other drivers and pedestrians.

"I understand that people who drive into Wilmslow for work need to park and that they currently have very little choice other than to park on residential streets. This development would go some way to addressing the issues above, helping make residential streets in Wilmslow safer and usable for all."

Another resident of Buckingham Road felt it was a brilliant idea for long term parking in Wilmslow, stating "Please make the parking charges reasonable then it will be used, thus freeing up residential roads which are a bottle/neck & unsafe."

A resident of Leeside Way also supports the application saying "This application makes use of land which is otherwise being unused while also helping to add much needed long-term parking to the town. While 90 paid for parking places will not solve the problem of weekday parking on residential streets around the town it should be supported. The planned development requires no public money and can only benefit the town. The developer's proposal to allow public use of the car park at weekends should be a condition of any consent granted, as too should be the provision of EV charging points."

On submitting his application Mr Cooksey said "There can be little doubt that car parking in and around Wilmslow town centre is in crisis. It is frequently the number one talking point.

"Although the Council is investigating the situation, as far as we can glean, the report being prepared will have limited effect even if all the anticipated recommendations are acted upon."

He added "The report is not demand led and looks only at potential for land etc in public ownership, with minimal reference to managing what is there already.

"Crucially, there are current proposals for traffic restrictions on key feeder and residential roads in the town centre, which would remove up to 254 spaces currently available. In addition, the potential redevelopment of the Tesco site would appear to remove 20 on-street spaces and create a demand for more off-site parking for the mixed development, including a hotel.

"This parking proposal considers the potential for a key edge of centre location in private ownership and that would offer a significant level of off-street parking provision that could be quickly delivered at no cost to the public purse."

Several previous applications to develop the site for residential use have been refused on Conservation Area grounds and subsequent appeals have been dismissed.

The plans can be viewed on the Cheshire East Council Planning Portal using reference 20/0182M. The last date for submitting comments is 27th February and a decision is expected by 12th March.

What do you think about the plan to build a car park off Hawthorn Lane? Share your views via the comment box below.