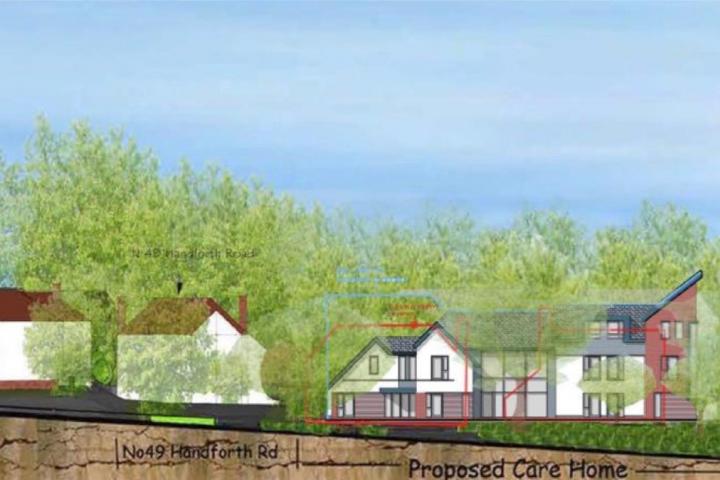 The decision on revised plans to demolish two detached residential properties in Wilmslow and erect a care home was deferred by the Northern Planning Committee this week.

Cllr Iain Macfarlane explained "The committee were supplied with diagrams and drawings showing the new elevations which would reduce the height of the proposed development on the front two storeys and 'would appear as two detached dwellings connected by a lightweight glazed link'."

The subsequent debate resulted in a 5:5 tie after which Cllr Craig Browne, chair of the Northern Planning Committee, abstained and invited further debate.

Cllr Iain Macfarlane added "In an attempt to move things forward an amendment was proposed for the application to be deferred to allow the council's design officer to look at possible ways of making this glazed link between the two buildings lighter and less visible from the road. This amendment to defer the application was passed by a majority vote."

However, the second scheme was met with strong opposition with 84 letters of objection received and was refused by the Northern Planning Committee in April 2019. Members of the Northern Planning Committee unanimously agreed that it was an overdevelopment of the site, which resulted in a lack of car parking, an overbearing impact on neighbouring property because of the bulk and massing as well as being out of character with the street scene.

There has been a subsequent appeal to the second scheme which was dismissed due to the visual harm to the street scene and harm to the character and appearance of the area.

Members of the Northern Planning Committee voted to defer the decision on the application for the proposed care home on Handforth Road by 8 votes to 3.

Steven Kingsby
A disgraceful decision by the Planning Officer.

Numerous times people have commented on how out of touch these "outsourced" planning officers are and this just confirms it.

They obviously do not read any of the objections on the Planning website and go on there merry little way, back to her house not anywhere near this proposal.

Steven Kingsby
I implore the Planning Committee to read the many objections to this proposal.

It is NOT the main issue of the glass frontage and its aspect from Handforth Road. We don't want it no matter its appearance.

It is about the mass, the scale and its situation in entirely the wrong place. Loss of privacy, noise and pollution to neighbours and residents.

It is not needed either, there being numerous vacancies in care homes in the local area.
There was no mention of the plight to the neighbours and to local residents.

There has been massive support to reject this monstrosity so please take note and reject it once and for all. People come before profit.

Stuart Redgard
I applaud Cllr Craig Browne for abstaining. My personal experience of attending planning committees was that the chair of the committees would vote along party lines when it was a conservative lead council.

I hope that they eventually refuse planning permission again. Then the applicant can appeal and the decision will be made by a truly independent source (The Planning Inspectorate).

However, the Secretary of state could always overrule them!

Oh how the planning laws are a law unto themselves!

Pete Taylor
Who were the five Councillors who voted FOR this development?

Geoff Ferguson
I agree with Steven, the issue is not about a glazed link, it is the fact that this development is not needed in this location. One only has to read all the letters of objection to understand the impact of construction and operation of this business in what is a residential area will have.

This needs to be rejected once and for all.

Chris Neill
I tell you what......we sit here watching the systematic destruction of rain forests , and most people agree how terrible it is for nature and the planet, driven by greed, corruption and massive over development.......,..We,re only a little, tiny corner of the world, but what's the difference?

wonder which five voted for this development and why ?

Gina Thompson
Another and most important problem is that we do not have enough Doctors to cope with another 60 demanding patients.
I had hoped with the change of control in Cheshire East we would have better decision made.

Jean Berman
I totally agree with all of those that have made a comment on here .We don’t need it our doctor’s surgeries are over subscribed now ! And yes it would be interesting to know which councillors back it ?? May be they are the ones that agreed to the stupid roundabout that was put there a short time ago ! Maybe it was done in readiness

Secondly, at the previous planning meeting the same Councillors, unanimously voted against this over development. At this meeting five of these Councillors voted for acceptance, DESPITE THE FACT THIs OVER DEVELOPMENT WAS LARGER THAN THE PREVIOUS PLAN, THEY REJECTED. As a layperson, I would need to wonder why?

At the planning meeting, the planning officer completely ignored the many objections. Would she be so keen to push for acceptance if this site was next door her house.

The planning officer also completely ignored the Councils own requirements for parking. This development is short of approximately 12 spaces. She also accepted the developers statements, without checking them and have now been Provan to be fabrications. For example, the developer compared the parking situation, with parking at Hazelmere Home in the Summerfields estate, they said that parking was sufficient and never overflowed. Another fabrication, I pass there regularly and submitted photographs to back up my objections. The photographs show 11 cars parked outside, on a quiet road, which is nearly two metres wider than Handforth Road. The parking problem should have been evident to the planning committee, when they visited the site, they parked outside and caused real traffic problems, with drivers blowing their horns and that was at 11.30 in the morning. Imagine the chaos in the rush hour and the potential danger to the many children and pedestrians using this busy road.

This development has been disguised by the developer to look like a two storey building, when in fact, it’s a three storey building. The architect drawings were misleading, as they did not show the full frontal view. One of the more experienced Councillors spotted this attempt to mislead and voted against the development.

Furthermore the developer said there was a need for this development, I would urge the Councillors to spend a few minutes on Google, every home within a fifteen mile radius of this home has vacancies. Another fabrication, which was accepted by the planning officer without checking the facts.

I was rather dismayed at the whole procedure. It seems to me, it is geared against the very people who would need to live with this monstrosity. For example, if permission is refused, the developer can appeal, however if permission is granted, the objectors cannot appeal. Totally unfair in my view.

In conclusion, I am at a loss to understand, why every Councillor voted unanimously against this development at the last planning meeting, because of the size and mass of the building. Now five have voted for the development, despite the fact it is larger. I am also at a loss to know why a planning officer can recommend acceptance of something she has not seen. She has voted for something which will cause misery and inconvenience to everyone passing of living near this site.

Would she or the five councillors be so keen to push for approval, if it was next door to their house?

I hope they come to their senses and refuse permission, before they cause massive damage to a nice road.

Pete Taylor
Why are the names of which way these Councillors voted not automatically in the public domain- why should they be secret? These people are supposed to be representatives of their constituency electorate. I'm reasonably sure that the Councillors who live here plus others who bothered to read the objections comprise the five against.
Why would anyone from outside the area vote "for" given the obvious local objections?
If we knew the names of the five who voted to approve, it would be easy to see if they have any "declared interests" on the CEC website.

Time for the "under new management" CEC to really become open and honest. Let's have every single vote a named vote, available to all the electorate.

Iain Macfarlane
I was elected to CEC in May and then joined the Northern Planning Committee. I was not involved with the earlier application for this care home.

The Northern Planning Committee have asked that figures and numbers showing the need for this care home are available before the next meeting. Also they would like to see an artist's impression from Handforth Road showing effects to the street scene from the front.

Bill Bennett
Cllr McFarlane, I thank you for voting against this massive over development. I would urge you and your fellow councillors to read the very many objections and to the read the full rejection reasons by the planning inspector. There were a number of reasons for the rejection. Please don’t believe what you have been told by the developer and the planning officer, or indeed me. Check for yourself.

The developer tried to justify the lack of parking by claiming a number of staff will come to work on the bus. Arriva, are stopping the 130 service on the 26th Jan, 2020. There will be no buses passing this site after that date. That can only lead to increased parking problems.

This site is a residential area. The residents have a right to enjoy a peaceful life. This development would not allow them to do so. I would urge you and your fellow Councillors to reject this over development.