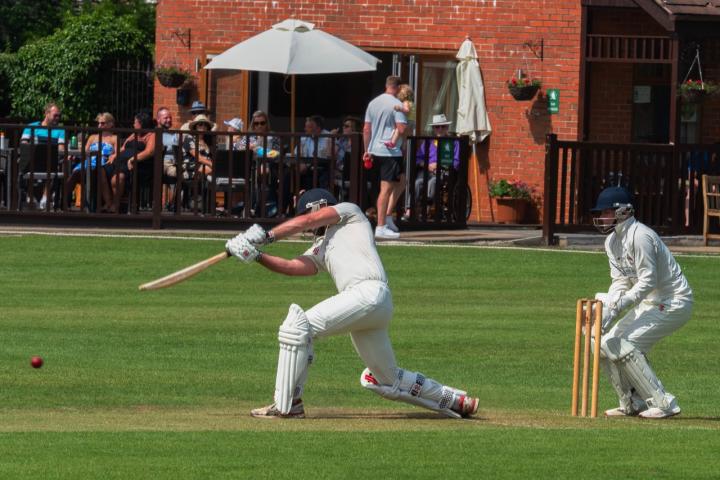 The long awaited top of the table clash between Lindow 1st XI and Warrington didn't disappoint. A pulsating match which swung one way and then another, eventually ended in a Warrington victory in the most dramatic of last ball finishes.

Having won the toss Lindow batted first, but at 26-3 they were struggling. Major Khan (26) and Ian Park (20) offered some hope, but at 86-6 things weren't going to plan. From here Alex Matthews, the Lindow captain, led from the front with his best innings for the club. A fantastic 94 off just 66 balls gave Lindow a chance in the game as they closed 202 all out.

As the Warrington innings began the next twist in the tale occurred as Lindow's opening bowler, Saleem Akram, who has been excellent all season, was taken off injured. Instead Lindow turned to their spinners and Tim Affleck (4-47) and Sully Raja (3-34) looked to have done enough as Warrington reached 130-7. Credit to the visitors though they kept going for the win and the scene was set as they needed 14 to win from 14 balls with one wicket in hand. A full house crowd waited in tense anticipation.

With two needed from the last ball it looked like the game would end in a tie, but a rush of blood led Lindow to miss the easiest of run outs and Warrington got home for a dramatic victory. Tough on Lindow who have been excellent for the first half of the season, but they still sit top at the half way stage and must now focus on another big game against fourth placed Mobberley at Upcast Lane on Saturday.

Lindow 2nd XI travelled to fourth placed Widnes looking to get back to winning ways. Batting first Lindow set 207-7 with 37 from Hassan Rashid and an important 30 not out from Ben Hamilton-Ryan.

Lindow opened the bowling with two club juniors, Tom Rae (1-23) and Ben Hamilton-Ryan (1-13), and both struck early to remove the Widnes opening batsmen. Some middle order resistance from Widnes looked like the game may end in a draw, but excellent bowling at the end from Rowan Day (3-11) and Jamie Peel (2-11) saw Widnes bowled out for 172, giving Lindow an excellent away win.

Lindow 3rd XI put in a fine display against second placed Heaton Mersey Village 1st XI. Bowling first Lindow removed the visitors for 177 with Tom Orr (6-45) and Connor Roxburgh (4-30) sharing the wickets. Lindow wrapped up a seven wicket win thanks to 81 not out from James Wild, well supported by Hassan Mahmood (27) and David Kendrick (28). The 3rd XI are fifth at the half way stage.

On Sunday a senior career best score of 85 from Henry James, along with 52 from Peter Venables, 29 from Max Espley and 21 not out from Tom Wilson, saw the Lindow 4th XI to 225-3 against Macclesfield. The bowlers wrapped up the win with Simon Rowland taking 4-12 and Paul Wilson with 3-19.

Photo: Alex Matthews on his way to 94 for Lindow 1st XI (credit to Ian Tasker).