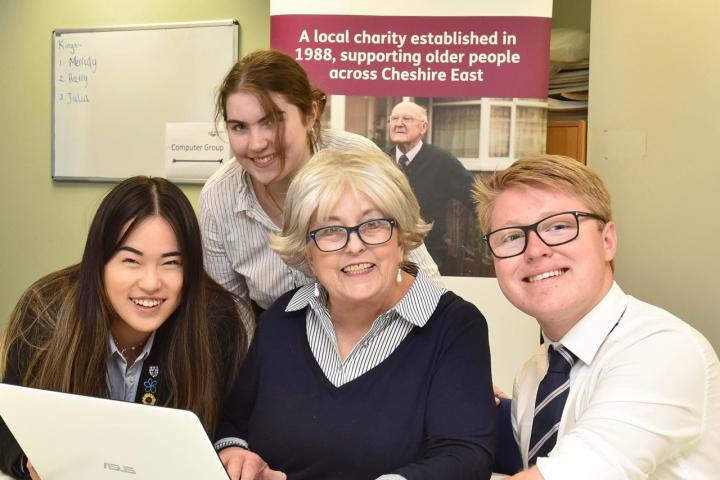 Six teenagers from King's are using their Wednesday afternoons to volunteer at Age UK East Cheshire's HQ in Macclesfield. While their counterparts may be hiking on the hills, playing sport or even learning car mechanics as part of their enrichment programme, those volunteering at Age UK are teaching IT skills to the older generations, using skills that come as second nature to the younger mind but are more difficult to grasp as the years pass.

Some 5,000 older people aged over 50 use AGE UK's services every year, which service an ever-growing demand for practical advice, social activities, education and mental stimulation. The charity has an annual budget of £1.1 million, self-generating all but a £16,000 grant from East Cheshire Council for their Men in Sheds project, so as Chief Executive Damon Taylor said: "Our volunteers are the lifeblood of the organisation."

Deputy Karen Wilson, who initiated the link with the King's School, added: "It's wonderful to see this intergenerational project working so well. Whether teaching IT skills or providing support in our dementia care unit, the teenagers are an invaluable resource. Our clients love learning from them and listening to them and I think the young people enjoy the experience too, finding out about their lives and some of their experiences."

One client, Sheila Smith, from Higher Hurdsfield, who is now in her early seventies, has been getting tuition from the teenagers on how to boost her cottage business.

Sheila said: "I have done so many different things in my life, but I suppose most notably I ran an antiques business, selling fine old lace. I have no-one at home to show me, but these wonderful young people have made it so easy for me to use EBay so I can sell off my old stock. It's become my hobby really and it's thanks to them I can navigate this modern world. I wouldn't have believed that I could do all this and they've made it so easy.'

King's student Merridy Russell, 17, who even comes in to help during the holidays, said: "Actually Sheila's business is not dissimilar to that of my parents and it's great to be able to help. Like most young people I use my phone and computer a lot and it's seems simple to me, but I grew up with this technology and Sheila didn't."

Julia Harman, 17, said: "It's great to come to a part of Macclesfield that I have never seen before both geographically and metaphorically. I've never worked with older people before and I am learning so much from them too."

Harry Newsome, 17, added: "I have been taught by older people all my life and for me it's wonderful to be the teacher for the first time."

The King's teenagers also volunteer in Age UK's dementia club, playing games and providing companionship. Zilpha Wood, 16, said: "It's so nice so come and give something back. I love chatting to them all."

Harry Weetman, 17, said: "I just try to be cheerful and light-hearted. I feel I get so much more from the project than I am able to give back."

Zilpha and Harry were shown the ropes by Age UK's long-term volunteer Jean Bennett who has been helping for 16 years and said: "I just enjoy it, everyone should do it and the older people, me included, love getting to know the younger ones."