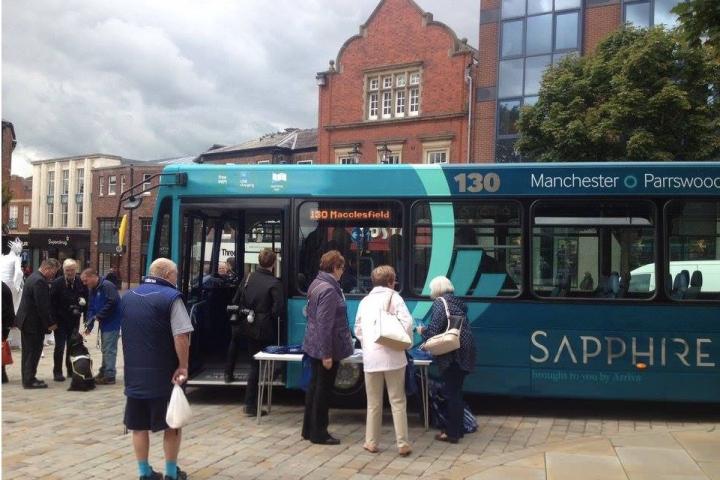 From next month local residents and commuters will no longer have the option of catching the 130 bus to Manchester.

An Arriva spokesperson commented: "We can confirm that, from the 28th October, changes to the 130 service will come into effect and will operate between Macclesfield and East Didsbury. The changes follow a period of low passenger numbers, which has made the service no longer commercially viable to operate.

"Arriva has made every attempt to save the service, including extensive negotiations with Cheshire East County Council to provide subsidised funding - which unfortunately was unsuccessful.

"Arriva is hopeful that these changes will help future-proof the service, and will review the success of the route alteration in January 2019, with a view to extending the service."

Arriva reduced the 130 bus service from a half hourly to a hourly service between Macclesfield, Alderley Edge, Wilmslow, Handforth and Manchester in January 2018 then withdrew the Sunday service at the end of March 2018.

Howard Piltz
Another nail in the coffin for public transport in Wilmslow. I know usage is low in a relatively affluent area but Cheshire East Council has refused to acknowledge the needs of the not-so-well-off, as well the infirm and elderly and as a result will pay the price at the next local elections.

Hannelore Hartig
I hope that means we will be able to use the bus pass on the Tram, otherwise, why penalise the elderly, who need to get to Manchester Hospital, or even do some shopping in Manchester, and will now have to pay on the tram.

Simon Lomas
An absolute disgrace by Cheshire East at one time there were four buses an hour through Handforth now there is one every hour. Instead of spending money on flowers concentrate on the important things like public transport .

Gemma Evans
The underlying problem is the council don't want to take the unpopular decision of removing pensioner's bus pass privileges but also don't want to reimburse operators properly for accepting them. Reportedly one of the reasons Stagecoach stopped running the 378 to Wilmslow was they got much poorer reimbursement for bus passes off Cheshire East than off TfGM.

Someone recently showed me a response they got from Cheshire East council regarding the poor frequency of 88 services in the morning peak and the fact that some services have more passengers than seats. Their response was along the lines of "You've got a bus service so what are you complaining about?"

Manuel Golding
Residents of Wilmslow have long told CEC & its planning apparatchiks that when giving planning approvals (on Green Belt in Wlm & Handforth) for hundreds of new homes, it first needs to address the all too obvious need for planning the infrastructure.
Part of that infrastructure, schools, roads, medical services, emergency services, public access including public transport.
Now we see yet again the value of CECs leadership's concerns for the public's access to a half decent bus service. Manchester is the major conurbation of this region, to be party to severing the 130 route into Manchester is tantamount to a siege mentality and a couldn't care less (let em eat cake) strategy emanating from the CEC leadership. The 130 into Manchester is a life line for some.
The Council leadership is more than happy to pay well over the rate for employing some barely competent senior officers, all on over inflated salaries out of the public purse. Savings need to be made so that some areas of vital public infrastructure be maintained, i.e. 130 nus service.
What are our Conservative Cheshire East councillors doing to protect this service?
On the face of it nothing yet again.
Next May, 2019, the voters can have their say at the CEC elections - now you know what your Conservative councillors have done to you, then will be the time to tell them to get on their bus, their service is being cur.
And vote for Independent RESIDENTS OF WILMSLOW candidates who will fight for their voters needs.
With YOUR HELP we can and will make a BIG DIFFERENCE
- contact us on 07930 377778 or 07846 082660.

Howard Piltz
Two answer to comments above:
You cannot use a Cheshire East Senior Citizens bus pass on the trams but you can on the buses from Parrs Wood
Cheshire East Council CANNOT withdraw these passes, they were a Labour Governments GIFT to OAPs as a bribe to vote for them. CEC can, however, reduce the amount they pay operators for accepting the passes.
Make of that what you will!

Mark Russell
I really dont get the up roar on here about this. For starters, theres more people on here complaining about the service being cut, than actually use it. There is no bottomless pit, so if something isnt needed it gets cut. Im sure we'd all love a bus stop outside our door, and a bus stopping every ten minutes, just in case, but society doesn't work like that. We all complain about the council tax every year, what do you think it gets spent on? Would you prefer another two coppers, or the bus service no one uses? Common sense for me. Society has to work for the many not the few, and unfortunately this is a case where its true. Perhaps if everybody on here complaining used the bus, it wouldn't be going??? People (inc me) give the council a kicking for wasting money, now you are giving them a kicking for saving money.

Gemma Evans
In response to Howard Piltz. The national bus pass scheme (which was introduced by Labour government) only requires free bus travel after 09:30 on weekdays and all day at weekend. Cheshire East additionally allows half price bus travel before 09:30 on weekdays and allows the passes to be used on 'Dial a Ride' style services operated under the D&G Little Bus brand, neither of those are required under the national bus pass scheme. It was Cheshire East who decided to retain those two additional incentives while withdrawing subsides for local bus services. I don't know why they decided that - obviously they think if 80 year old Doris wants to do her shopping at 8am she shouldn't have to pay £3 for the bus but if 23 year old Matthew wants to get to work he needs to buy a car or move jobs.

In response to Mark Russell. The total council funding for all bus services to Macclesfield Hospital is less than Cheshire East spends on chauffeuring the mayor around. They need to get their priorities right - hundreds of thousands of residents in the north of the borough might need the bus to the hospital at some point, while the mayor's car is for the benefit of one person.

Russell Young
So much for the 'consultation' to improve it then.

Pretty obvious that going cap in hand to CEC wasn't going to work, as they just aren't interested to any sort of decent bus service provision.

I await to see what the new timetable looks like and if the (disjointed) hourly service is retained.

Bob Bracegirdle
Howard is like me. He remembers the 29/30/52 running from Alderley to Manchester every 10-15min. The Macclesfield service ran every 30 (15 on Saturdays and summer Sundays) and until 11.30pm. It was the flagship service of North Western and had the newest vehicles. One 52 an hour ran to Alderley Circuit as well. Plenty of usage. Now no one seems to want it. Possibly because the train is so much faster. Now you have nothing but cars polluting the landscape with emissions and, worse, rubber and brake particles from interaction on the road. Now there's a reason for steel wheel on steel rail.

Meanwhile the hourly bus service Macclesfield to Crewe continues, and until 11.35pm too! Also well used on Sundays.

Incidentally you have to be a Manchester resident to use the tram on the bus pass for free. This is a sad reflection on the legislators actually forgetting that there were such things as trams and not making the bus pass cover them by law. Sheffield still honours all bus passes on its trams.

Barbara Hughson
So they stop the buses to Manchester, so more people will have to get the train. Where are they going to park within walking distance of the station? See where I'm going here? A phrase involving organising parties in breweries springs to mind!

A small pint - the trams in Greater Manchester were and are constructed and run with money provided by the Grater Manchester taxpayers, not money from central government or Cheshire. So no reason why Cheshire residents should get free travel on them

Gemma Evans
In reply to Kathleen Morris. GMPTE (now known as TfGM) got grants from the government to cover the initial costs of new Metrolink lines, including the purchase of the trams. They also converted railway lines which had been built using tax payer's money by British Rail and these weren't disused railway lines but ones which had trains running on them until work started on conversion.

Carol Shawcross
I agree with Barbara Hughson’s comment above. If there are no busses to Manchester, then people will catch the train from Wilmslow and the parking problems we are currently experiencing will surely get worse!