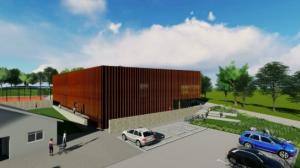 A local sports club could be left homeless as revised plans for the redevelopment of the sports facilities at Alderley Park show no provision is being made for them.

The Astra Zeneca squash club, which has five teams in North West Squash leagues and one in Cheshire Ladies, is now under threat and fighting to maintain squash at Alderley Park.

Jane Wood explained "It has recently come to our attention that the plans for the new Alderley Park sports facility have been modified from the original proposals. These were the plans upon which the planning permission for building 275 houses at Alderley Park was granted.

"The original specification stated that the new facility would be as good, or better, than the facilities currently on offer, and importantly would include three squash courts. This has clearly been down-graded in the latest plans, which now include no squash courts. This is very disappointing and there seems no reason for the change other than saving money."

The scheme which is currently agreed for planning purposes and which is covered by a planning condition, includes three squash courts along with a 5 court sports hall, dance studio, 60 station fitness gym, spin studio, 4 outdoor tennis courts, a cricket pitch, 1 grass football pitch and a floodlit artificial grass pitch.

However, Alderley Park Ltd are now seeking modifications based on a re-evaluation of need and they have recently submitted a planning application to construct a leisure centre in the centre of Alderley Park between the Parklands building to the north and the new residential development to the south - which does not include any squash courts.

The new scheme includes the demolition of two blocks and the creation of a sports and leisure hub comprising of a sports hall building, including exercise studios, and outdoor facilities including three tennis courts and a 5-a-side 3G football pitch, new vehicular access, car parking and landscaping.

According to the updated Sports Needs Assessment the existing squash courts are operating at about 40% under capacity and "there is significant local existing provision and no clear identified need for the re-provision of squash courts."

Over 100 letters have been submitted, from members and supporters of the club showing their support for the continuation of squash at Alderley Park.

Pete Ceuppens wrote on behalf of the Club AZ squash section to formally object to the current plans stating "Planning permission was only granted with the understanding that a replacement, or enhanced sports, facility would be provided.

"The developers are now seeking to go back on that decision, and have based this upon arguments that not only misrepresent current, but also likely future usage. Furthermore, much of the data does not recognise the nature of this amenity, which supports the growing workforce at Alderley Park."

He continued " There are many factual errors in the "Sports needs assessment" made by NAA, that all minimise the apparent use of the facility. This could have been avoided if the Squash Section had been consulted, as specifically required by Sport England. This is clearly a biased document, and not fit for purpose. The courts have a good usage rate and arguments of "underuse" and "surplus to requirements" are based on incorrect data.

"With the proposed expansion of the workforce at Alderley Park from 2000 to 8000, and the building of 275 houses, it would actually be reasonable to expect an increase in the provision of sporting facilities, just to maintain or enhance the access for the individuals who use these facilities. If the developers had consulted with the Squash Section, they would have heard many ideas around flexible use of space and recruitment of new players to ensure continuation of what is a well-loved and thriving club."

The plans can be viewed on the Cheshire East Council website by searching for planning reference 17/5334M. The last date for submitting comments is December 14th and a decision is expected by 31st January 2018.