Town Council to increase use of handyman service 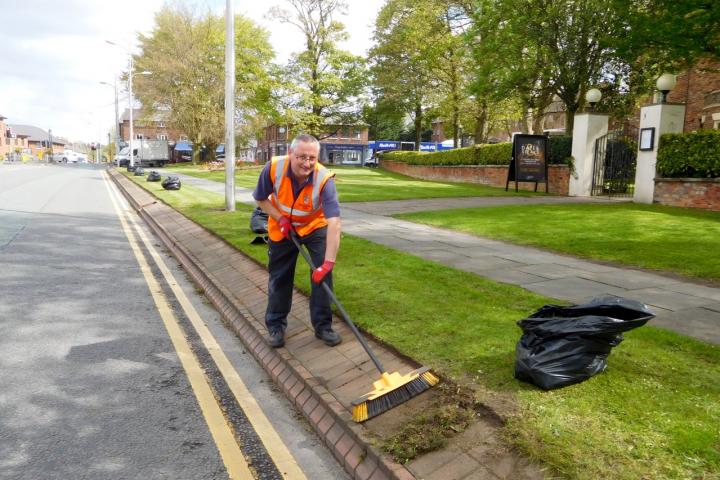 Wilmslow Town Council has decided to increase the number of days which the handyman they employ works.

The Council started trialling the services of a handyman early in the year to enable them to be more proactive in clearing up problems in the town - such as litter picking, repairing street furniture, cleaning pavements, removing graffiti and picking up leaves.

Initially they agreed to take Paul Redwood on for one day a fortnight on a trial basis until the end of April, then - because it was working well - they increased the arrangement to one day a week over the summer months.

At the Town Council meeting on Monday, 20th November, councillors voted unanimiously to increase the level of service to one day a week throughout the year, rather than one day a week during the summer months and once every fortnight during the winter months.

Town Clerk Matthew Jackson said "When we set it up we expected there to be more work in the summer than there is in the winter but what's actually happening now is he is backing up a lot of jobs because he is actually only working two days a month."

Councillor Frank McCarthy said "Initially we weren't too sure about how this was going to work out but as we know this has been one of the great success stories of the Council and the impact it has had has been quite out of the kilter with the amount that has gone into it. It has been one of those good things.

"When we started it, we said we would try it out to see how it went. Now we know how it is going and we've heard this is the time of year when things are building up, obviously it makes a lot of sense to actually make sure the handyman is there and can carry on with the jobs. They're only little jobs but they are important little jobs that people notice and can make a big difference to them."

Councillor Viveene Brooks commented "I think it's a good idea as he has done lots of good work so far and I am sure there will be a lot more."

This means that Mr Redwood will work an extra 13 days at a rate of £120 a day so the additional cost is £1560 and the total cost for a year, if the Town Council decides to continue with this arrangement, will be £6240.

The Council agreed to review the service in six months time.

Maureen Marner
£120 per day?
The way the pavements are in the Autumn, could do with several handymen. The leaves are very dangerous for the elderly and no doubt anyone who has to struggle with pushchairs and mobility scooters etc. .

Sue Lewis
Please would someone tell the High School kids to limit their littering to the one day a week that the handyman is available to pick it up! I recently stopped to thank a volunteer who was picking up litter on Parkway, for a job which should be done by the council in the first place!

For more information about Ansa go to http://bitterly/2zXrSPv

You state that, "I recently stopped to thank a volunteer who was picking up litter on Parkway". I suspect that this person was a volunteer for Wilmslow Clean Team.

For more information about Wilmslow Clean Team go to http://wilmslowcleanteam.org.uk

As a member of Wilmslow Clean Team I can confirm that we are supported both financially and practically by both Wilmslow Town Council and Ansa.

It isn't only school children who drop litter. My personal opinion is that more litter is dropped by adults than children. Some of the most common litter items we pick up are cigaret buts, cigaret packaging and beer bottles.

A retailer on Grove Street recently told me that they had witnessed three adults being issued with fixed penalty fines by Cheshire East Civil Enforcement officers. This was for dropping litter on the street. It is a civil offense to drop litter (which includes cigaret buts) and it is the responsibility of Cheshire East Council to enforce this in Cheshire East.

In my opinion, littering seems to have become a normal part of life and socially acceptable to some, if not all parts of our community. My question to you and all other readers would be; Do you agree with my opinion, and what do you think has caused this?

Wilmslow Clean Team has recently celebrated it’s 4th birthday and another news article about our recent activities should be appearing on this excellent site in the next few weeks.

Oliver Romain
Look at the picture. Who would be responsible if the chap fell of the slope into the path of a bus? Has he or WTC conducted a risk assessment? At the very least a properly conducted risk assessment would require traffic cones and signage to give him a safe buffer zone to work in. Roadworkers have one of the most dangerous jobs in the UK , they deserve protection.
It’s all a bit amateur, including the naming of the job as ‘handyman’ thereby excluding women from applying. Am I expecting too much when I expect WTC to operate within the law and keep its workers safe?

Julie Green
Instead of fining litter droppers and owners of fouling dogs, make them spend a few days cleaning it up!

Mark Goldsmith
@Oliver Romain: As you have so many great ideas of how to run local councils, have you ever thought of standing for election?

Oh, wait a minute....you have. Several times. And got very little support from Wilmslow voters on every occasion for your views.

As for your latest complaint regarding a full Risk Assessment for every task the "Handy Person" may ever undertake.

Well, lets just say its no surprise you got so few votes...

Pete Taylor
Sounds like a great idea to me; he's made a real difference.

It seems like only a few years ago that there was a full-time Council employee, in an orange suit, who wheeled his hand cart around sweeping up and picking up litter. I suppose that the money for that disappeared as part of George's austerity hit on Council funding?

Oliver Romain
Mark it’s not about me it’s about safety and equality. It’s typical for those who report safety concerns to be attacked. What you should be doing is asking whether WTC is acting lawfully in this context. Highway work is one of the most dangerous jobs and those workers are entitled to protection. The laws are there for a reason. Perhaps some training might be in order?
Very unprofessional to go on personal attacks and what you say is completely untrue, democracy only works where elected officials are held to account and obey the laws that governments were elected to make.
Do you think WTC is exempt from the law? That it’s okay for councillors to attend meetings and vote for tens of thousands of pounds worth of funding for own projects, to put lives of their employees at risk and women from applying for ‘men’s’ jobs? All of these things are illegal, the question is, what are you going to do about it?

Dave Cash
#Oliver, when did you last attend a Town Council, Finance or any Committee meeting as a member of the Public, to ask a question?