Use it or lose it! Bus company stresses new 378 service will run 'for trial period only' 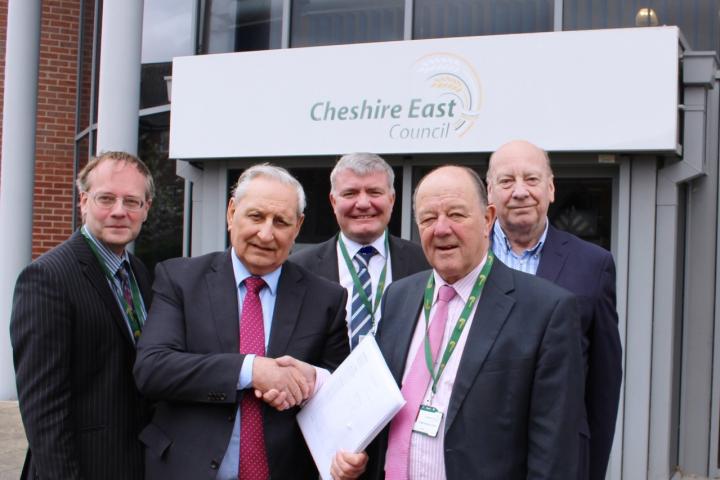 As reported earlier this week on wilmslow.co.uk, a new bus service running between Wilmslow and the Handforth Dean retail park is launching later this month.

The commercial service will launch on Monday, 24th April, and will operate from Wilmslow's Bank Square, through Lacey Green and Handforth from Monday to Friday only.

The new service will be operated by D & G Bus, will run approximately hourly from 8.14am until 5.57pm and will carry the same route number of 378 as the previous service operated by Stagecoach.

It is the first service to run directly to and from the retail park and Wilmslow.

Cheshire East Council Deputy Leader David Brown said: "I would urge our residents to take advantage of this service as it is vital that it continues, and provides a lifeline for a large number of people who do not have access to a car, who may feel isolated living alone or who need a regular bus service for local schools.

"Buses are also an excellent form of green transport and we would like to urge car users to think about switching to this and other services if it is feasible for them to do so.

"We are conscious of the widespread concern expressed over the withdrawal of the previous service but it must be emphasised that the council cannot interfere with the commercial decisions of private operators.

"Reports that the previous service was withdrawn because of a cost-saving measure by this council, were completely untrue.

"I would like to thank Handforth and Wilmslow town councils for the hard work they have put in to get this service introduced, even though it is only on a trial basis."

Chris Almond, bus network manager for D & G Bus, said: "We are going to run an entirely separate service called the 378 because that's the number residents recognise and know.

"The D & G service is a commercial route and will provide a link for many elderly people to use their usual community facilities and also a new direct link between the shopping complex at Handforth Dean and Wilmslow town centre.

"But it must be stressed that this will run for a trial period only, although we hope that there will be sufficient patronage for it to continue."

The timetable can be seen at Handforth and Wilmslow libraries or online.

The Stagecoach 378 service will no longer operate in Cheshire East from April 23rd but will terminate at Grove Lane on the Stockport border.

A spokesperson for Stagecoach Manchester said: "Falling passenger numbers on the 378 service means it has become no longer sustainable for us to continue to run this service on the section of the route between Grove Lane, Stockport and Wilmslow. We apologise to our customers who are affected by this change."

The Stagecoach 378 service was last part-subsidised by Cheshire East Council in 2012 for the evening service only. The decision to stop subsidising it, at a cost of £23,156 per annum, was taken by the Cabinet in October 2012. At the time they approved a proposal to reduce or withdraw funding subsidies for bus services supported by Cheshire East Council, resulting in a saving of £750,000 per annum.

Alan Brough
Perverse! The people that really need, and will use the service, will be pensioners who don't have the luxury of cars, but have free bus passes.

Work hard all your life and pay your taxes and watch the few privileges available to pensioners be eaten away by incompetent politicians!

Martin Watkins
@Alan Brough. The "incompetent politicians" you refer to are not eating away the free privileges from pensioners. Free bus passes give pensioners a ride at no cost to them but the cost is billed to the local authority, in this case Cheshire East. The number of pensioners traveling this route by comparison to the population of both Wilmslow and Handforth is extremely small and cannot justify a commercial bus operation. That over 3700 residents of our towns signed a petition to maintain the 378 service shows that this is well understood because to save this service requires "able bodied" citizens to use it as well to justify the service. Use it or lose it is not aimed at pensioners: it is aimed at all of us.

Pete Taylor
When was the last time these silk-tie politicians paid to travel on a bus (Martin, I notice that you are improperly dressed)?

Any comment from Silent Don Stockton on this, or any other subject, since he was elected?

Richard Burgess
It's no wonder that stagecoach find it costs to much to run this service when they send a dirty great double decker bus in the time after the rush hour,
Why not put a single decker on this service when not meny people us it,which would be a lot cheaper.

Martin Watkins
@ Pete Taylor. I guess you use distracting tactics. Suggesting how one is dressed as a prerequisite for travel on a bus is perhaps a tactic to avoid your own personal commitment to support this new service. Will you use it or not - yes or no?

You say that free bus passes give pensioners a ride at no cost to them?

Do you mean at "no cost" other than their working lifetime's tax and NI contibutions? The same contributions that The State assured them would provide for them in their old age?

In any private run company, could you imagine paying for something and not getting it? That company would (rightly) be forced into insolvency. Yet in the Public sector providing smoke and mirror "services" is de rigueur.

Please don't insult us by telling us that a service that we have paid handsomely for, to provide transport for our retired, elderly citizens, now requires us to pay more.

Maybe you could get back some of the Lyme Green Money, or some of the money paid out to Mike Suarez or Michael Jones (whilst their misdemeanours are being investigated) or perhaps you could claw back some of the cash being paid out to the CE Police & Crime Commissioner....anything, but just let our pensioners get on a bus and do their effing shopping!

Dave Cash
AIUI, Senior's bus pass journey's will be paid for by CEC, from the subsidy. You have to show your bus pass, state your destination and are given a 'free' ticket for the journey, as per other bus pass journey's, so it is a case of 'use it or lose it' for all prospective passengers.
No commercial company can run a Service at a loss for very long, but no one has yet indicated how long this probationary period may be, hopefully not shorter than12 months from start of Service. All buses/cars create pollution, but at least D&G operate reduced size buses on some services (eg 88 route) and pure plug-in electric buses may be introduced, when current stock needs replacing.

Keith Chapman
Wilmslow Town Council agreed at its last Meeting that David Pincome and Martin Watkins would support the petition to save the 378 bus service run by Stagecoach. This they have done. Since then the D and G service has been announced. Wilmslow Town Council does not have the resources to offer a subsidy for the original service. Martin has pointed out that Cheshire East continue to subsidise all pensioner bus passes, as each journey made by a pensioner with a pass is billed to Cheshire East. What has been withdrawn on commercial grounds is a particular route. If Cheshire East subsidised the Stagecoach 378 route it would be paying twice for each pensioner. The important thing now is that the D and G trial service is used, or in a few months time we will be bemoaning its withdrawal.