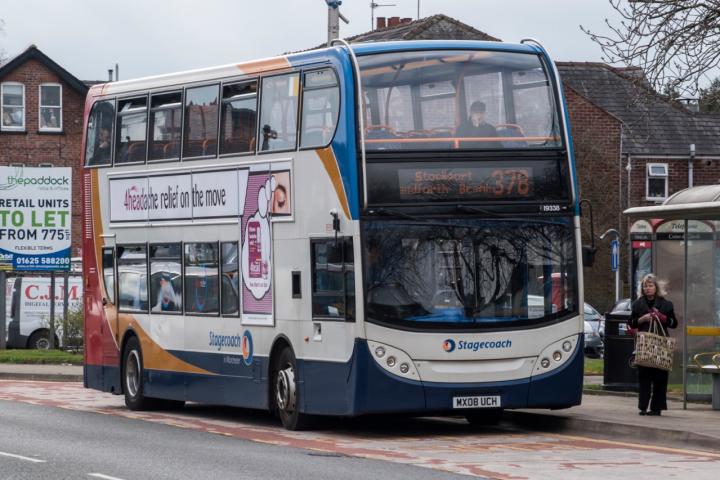 Wilmslow and Handforth residents are getting a new bus service later this month to partially replace the current 378 service.

As reported on wilmslow.co.uk last month, the Stagecoach 378 service will no longer operate in Cheshire East from April 23rd but will terminate at Grove Lane on the Stockport border, instead of travelling on to stop at Ollerton Road and The Green in Handforth before proceeding to Benson Walk, Holly Bank Road, Lacey Green and Bank Square. Thus leaving Spath Lane and Lacey Green residents without a bus service.

However, D&G Bus, which operates services in Cheshire, Staffordshire and Stoke-on-Trent, has decided to launch a new commercial service which will travel from Wilmslow Station to Bank Square, Lacey Green and up Manchester Road to Handforth and Spath Lane.

Unlike the current Stagecoach service, the new D&G 378 will not cover the Colshaw Farm Estate, which is served by an Arriva service, or go to Stoockport instead it will continue onto Handforth Dean.

The new 378 service will launch on Sunday, 23rd April, and run roughly every hour Monday to Friday. The earliest bus will leave Spath Lane at 8.14am, with the last bus returning to Spath Lane 7.57pm.

Chris Almond, Bus Network Manager at D&G Bus, told wilmslow.co.uk "We see this as an interesting opportunity to expand our service as we've never really run services in this area before. We have a service from Wilmslow to Knutsford and Altrincham so this new service compliments the existing one."

Janet Taylor set up a petition to 'Keep the vital 378 bus route to Wilmslow' said "We would sincerely like to thank Handforth Parish Council and Wilmslow Town Council for their support in this matter and the D&G Bus Company for stepping in and ensuring the community still have this valuable service.

"Special thanks go to our wonderful community who helped us collect over 3500 signatures on the petition."

Click here to view the timetable for the new D&G 378 service.

Photo: The Stagecoach 378 which will terminate on the Stockport border from April 23rd. Credit Martin Vincent Photography.

Richard Burgess
This is good news as there's a bus every hour from Handforth dean to Stockport I think it's 57 minutes past the hour.
Thanks d&g.

DELETED ACCOUNT
This is a good initiative from a different company. A dedicated bus to Handforth Dean - especially if it goes through the Stanley Green estate would enable many people to get to work.

David Hoyle
Looking at the route I don't think it goes through Stanley Green.

DELETED ACCOUNT
David, the route is down as "Handforth Dean internal roads". If it is going up Manchester Road - presumably it will go the back way in to Handforth Dean and then round up to the top. This would take it through Stanley Green.

Jon Armstrong
That isn't what the route information says. It says that after leaving Spath Lane, it will go up Wilmslow Road, onto the A555 airport link road in the Woodford direction, turn off onto the A34 and then into "Handforth Dean internal roads", suggesting it will either go in the entrance at the Boots end (although I'd wonder if the tight turns and bridge make this unlikely) or in the main entrance by Marks and Spencer.

Richard Bullock
An interesting timetable clash. If you wanted to use the 312 service from Stockport to Handforth Dean, then onwards to Handforth or Wilmslow on the new 378, then the 378 on the proposed timetable leaves 2 minutes before the 312 is scheduled to arrive. Couldn't be scheduled any worse!

Bob Bracegirdle
As ever these days it is daytime only. Oh for the days of the North Western running until 11.15pm.

Russell Young
Looks lime one bus, one driver, no recovery time at Wilmslow and a gap in the afternoon for the drivers break, so could have reliability issues, we' ll see.
To get it round in an a hour, some time has been clawed back and Culshaw Farm appears to be the sacrifice.

At least it's something, so points to D&G for having a go.

Chris Wigley
This is good news.

It says a lot about how Handforth is seen by CE that it withdrew funding for the 378.
Handforth still has no direct public transport connection to the largest employer in the North West - Manchester airport, yet Wilmslow (and the small population of Styal) have an hourly bus service and Wilmslow has a train connection.

Martin Watkins
@ Chris Witley. Cheshire East did not withdraw funding. This route was and remains an unsubsidised route and the decision by Stagecoach was a purely commercial one.