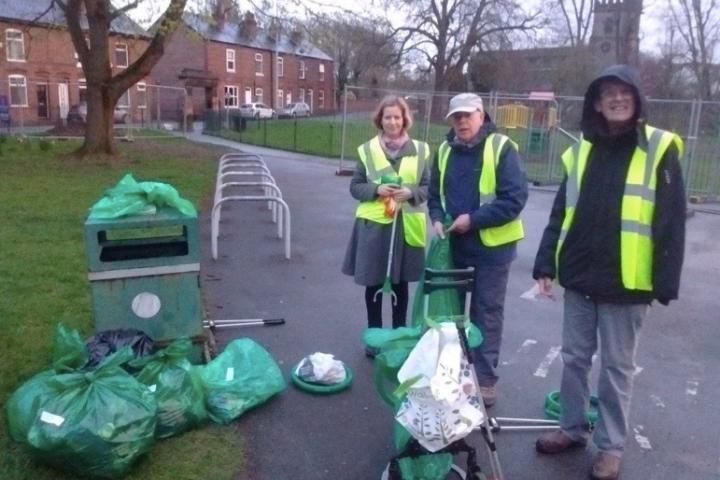 A team of volunteers took to the streets of Wilmslow last week in an impressive effort to spring clean the town.

Wilmslow Clean Team organised four litter picks during Wilmslow Spring Clean Week and collected at least 61 bags of litter along with some recyclables which had been dumped.

The campaign kicked off on Monday, 27th March, when ten volunteers met at Wilmslow Garden Centre and spent two hours focussing on Manchester Road, from the Blue Bell crossroads north to the boundary with Handforth, Dean Drive, Courtney Green, the Arthur Boon park, Stanneylands Road and the surrounding area.

A spokesperson for the group said "We have never covered some of this area before so there was a lot of very old, deep-seated litter, especially in the woodland around the park, and down the cul de sac road past the building used by the Army and Air Force cadets, towards the railway viaduct. We heard from a passer-by that someone is regularly fly-tipping drink cans down there."

They collected 24 bags of rubbish and three bags for recycling in their first pick of the week.

The following day one of the volunteers, Sheila, collected three bags and a wheel trim whilst clearing up Alderley Road and the surrounding streets between the bypass roundabout and the Kings Arms.

Eight volunteers met at the Parish Hall on the evening of Wednesday 29th March and collected 10 bags and some recyclables. They focussed on the surrounding area including The Carrs, Cliff Road, Styal Road and Bollin Hill.

On Friday, 31st March, seven volunteers gathered at the Unicorn Pub on Adlington Road. They proceeded to collect 12 bags of litter from the Dean Row area.

David Nelson
Words properly escape me! Who are these disgusting people who drop rubbish anywhere except in their own home or garden. The bypass in particular is a magnet for irresponsible dumping from moving vehicles. Their mothers, if any of them have one, would be furious.

Debra Conroy
Sadly the disgusting people are primarily children/teenagers who appear to have zero respect for the beautiful parks and open spaces. Meriton Road Park in Handforth is in a terrible state and this happens every time during school holidays. Why are teachers and parents failing to educate these young people on how to be a valued member of society and respect their surroundings.

Pete Taylor
What happened to the fellow who used to have a hand-cart and brush? He used to keep the town centre clean; I suppose "austerity" saw him off.
It's beyond me why thoughtless people drop rubbish.

Stuart Redgard
@Pete Taylor. Not quite sure who you mean. I've lived in Wilmslow 22 years and never seen the person you are referring to.

Nick Jones
I think the problem was he couldn't park his cart because of all the yellow lines, and as a worker in the town he was forced to park further and further out just to do his job.. but then he 'got done' for dropping litter !.. He's in Hale village now !.