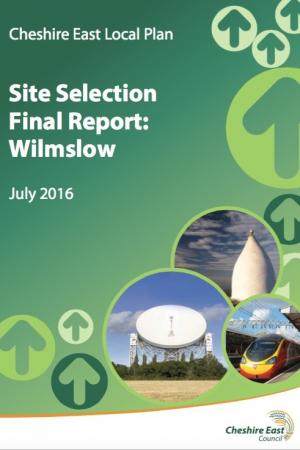 The Planning Inspector has backed Cheshire East's Local Plan for shaping future development following nearly three years of submissions and comments on the council's proposed strategic blueprint for the borough's development to 2030.

Most recently the Local Plan underwent a further six-week public consultation, which ended on October 20th.

Now Planning Inspector Stephen Pratt has sent a report to the Council which outlines the further work and further modifications that are needed to ensure that the Local Plan Strategy is sound.

In the report he says the locations and extent of development proposed in the plan seem 'appropriate, justified, effective, deliverable and soundly based'. He also said that issues relating to other strategic policies in the plan 'seem to be capable of resolution by modifications'.

Mr Pratt added that the council's further proposed changes to the Local Plan seem to address the changes 'necessary to ensure that the revised plan is sound and legally compliant'.

Councillor Rachel Bailey, leader of Cheshire East Council, said today: "This is really good news for the people of Cheshire East and I am pleased that the inspector has recognised the thoroughness of our evidence gathering and public engagement.

"We are confident that our Local Plan, which is comprehensive and robust, will give the people of Cheshire East its best protection against unplanned and unsustainable development.

"I am really pleased that the incredible hard work of our officers and members has paid off and the revised plan has been supported by the inspector, subject to some necessary modifications."

The focus of the recent round of public consultation was on the changes the council proposed to the plan it originally submitted to the Secretary of State in May 2014, in light of interim views by the planning inspector during examination. This included additional and amended strategic site allocations to accommodate the larger scale of growth now expected and planned for in the borough.

The Council received a total of 19,572 representations from 4,679 members of the public or groups during the most recent consultation. The Council had already previously received more than 40,000 responses to the original draft Local Plan during nine previous rounds of public consultation.

Councillor Ainsley Arnold, cabinet member for housing and planning, said: "The Local Plan is the council's most important tool for shaping development in Cheshire East up to 2030 and we now look forward to moving forward to its formal adoption in the spring.

"There has been a tremendous response from our residents and other stakeholders during the extensive 10 rounds of public consultations on our proposals and I'm sure it has allowed everyone to feel they had the opportunity to have their say.

"All told, we received a total of more than 60,000 responses in the various consultations to arrive at our draft Local Plan. This represents an unprecedented level of interest in a council consultation process.

"The council is very grateful for the careful handling of the public hearings by Inspector Stephen Pratt, who acknowledged in his closing remarks that 'this has been the most complex and challenging Local Plan I have ever examined' – having completed 20 or so examinations to date."

As is normal practice, the council will now be required to consult on the inspector's draft recommended main modifications to the plan before its final amendment and adoption by the council. This formal six-week consultation is expected to begin in January and will be carried out under the direction of the inspector.

Click here to view details of the Wilmslow and Handforth sites included in the Local Plan Strategy.

For more information about the Local Plan visit the Cheshire East Council consultation portal. If you scroll to the bottom of the page you can view the Inspector's Views on Further Modifications needed to the Local Plan Strategy (Proposed Changes).

DELETED ACCOUNT
Not sure why the Council is congratulating themselves. If you read the letter there is a list of what is needed and he is basically saying it can go out to another round of consultation without prejudice to his final conclusions.

Roger Bagguley
Whilst our Conservative Leaders are delighted it looks like we have a Plan and seem anxious to vote it through in Spring 2017 they have a lot to answer for. This they say will enable their council to control where and when developments will happen over the remainder of the Plan Period to 2030. Whilst some control will be arrested from developers it is naive to believe they will have full control and that the developers will fully cooperate in their drive to build 36,000 houses by 2030 with catch up in the early period being achieved to meet the demands of requiring a 5 year supply.

But why are we in this mess as 2017 approaches? Is this not the fault of our celebrating leaders? Should they have been preparing a new Plan prior to 2010 in order for it to be in place on time. I think so. Should they be hanging their heads in shame at the number of planning applications lost at appeal on land that is simply banked by the developers? I think so. Remember this green land is in excess of that allocated in this emerging Plan.

Mr Pratt has listened and taken on board the arguments of people like those of us Residents of Wilmslow (RoW) who challenged on lack of windfall in the calculations and on the fact housing figures presented to March 2016 are now well out of date, but very disappointingly he has chosen to use a very large over allocation figure to give flexibility rather than reduce the number of sites being allocated within the Green Belt. The Wilmslow sites remain unchanged so today with 576 units committed within the Plan and 531 already committed within the normal planning process, all on brown sites, we are already looking at a figure of 1107 houses for Wilmslow with a further 13 years to run. Historic windfall is 33 per year so another 429 units could see some 1500 houses built in Wilmslow by 2030. Now this is the same figure that appeared in the Wilmslow vision document at the beginning, the document torn up by Cheshire East. The 400 that replaced it was a victory for public opinion and a reason to celebrate. Halcyon days soon pass but not for our leaders who appear to have short memories. They are celebrating some sort of victory that will possibly result in 1500 houses being built on the Green Belt around Wilmslow of which 600 are calculated not to be required.

You will guess I am not celebrating today. You will guess that I and my fellow RoW colleagues and supporters have not finished yet. We will be there again in the forthcoming public consultation and still there when developers present their planning applications that will further blight the lives of those living in Wilmslow and its immediate surroundings. (Think too, SEMMMS and 14,000 houses just on the other side re. the Greater Manchester Plan) Hopefully we will still be there at the time of the next elections when we will seek to replace those who are celebrating today with Independent councillors who will truly represent the people.

Terry Roeves
The Inspector frequently uses the words 'seems to'. That's hardly a ringing endorsement. His letter doesn't give CEC a clear decision, either way. It's still work in progress.
Shocked to read Roger Bagguley's analysis of facts ignored by CEC. He is a good man, dealing fairly and dispassionately with information, carefully sourced and analysed.
It's a bad day for democracy.

DELETED ACCOUNT
I am unconvinced too why Cheshire East is celebrating. How many years has it taken them to get to this? How much money has been spent commissioning information from outside Companies when they should have been in a position to have the information to hand in the first place. How much money was spent employing a London QC to sit day by day in the last round of the Local Plan Hearing Sessions to guide them? Seems to me that whatever happens there are too many questions and issues left unanswered. All these will be paid for by us.