Lest we forget: September 1915 A doleful month 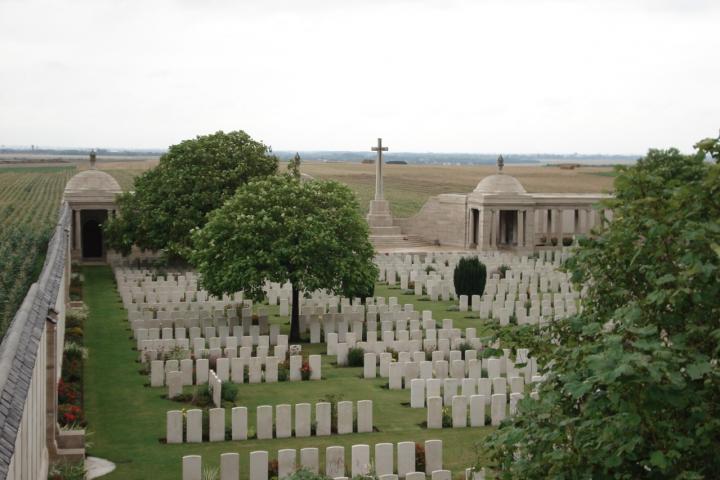 After the costly failure of the ill-fated attack in August at Suvla Bay, a war of attrition ensued in Gallipoli. Stalemate, shortages, confusion but unstinting bravery and fortitude marked our efforts.

The community lost another member of the 1st/7th Cheshires en route home from this awful theatre of war - Private Ernest Camm (No. 1874) aged 19. Heartbreakingly he got as far as the military hospital at Devonport before dying of wounds on 16th September. He is interred at Plymouth Western Mill cemetery. His Leicestershire born parents, William and Mary Ann lived first in Water Lane, then Newtown Park Road by 1911. Ernest, one of 8 children, worked as a butcher's errand boy alongside his father in premises in Church Street. He was a Territorial who obviously enlisted early. He is commemorated on the town memorial and inside the parish church.

A letter was written to Ernest's mother by the then Private Arthur Blake Scott (later commissioned for splendid reconnaissance work a few days after landing). Ernest's wounds "occurred on Tuesday, 10th August ... there was terrific fire going on ... your son got hit in the shoulder and I did all I could for him ... he was cheerful and brave. I found Sergeant-Major Lingard who helped me to put him on a stretcher ... I am greatly surprised to hear his wound turned out to be fatal. When I return to Wilmslow I hope to see you personally." Sadly Second Lieutenant Scott was killed in action at Gaza-el-Muntar, Palestine in March 1917. His parents were closely associated with the chapels at Dean Row and Styal.

There were problems for the Allies everywhere. Tsar Nicholas II superseded Grand Duke Nicholas as supreme commander of the Russian armies on 5th September in an attempt to rally his faltering troops. This was a mistake as he was now seen as personally associated with losses at the front - 1,400,000 killed or wounded in 1915 alone. Weakened also by desertions and the "Great Retreat", the Tsar crucially lost the resources of the now captured Polish economy.

German strategy altered. To assuage US opinion the Germans ceased U boat warfare in the Atlantic, concentrating instead on the Mediterranean. In the west they stood on the defensive. Dithering amongst the Allies and obvious signs of a forthcoming attack allowed the enemy to strengthen their lines (now 3 miles long) and develop their tactics of "Defence in Depth". Their front line was only manned weakly, but a heavily fortified second position was laid down well away from the range of the opposing artillery. Ground was readily conceded early on but it became obvious that a forward movement then of 3 miles to achieve "a breakthrough" was more than an individual soldier could achieve in a day or so. The German artillery was placed on the reverse slope of the heights – hard to locate. They often bombarded us as we assembled and then laid waste to "No Man's Land" as we advanced. Anyone who penetrated this and the front line was then met with murderous machine gun fire.

The French under Joffre had now the most men they would put into the field. On 25th September they mounted a converging attack in huge numbers at Vimy Ridge and Champagne determined to break the German salient. We were asked to play our part and attack on the same day between Loos and La Basse across a flat coalfield site littered with countless slag heaps and villages. Our strength was slowly growing and we now incorporated New Army battalions, poisonous gas and Lewis guns, but we were not ready for such a major offensive in terms manpower or munitions – especially in a battle not of our choosing. Much French and British blood was shed for little gain. The French had 143,000 casualties, the British 60,000 – the enemy lost half that number.

We attacked with 75,000 troops on a narrow 20 mile front. Objectives were imprecise. Barbed wire was 15 feet deep in front of the second line – well beyond our inadequate artillery to destroy. Cloud gas was released but some drifted back over own lines. Once through the front line attackers were quickly mown down by machine guns 1500 yards away. Not until the Somme did these weapons have such straightforward work to do. The effect was devastating. Men fell in 100's before the unbroken wire. The enemy, nauseated by the spectacle of the "corpse field" actually held fire as the British retreated – so great was the feeling of compassion. Over the next 3 weeks the Germans ceded a few thousand yards only. Their victory cost us 16,000 dead.

One such casualty was Rifleman Ernest Groves, a regular of the Kings Royal Rifle Corps 1st battalion (R/7559). Seeing action in all major battles to date on the Western Front, he was killed in action on 29th September. He was born in Over Peover in March 1891 to Sarah and Samuel (a labourer and later roadman) and subsequently had 3 sisters and 4 brothers. He is commemorated on Loos Memorial along with 20,604 others as well as on Wilmslow War memorial and in St Bartholomew's church.

By now many had been lost for very little gain and any hope of success in France and Belgium was postponed until 1916.

Raymond Acton
Ernest Camm in hospital asked a nurse to write to his parents a dictated letter in which he said he was 'only slightly wounded and doing well'. However, the nurse added 'I am sorry this is not the truth. His injuries are very great and we are very much afraid he will not recover......If it is possible to save him,we will'. Nurse Julia Crosby,Australian Hospital. (Alderley Edge and Wilmslow Advertiser,17 September 1915).