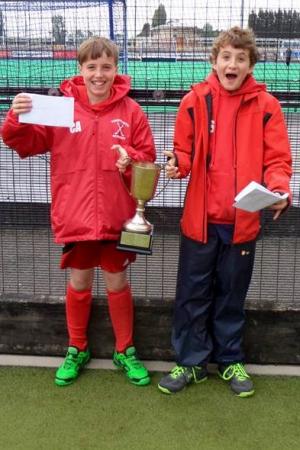 Following another outstanding season for their U13 boys' hockey team, two Wilmslow High School students have received national recognition for their talents.

Cameron Armstrong and Simon Swatland were both key members of the Wilmslow team that went on an unbeaten run to qualify for the North of England Finals and were selected for county trials and the JRPC programme (Junior Regional Performance Centre).

From this programme, both Cameron and Simon were selected to represent Tensworth, a county side made up of players from the North West of England. The culmination of a season's training and competitive fixtures with their club, school and county led to a national county tournament involving the English regions as well as teams from Wales, Scotland and Ireland.

Tensworth went on to finish the tournament as overall winners with Simon Swatland scoring the equaliser in the final and Cameron Armstrong scoring two penalty shuffles to take the cup.

Reflecting the quality of their performances, as the tournament drew to a close the two students were handed letters informing them of their selection to the UK Lions squad which is a national representative team. The two students were selected as part of a squad of 20 from 180 of the most promising players at this age group. A fantastic achievement and one that the two Wilmslow High School students can be enormously proud of.