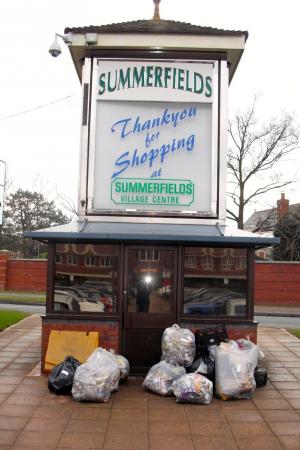 Volunteers from the Wilmslow Clean team were out last week on mission to clean up two areas of the town.

Three volunteers met at the Parish Hall on Wednesday 4th February. Two of whom collected litter in the surrounding area whilst the third person tidied up the car park and swept up some leaves. Six bags of litter were collected altogether.

Then on Saturday 7th February, six volunteers met at Summerfields where they tidied up the car park and surrounding roads.

Stuart Redgard, Operations & Membership Co-ordinator, said "Some of the hedgerows in the area, especially on Dean Row Road near Colshaw Drive and bordering the offices and Kids Unlimited nursery are in a disgusting state. The Clean Team did their best but the trees and plants make it almost impossible to get at some of the litter. We were surprised at how bad the litter problem was and collected 17 bags which is higher than average. We may well have to organise another litter pick in this area."

Wilmslow Clean Team have an arrangement with Cheshire East Council's Street Cleaning Services, operated by Ansa, that they leave the rubbish in specific locations or next to a CEC rubbish bin, and they then collect it the next working day.

The group of volunteers help keep Wilmslow tidy by organising litter picking events twice a month, which they have been doing this since December 2013.

They are in the early stages of organising a series of events in Wilmslow to coincide with National Spring Clean Week which will run from 16th to 23rd March, during which the group is planning additional litter picks, having a stall at the Artisan Market and looking to hold some film and talk evenings in local bars and pubs.

Wilmslow Clean Team is always on the lookout for new volunteers. They provide all the equipment, insurance and training. If you can spare some time to help you can get in touch via their website.

John Clegg
I'm one of the blimmin' do-gooders who continually pick up recyclable rubbish when out running - and occasionally the odd brightly-coloured bag of dog-poo if I'm not too far away from a handy bin.
Who thinks it's right to bag-up and then leave it on full view in a field or on a footpath?

Debra Conroy
Please tell me why volunteers who no doubt have full time jobs or are retired from a once full time job, are having to deal with this. Again I have written to our government, suggesting that the people who claim benefits due to unemployment carry out this task. I also blame the local schools for not instilling into the children the importance of not dropping litter. We are the worst country in the whole of Europe for littering and it is a disgrace.

Terry Roeves
This probłem does not exist in rural towns I visit in USA. Civic pride is significant and I do not see people of any age eating outside and littering the streets. Same goes for Germany.
Wilmslow Clean Team do a great job, but surely are being taken advantage of by CEC? Many of us do have great pride in the state of our town.
Our local CEC and WTC Cllrs need to insist on far more being done by the contractor. More litter bins will help and savage fines too. Show no mercy.

Jon Armstrong
Debra - I would say it's hardly the school's fault "for not instilling into the children the importance of not dropping litter"... isn't that rather more the job of the parents?

Colin Jones
I'm a member of Wilmslow Clean Team. We all acknowledge that Britain seems to be amongst the worst countries in Europe for litter which, as said, comes from a lack of civic pride. We coped with this for a long time because our local authorities did the cleaning up after our citizens threw the litter. But now, with local authorities trying not to increase Council Tax and having reduced funding from central Government, they are steadily reducing their non-statutory services. It is sad to see the effects but unless Borough/County councillors and national politicians think votes, in significant numbers, could be lost, nothing will change. It isn't just Cheshire East which is affected. The roadsides in Cheshire West & Chester's area and in Stockport MBC's area (just look at the verges of the A34 near John Lewis) are no longer being cleaned as often as previously.
Clean Team was established as an initiative suggested by Wilmslow TC. We know we can't do it all - but we care enough to try and make some difference. We would love to have some more volunteers, either joining in working in a small team or working individually, but under the Clean Team banner. But thank you anyway to those who go out to clean up after others!

Barry Lawlor
Thanks to you all for your efforts in keeping our community clean!

James MacDonald
It isn't just children, we must have all seen plenty of adults drop litter. No one has mentioned cigarette ends and packets dropped by many smokers. This is litter and they do it with impunity, expecting someone else to clear up the mess.