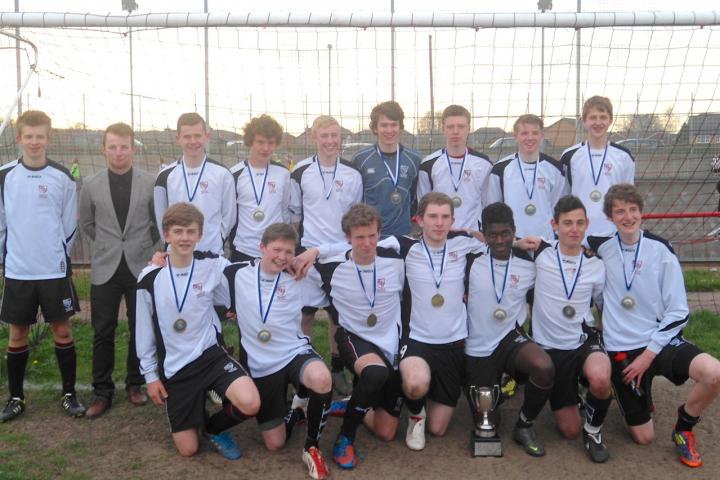 Early successes in the competition saw them record comfortable away wins over Middlewich, 5 – 2 and Eaton Bank, 8 – 0, before a convincing 10 – 0 home win over All Hallows in round 3. Tougher games were to follow though, starting with a close 3 – 2 away win over Sandbach in the Quarter Final. A home draw in the semi final saw them come up against a strong Great Sankey side. In a match played in difficult conditions, Wilmslow went into half time one nil up but knowing that they would be playing into a strong head wind in the second half. An early equaliser from Great Sankey saw Wilmslow put under tremendous pressure, but Wilmslow stuck to the cultured passing football that had served them so well in the early rounds of the competition and carved out the winner midway through the second half, holding on to win the game 2 – 1 and book themselves a place in the final.

The final, played at the neutral venue of Middlewich Football Club, saw Wilmslow drawn against Wade Deacon School. Wilmslow dominated the opening exchanges and went two nil up in the first twenty five minutes with goals from Jamie Frost and Pete Boyle. The team started the second half strongly and added a third, as Jamie Frost slotted the ball calmly into the back of the net past the advancing keeper. Wade Deacon then made a spirited fightback, forcing Jacob Turner, in the Wilsmlsow goal, into a number of magnificent saves. With twenty minutes to go, Wade Deacon grabbed a goal back to make it 3 – 1, but ultimately this was nothing more than consolation as Wilmslow clung on to win their second Cheshire Cup in three seasons.