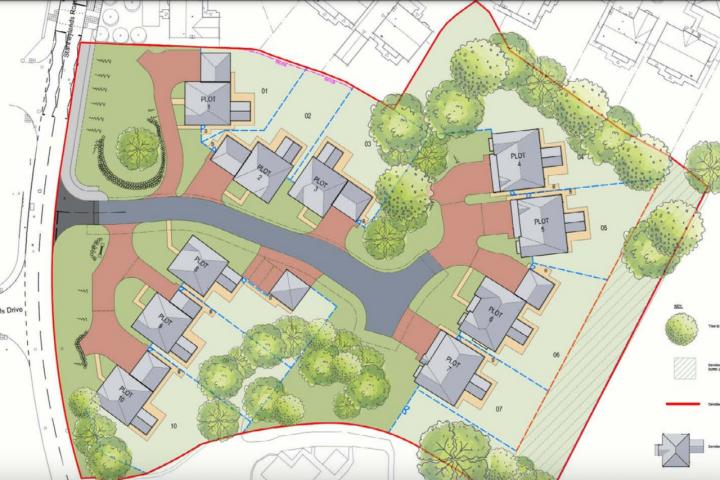 Plans to demolish the existing buildings and erect 10 dwellings at Little Stanneylands have been refused by the Northern Planning Committee.

The planning officer had recommended the application for approval at the meeting of the Northern Planning Committee on Wednesday, 23rd February, however the council's planning committee went against the advice of its officer and refused permission.

Committee members voted by 10 to 0, with two abstentions, against the scheme to replace five buildings with seven 4-bedroom detached homes and three 5-bedroom family homes.

Councillor David Jefferay said "The committee went against the officer's recommendation and refused the application because it was felt that the impact from the development on the heritage asset of little Stanneylands was too great. Personally, I was of the opinion that the adverse effect on nature and bio-diversity was also unacceptable."

The plans can be viewed on the Cheshire East Council website by searching for planning reference 20/4737M.

Roger Bagguley
Absolutely right Councillor David Jefferay. This application with officer approval reneges on the agreement struck with David Wilson Homes in 2019 to have this site created as a buffer zone between the heritage farmstead and their 174 houses to reduce the harm caused to the heritage asset. At the same time a wildlife corridor leading from the Dean Valley to this buffer assists in creating a wildlife haven. Thus, losing this buffer to any housing will increase the harm caused to the heritage asset and will destroy a rich habitat with further reduction in biodiversity.

This site offers a wonderful opportunity for any developer to demonstrate a commitment to conservation. A 17th Century farmstead set within a natural setting.

David Smith
Good and thanks to all those involved in making the case against. This is a perfect example of nibbling away at patches of land next to groups of houses whose paint hasn't yet dried and were recently plonked on land that used to have horses/cows/sheep running around.
If the recent parking on the pavements fiasco down Cliff Road next to the Carrs proved one thing - it was that those of us who live in this 'neck of the [gradually thinning] woods' WANT/NEED somewhere to go and sit on the grass with a few trees nearby and if there's also a stream or similar then that's even better, so how about it everyone - let's start 'building' open spaces where we can go on a nice day that might make us feel - despite being surrounded by expensive houses - that we are in the countryside?
PS: no offence to animal lovers but could we have most of it dog free please?

Simon Rodrigues
The owner sold off the land, now wants to claim the buildings have no real use. Well then he should of sold it with the land instead of being greedy. No doubt money will prevail and it will go to a higher court and somehow it will happen, like the nursing home on Manchester Road that we dont need nor, able to accommodate. But hey somehow they get the permission, just depends on how much money you have to throw at it.

Marcia McGrail
As the previous commentators have noted, money usually talks louder than any community but thankfully in this case, saner voices have prevailed.
David Wilson (Homes?) must have been hoping for shorter memories - what's that saying; if you want a pony, start with a kitten?
I wonder what the schemers would have done with all that money?
Well done to all involved in making this victory for common sense & giving a snub to greed.

John Westbury
Rather than leave the place empty, why not club together to buy it, then turn it into a pub. It could be called The Franny Lee Arms. That side of Wilmslow needs a pub, especially with all the new houses they've built there.