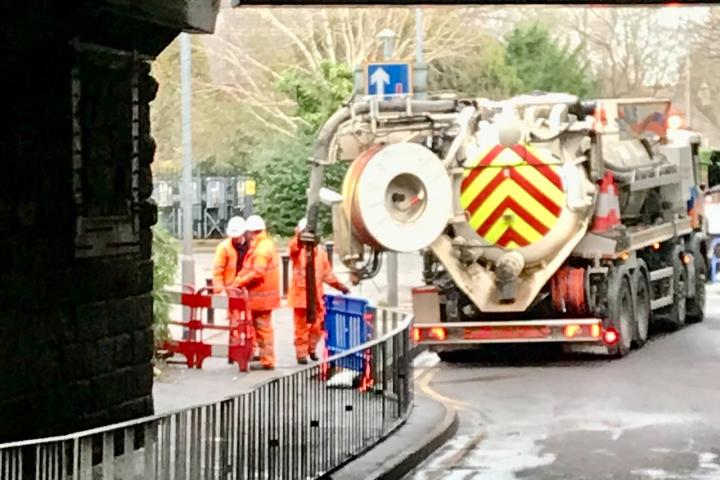 Station Road in Wilmslow has now reopened having been closed due to flooding once again.

Many local residents have contacted wilmslow.co.uk to express their frustration as the road has been closed on and off since Storm Barra brought severe winds and heavy rain on Wednesday 8th December.

Terry Roeves contacted wilmslow.co.uk about the flooded road beneath the railway bridge. He said "Apart from the inconvenience and extra distance getting into and through town, neighbours going shopping in wellingtons is a regular feature of daily life on this side of the tracks as are rail passengers with suitcases turning around or begging a lift.

"Authorities and United Utilities haven't seemingly got to grips with this at all. It is far too relaxed."

"However on asking if the problem was sorted the reply was disappointing. Apparently it is only a temporary measure while they try to find the actual cause."

A Cheshire East Council spokesperson said: "The highways drainage system has been affected by tree roots. Our engineers have been working to carry out repairs and the road has now been reopened."

David Pearce
Since Storm Barra a month ago this important thoroughfare in the town should have renamed Stationary Road.

Mark Goldsmith
The flooding was caused by roots growing and blocking a culvert behind Loaf, about 30m from the flooded area under the bridge.

Cheshire East Highways have now successfully cut these roots, jetted and emptied the system. The water is now draining away freely, so this should stop any new flooding.

A camera inspection of this whole section is being carried out to ensure there is no other damage or issues to the system. Therefore, it looks like this flooding problem is fixed but some remedial work may be necessary if the inspection uncovers any further problems.

Tony Haluradivth
Trees caused the destruction of the pumps on the bypass. I am all for tree planting but am also am hugely in favour of tree control which is now virtually non existent as the Eco cult regard any kind of tree control as high heresy. We used to dredge the brooks and ensure that are waterways were not blocked by trees which had fallen. Roots were kept under control by pollarding ...you rarely see it now . My wife has lived in the area since her birth in 1931 and maintenance and control of these things were better in the past even during the War years

Raymond James Wallace
I would like to appeal to Cheshire East Council to give me the same attention that has been shown on Station Road Railway Bridge, I too suffer from terrible flooding on Macclesfield Road, of which CCTV Cameras have been down and reported a collapsed drain also full of tree roots, this was identified approximately 4 years ago and nothing has been done even though they know where the blockage is. I know the exact spot as I witnessed the camera being withdrawn, I’m quite prepared to dig the hole myself given the right tools.