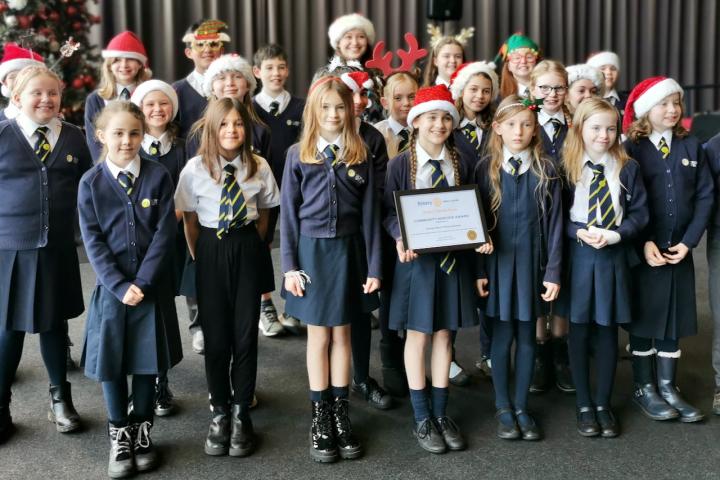 Pupils from both Gorsey Bank Primary School and St Benedict's Catholic Primary School received a community award on Sunday, 12th December, when they sang at the visitor park at Manchester Airport

The choirs have been spreading Christmas cheer this festive season, with tours of local landmarks and events.

They have been delighting audiences with their seasonal singing over the past few weeks, which culminated in a performance aboard Concorde this weekend and resulted in them being awarded for their services to the community.

Gorsey Bank choir's busy schedule began with them entertaining the crowds at the Wilmslow Christmas Lights Switch-On in November, before an appearance at the Styal Lights Switch-On a couple of weeks later.

Head of School, Joe Maguire said, "I am really proud of the children and the effort they have put into their rehearsals for these performances. It has been great to hear the lovely comments people have made about their singing, especially when music is such an important part of the curriculum we offer at Gorsey Bank."

The choir from St Benedict's performed six songs at the event organised by the Rotary Cheadle Royal and entertained the crowds watching. Prior to that they performed at the Handforth light switch-on.

"So that we could practise for Sunday, we performed in front of the whole school on Friday. We were nervous but everybody loved us and it gave us lots of confidence," said Scarlett.

The choir perform at 10am Mass on the 3rd Sunday of each month at St Benedict's Church.

Headteacher Hannah McGuire said,"it was a fantastic event and we thank them for inviting us along. The choir, led by Mrs Thomason and Mrs Burwood, sound beautiful and we think they're fabulous. The corridors at St Benedict's are often full of the sound of music and singing and the choir represent us very well. "