Decision due on plans for new residential developments at Alderley Park 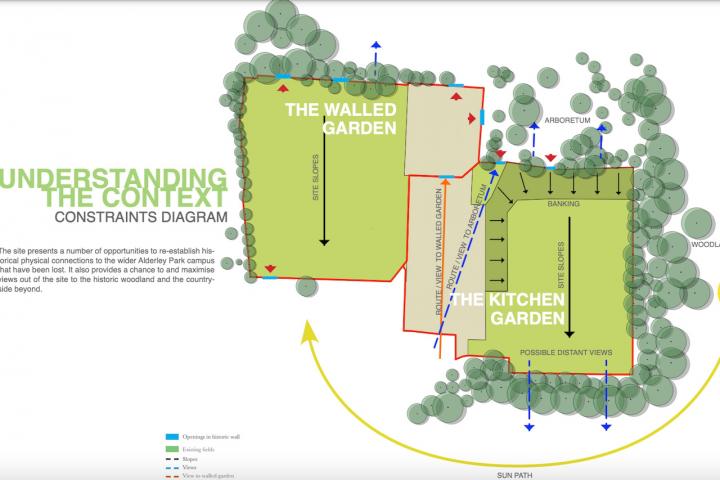 Plans to build houses on the two of the remaining undeveloped residential parcels of land in the southern campus area of Alderley Park will be considered by the Northern Planning Committee next week.

Jones Homes have applied for planning permission to build 17 units at the Walled Garden, which as the name implies was formerly a walled garden, but is now a grassed area. These properties are largely two storey – with three storey properties at the site entrance.

The second site, referred to as the Kitchen Garden lies to the east of the Walled Garden and was formerly a football pitch. The scheme includes 33 properties which are largely detached and a mix of two and three storey properties.

Alderley Park lies within the North Cheshire Green Belt, but is a Major Developed Site within the Green Belt and the proposals have been amended during the lifetime of the application.

Nether Alderley Parish Council objected to the plans stating "Whilst the Parish Council appreciate that 50 dwellings were allocated on this site within the Outline Planning Permission (15/5401M), it is a great disappointment to see the massing and density of the application causing overcrowding on the two small historic areas of Alderley Park.

"We appreciate that the applicant has addressed the number of 3 storey houses, however we still have serious objections to the inclusion of circa any 3 storey houses that we feel will dominate the Grade II Listed wall and impair the light to adjacent dwellings. We still consider them to be grand in design rather than 'cottage style' which we believe would be more appropriate within the Walled Garden area."

Adding "There remains little or no visitor parking available within the plan. We appreciate the latest layout has tried to address this but the Parish Council still feel the provision is lacking."

The planning officer has recommended the application for approval at the meeting of the Northern Planning Committee on Wednesday, 1st September.

Addressing 'perhaps the most significant issue' of design and heritage impact the officer stated "Whilst the Council's Design and Conservation Officer acknowledges that the proposals have improved significantly from the original scheme, on these important sites, particularly the Walled Garden, further improvements could have been made to form an exemplar scheme as can be found elsewhere at Alderley Park. However, it is considered the design and heritage impacts are acceptable in the context of the scheme as a whole."

The plans can be viewed on the Cheshire East Council planning portal by searching for planning reference 20/1970M.

David Smith
Well the whole thing is in my opinion a fudge of the planning system and making the process a laughing stock for all involved. Have a listen to the Radio4 programme ANY QUESTIONS broadcast on 25 June 2021 and available at the following link until 25 June 2022. The relevant housing/planning discussion begins at about 15mins 40secs into the programme.

A question is raised as to how young people can be helped to buy their first homes. [Don’t start me on that one!]
On the panel is Robert Jenrick - who is he? Well, he’s the [our, YOUR] Secretary of State for Housing, Communities and Local Government. He talks about housing, planning and where lies the decision in where WE want them to be built. Amongst what he says is the following:
“In accordance with a local plan created by local communities” (like our own Wilmslow Plan?) democratically elected councillors will choose where the public thinks new housing will go in the area [predominantly in brownfield sites.].
“We don’t want to see Greenfield sites being used [if that can be avoided] and certainly won’t be building on the greenbelt”.
Note here that he probably half put his foot in his mouth by saying he wants to avoid it but then certainly will not be doing it! Which is it then - a certainly not or a most likely possible?
“The members of the public [WE] will be electing local councillors, engaging in that planning making process…”
“We have a duty to hand over the built environment and the natural environment enhanced to the next generation…”

In Mr Jenrick’s defence I can only say he is a politician so what can we all expect? The problem is this sort of fobbing the public off with disingenuous talk seems to be a manner of treating a public that is easily copied by elected persons at various levels of government.

The programme presenter Chris Mason observed that Bob Seely MP[cons] Isle of Wight, recently said that ‘Communities should not be treated as the planning equivalent of ‘foie gras’ geese with ever more housing being shoved down them.

The pertinent comment here by the Housing Minister is that “…we certainly won’t be building on the greenbelt”
So just what sort of greenbelt is actually involved in this proposed application at Alderley Park? What sort of cop out is it for OUR greenbelt to have within it areas that are NOT actually greenbelt and so can be developed in ways that could go against the wishes of the local people - perhaps in accordance with a “local Plan’ as lauded by Mr Jenrick - and also perhaps against the wishes of our local democratically elected councillors as suggested by Mr Jenrick should also be the case?

What do you think?

Don't expect a response from the silent local Conservative Party-political "representatives" round here.

As regards to our local Green-Belt; it looks like another Toy-Town Lego estate will soon be constructed on land which the former Conservative CEC members voted out of Green Belt protection in order to force through their flawed Local Plan at any cost (second attempt!). What a splendid "Gateway" that will be to greet anyone entering Wilmslow from the South.

Yvonne Bentley
The plans as they stand were rejected

David Smith
Thanks Yvonne. Will there be another 'standing'?

Yvonne Bentley
Not certain on what grounds they were rejected. Unfortunately the outlining planning permission to build 50 houses was already granted in 2016. I think it is the design, density and layout that is an issue

Manuel Golding
I suspect The Rt Honorable Robert Jenrick MP, had his fingers, eyes & legs crossed when he utterred his worthless platitudes- they are worthless and mean nothing.As far as developers & planning officers are concerned they will simply ignor his words, push on with their,probably agreed beforehand, agenda. We have similar problems with the Royal London (Alderley Road, left) site where the Neighbourhood Plan maywell be ignored by the developer and Council Planners. It makes one want to ask, what is in it for them? Something wrong somewhere, but by whom & why?

Yvonne Bentley
Wow, that is the opposite of what we have been informed. We were told that it was 8 - 4 against the plan

David Smith
Anyway what I would also like to know is:
WHO IS THIS MYSTERIOUS, ANONYMOUS NORTHERN PLANNING OFFICER -
that always seems to get mentioned as the guy where the buck would appear to 'stop' in planning issues and who makes a decision that all too often goes against the wishes of our COUNCILLORS who in the democratically elected system that we live under, unlike other forms of democracy such as that run by the Taliban, are supposed to represent the people who live around here and not the already far too wealthy builders who just want to acquire more wealth by making it easier for people who don't live here to, well, er, come and live here!
Is there more than ONE planning officer? Why 'officer' anyway - makes him/her sound too responsible and grand? Like sitting there with gold braid and wearing a pith helmet or something.
Can we have some names please, who employs them, what are their qualifications and what sort of salary are they on?