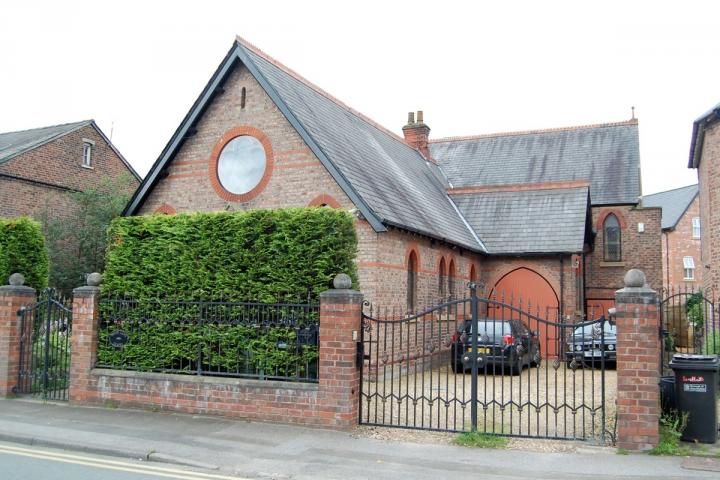 Plans to convert a former chapel at the bottom of Brook Lane into 4 apartments have been refused today.

The planning officer recommended that the Northern Planning Committee approve the plans at their meeting on Wednesday, 4th August. However, members narrowly voted against the proposal to sub-divide Brook Lane Chapel into four residential units, with the decision came down to the chairman's casting vote

The scheme included one 3 bedroom dwelling and others would have 2 bedrooms, with two parking spaces for each property and either a garden or balcony.

Four objections were received from local residents and Alderley Edge Parish Council objected to the plans on the grounds of significant over development; impractical parking proposal and concerns over highways safety entering and exiting the site.

Councillor Mike Dudley-Jones, spoke against the proposal at the meeting. He said "It is overdevelopment in the extreme, with no green amenity space and with a very dangerous car parking arrangement that is simply not practical even though, when seen on the screen, it can be made to look acceptable on paper. But that is before four sets of occupants are installed into the units! I feel bound to describe them like that because I cannot see anyone living any sort of normal life here if this application were allowed to go ahead.

"What a pity that a developer has to foist this impractical conversion on to the local community when a more sensible conversion of say two semi detached houses would have been welcomed. Nobody wants to stand in the way of bringing this building back to life where perhaps two families can live as part of this thriving local community in harmony with their neighbours. But perhaps there is too little profit in just two. Perhaps, packed in like sardines, makes more commercial sense?"

He added "A house that used to have 2 or 3 bedrooms will now have 9. A house that had space for 3-4 cars will now have 8, some parked in tandem, reversing out onto an increasingly busy road, to rearrange themselves, on a very dangerous bend; a house that had a small family could now have 16 occupants or more, and a house where most of these occupants will enjoy no green amenity space other than a balcony.

"Nowhere at all for visitors or deliveries to park and all of this on land that already floods each year not just with water but with sewage whenever heavy rain comes, and United Utilities have no solution to the problem. There are serious fundamental problems here that have not been addressed and will not be solved by adding a huge increase in occupants."

Speaking after the decision, Cllr Dudley-Jones told alderleyedge.com "I am delighted for the residents of Brook Lane who had expressed anxiety at the plans.

"The newly 'made' Alderley Edge Neighbourhood Plan Policy AE3 played a part in the decision."

Mike added "Nobody wants to stand in the way of re- developing this building but increasing it to 9 bedrooms with four family units with almost no green amenity space, and then adding 8 cars, tandem parked on a very dangerous bend confirmed the Parish Council's belief that this was overdevelopment."

Christopher Evans
The planning officer must have had rocks in his head to recommend approval.

Congratulations to the Northern Planning Committee for making a very good decision to reject this application. A brave Chairman. I wish the same decision had been made by the Chairman regarding 14/0007M concerning the Adlington Rd development.

Vince Chadwick
I just hope this doesn't mean it'll be demolished and replaced by something far less visually sympathetic to the area.

Alderley Edge Parish councillors and the CEC ward councillor should be encouraged to petition and argue for Protected Heritage Status for this building because of its architectural significance and historical importance to the area. I hope you agree.

If you live in Alderley, perhaps you know the right people to contact to get the ball rolling and make some noise in order to save this building from over development or demolition.

Lynne Prescott
I must admit that I rarely understand the decisions our CEC planning officers make - they seem to defy all the council guidelines to recommend developments that don't meet their own planning criteria and then refuse developments which from the outsiders point of view and perfectly acceptable! Love to have an interview with one?

Marcia McGrail
Is there a conflict of interests once again?
Often, when ludicrous applications nearly made it through, emboldened 'developers' (read greedy little scallys) will submit a minimally tweaked version; everyone will sagely think that at least it ain't half as bad as previously and nod it through; scally laughs all the way to the bank.
Reminds me of the old saying 'if you want a kitten, ask for a pony first'.