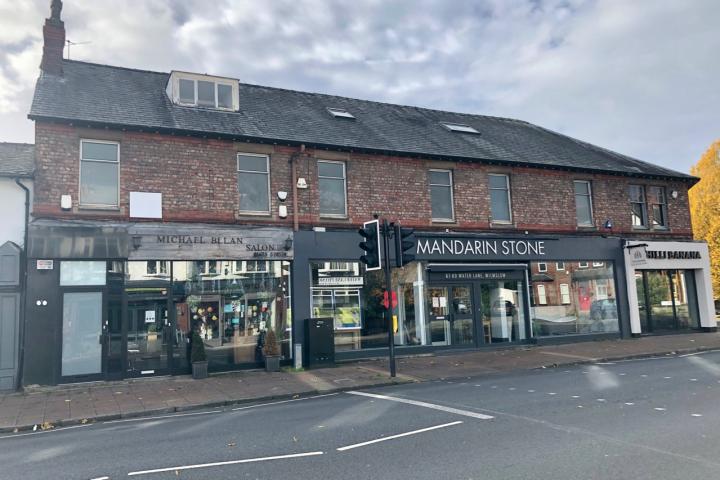 Plans to convert empty offices in Wilmslow town centre into ten apartments have been approved.

Wilmslow Estate Co. Ltd applied to change the use of first and second floor office space to residential at 61-69 Water Lane, which is located above the Mandarin Stone and MB Design retail units.

The project includes a second floor extension at the rear and dormers at front.

The residential development will consist of 8 one bed and 2 studios along with one car parking space and ten cycle spaces.

The scheme was revised to incorporate the design comments of the Principal Design and Conservation Officer.

Commenting on the design changes made the Planning Officer said "On balance, it is considered that a proportionate redevelopment is now proposed by the revised scheme and it considered the design solution is generally sympathetic to the overall character of area by way of the revised elevations. The style of the proposed development is now considered to comply with the grain in the close vicinity and it would not be detrimental to the street scene."

Concluding "It is acknowledged that the development would comply with regeneration objectives whilst bringing additional housing into the town centre that would assists in improving the vitality and viability of the Town Centre. In elevation terms, a more modest and sympathetic development is now proposed after productive discussions with officers. during the currency of the application. Thus, it is considered that the benefits of the revised scheme are now clear, and application is duly recommended for approval."

The plans can be viewed on the Cheshire East Council website by searching for planning reference 20/4734M.

Rick Andrews
Residential sounds good - but only one parking space for 10 premises makes me wonder if our planning officers can count! Yes, we all want to be green and ride bikes, but until the cycling and shopping infrastructure is provided, this will only add to the parking problems on Water Lane and nearby roads. Seems like East Cheshire is trying to help property owners who have lost commercial tenants but not seeing the bigger picture. I feel sorry for the nearby residents. We should question the abilities and allegiances of our planners. Anyone else feel we are at the top of a downward rollercoaster. ??

I understand your concerns re car parking spaces, but getting people back into living in the Town Centre is a key element in the Wilmslow Neighbourhood plan.

Applications that propose residential use within the Town Core, as defined on the Proposals Map, will be supported where they meet at least one of the following criteria:
• Provide new units through conversion of an existing office or commercial space
• Create living space above new and existing ground floor retail units
• Provide rental units suitable for first-time buyers and those wishing to downsize
• Within the Town Core the reuse and/or conversion of buildings is preferred to demolition and replacement, excluding the Key Town Core Sites

Edith C Richards
I live in the town centre and agree it is a fabulous place to live but this proposal makes my heart sink. Studio flats and one bed apartments are student accommodation, not desirable homes for down sizers or first time buyers - especially when the ten apartments share 1 car parking space! Where will the amazon and supermarket delivery drivers even park? This will make a busy junction more congested and less safe.

Stuart included the line from the Wilmslow Neighbourhood plan - "Provide rental units suitable for first-time buyers and those wishing to downsize". I supported the plan but can't understand this statement? What is a rental unit for a first time buyer? These proposed flats will be only saleable to the buy to let market and probably end up adding to the number of Air BnB options that are increasingly preventing first time buyers and down sizers from buying in the town centre, while reducing community cohesion. This is an excellent site to build some flats - but why build ones that no one will want to live in permanently? The planning committee only seem to have considered the appearance of the development from the street?

Why is it an excellent site to build some flats? That would mean demolishing the existing building which is contrary to the WNP!

Jon Armstrong
For the first 5 years I lived in Wilmslow, I rented a one-bedroom flat. I had no car so I didn't need parking.

People don't leave school or university and immediately have a partner, 2.4 children, a couple of cars and the money to buy a family home with gardens... everyone has to start somewhere and why not here?

The delivery drivers will park in exactly the same places they do when delivering to the business that are there now.

Edith C Richards
Stuart Redgard - by build I didn't envision demolishing the existing building but to install larger flats than the 10 currently being crammed into the space. My point was to say I live very close to this site and am not opposed to all development, just wish they didn't need to cram so many flats into the space. I am talking about the quality of the development not the pedantic details of whether a planning officer or planning committee passed them.
Jon Armstrong - If these were supported living apartments I would understand building single occupancy accommodation. I don't see a market for properties for single people who will never have friends to stay (or visit) and will be too small the instant they meet a partner. And the lack of parking will be an issue because the article states the offices are currently empty and there is already a congestion issue with parking for delivery drivers and customers for nearby existing business.

Jon Armstrong
Edith - perhaps you grew up wealthy but many young single people just starting out can't afford to spend hundreds of pounds more every month on extra bedrooms for the odd weekend that a friend visits. Almost 8 million people live alone in the UK...there is definitely a market for it.