Average speed cameras proposed for section of A34 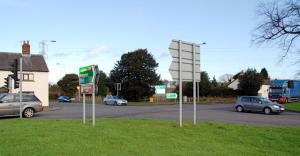 Average speed cameras could be installed on the A34 Congleton Road which has been identified as one of four roads across Cheshire to receive a cash injection from the police to make the road safer and reduce speed.

Part of the 'A' road between Monks Heath and Pexhill Road has been put forward by Cheshire East Council to have the cameras installed after an assessment, which included looking at speeding and collision data and concerns raised by local residents.

Cheshire Police will now work with the council to produce detailed plans for an average speed scheme, subject to a feasibility study and site survey.

Cheshire's police and crime commissioner David Keane said: "Thanks to the hard work and dedication of Cheshire Police and local authorities to make our roads safer, the number of people killed or seriously injured on Cheshire's roads has reduced by more than a third (38 per cent) over the last five years.

"However, one death on our roads is too many and I am committed to doing everything I can to tackle the five main causes of deaths and serious injuries on our roads, which includes speeding.

"This is strong evidence that investing in road safety saves lives. I see the installation of these cameras on the A34 and three other Cheshire roads as the start of a journey to deliver my vision for an 'average speed Cheshire'.

"This activity will send a clear message that dangerous, and potentially fatal, driving will not be tolerated in Cheshire."

A Cheshire East Council spokesperson said: "Road safety remains a high priority for the council and we will continue to work with our Cheshire Road Safety Group partners to develop initiatives such as this that target a reduction in the numbers of road traffic collisions on our local roads."

"I am confident that the installation of the new cameras will deter motorists from speeding which, we know, can be a significant contributory factor to the number of collisions that occur on our roads.

"Improving road safety is a priority for Cheshire Constabulary and we are confident that the installation of average speed cameras will help to make our roads safer and, ultimately, save lives."

Howard Piltz
Have I missed something ? Or was there no mention of the Alderley Edge bye-pass ? Surely be of the country’s biggest killers.

Manuel Golding
I don't have a issue with Average Speed Cameras on that section of the A34, especially if it reduces all accidents. However, I do have concerns with the EVERY WEEK-END the serious pollution on and around the Alderley Edge & Wilmslow A34 by-passes. The pollution is caused by childish boy racers and their anti-social behavior; over revving of their toy's engines to create excessive noise (not necessarily by speeding) and their added excesses of pollutant gasses. Both damaging to the locals' health and well being Summer is on the way, the problems can only get worse.
I've written and spoken to the Mr David Keane, our Police & Crime Commissioner and to the Chief Constable.on behalf of Residents of Wilmslow (RoW) but neither of the adore mentioned has been in touch or taken steps to alleviate the weekly pollution problem.
As for excessive noise the police can stop vehicles to check their noise levels, re pollutant engine gasses. Maybe CEC's air pollution monitors could accompany police patrols and check stopped vehicles' for their pollution levels?
For those breaking the pollution levels should be required to have their vehicles rectified and to report back to either police-HQ or a local Cheshire Constabulary station with their report. Failure to adhere should necessitate a heavy fine.Surely it is not beyond the with of either the P & CC &/or the CC.
We are getting beyond the stage of turning away from pollution in all its forms. Now is the time to be seen to be caring for our community and acting.

Henry Mott
Dear Editor,
Do we know where the other average speed areas are proposed within Cheshire East?

Lisa Reeves
Here they are Henry

A41 in Chester, part of the road between Christleton and Waverton
A574 Warrington Road in Glazebury, Warrington
A533 Southern Expressway in Halton

Christopher Evans
Melrose Way, A34 section, is perfect for remote control speed and vehicle registration recognition cameras placed at the intel and the outlet of the southern bound carriageway and the intel and the outlet of the northern bound carriageway. This would generate income, reduce the risk of accidents and strongly discourage fly tipping on the run off slip roads that come off Melrose Way.

The sooner it is done the better and I am sure ANSA will agree.

For Highways, the installation of these cameras may even be self funding in the long run.

Mark Goldsmith
I can also confirm that since 2010, all money from speeding tickets goes straight to the Treasury. It is then treated it as general income for the government to spend how it wants.

Therefore, neither Cheshire East, Cheshire Constabulary nor Ansa get any direct payment from speeding fines.

Consequently, speed cameras do not raise any money at all for local authorities, so any new ones are only installed on road safety grounds.

ANSA have the unpleasant task of clearing away fly tipped debris that is deposited on Council owned land. I hope this clarifies my point.

Christopher Evans
Mark, Thank you for this information.

To my knowledge, since the opening of Melrose Way there has been at least one tragic fatal accident. I refer to the collision near the Brook Lane bridge. There maybe more accidents fatal or not that I do not know about, but somebody in authority will know the numbers.

Now there is money in the budget, what is needed are average speed monitoring cameras with driver and registration plate recognition positioned at both ends of Melrose Way.

On Wednesday 3rd February you commented on an article about the A34. In this you included a paragraph from a post by Craig Brown on AlderleyEdge.com as follows:

“I'm also aware at this time that the Police & Crime Commissioner is intending to make provision for the installation of average speed cameras at eight locations across the county of Cheshire and I will be pressing for the bypass to be considered as part of this.”

Please confirm if the number of cameras to be funded by the PCC is still eight as suggested by Craig, or if it has been reduced to the four announced in this article.

I note that the locations proposed equate to one in each of the four principal councils in cheshire.
i.e.
One in Cheshire East
One in Cheshire West & Chester
One in Halton
One in Warrington

It smacks of political correctness with regards to distribution of the funding, or is this just a coincidence. Do you know how these locations were selected?

Richard Bullock
@Christopher Evans:
Almost every A road in the county has had at least one fatal accident in the last 10 years. Most of them considerably more than one.

The money is spent by a joint committee of police, fire brigade and highways officers. They decide where the biggest road safety improvements can be made by reviewing the accident and speeding data. They do not decide because of council lobbying, nor political correctness though. Their impartiality ensures the money is only spent where it will do the most good.

Variable speed cameras cost around £100,000 per mile to install with the fines going directly to the Treasury. This means they are not cheap to introduce, nor do they fund themselves through penalty fines. Consequently, they are only installed on road safety grounds.

With regards to Melrose Way, the police say none of its fatal accidents were caused by speeding. Therefore, speed cameras would not stop similar accidents from re-occurring and other initiatives are required to make this road safer.

Laurie Atterbury
Sometimes I don't drive so that = 0 mph. Sometimes I drive at 60 mph , or less. So, my mean average is 30mph , or less, so quite happy with my personal average. Don't need any tech to tell me that thanks.

Gordon Hyslop
@Christopher Evans Surely speed cameras are installed to make a road safer so, how will they generate income at the same time?

You make a reasonable point ~ I agree Average Speed Check cameras with driver recognition software are most effective at controlling the flow & speed of traffic. There addition to Melrose Way would have numerous benefits, including improved road safety. But, if ASC cameras are installed on MW, I believe that some motorists will break the speed limit, get fined and with that generate income. This is a long term strategy.

David Smith
MANUEL GOLDING:
I completely agree. Please see my posting and suggestions at the link below in response to comments made by Craig Browne in his capacity as Deputy Leader of Cheshire East Council - which if anyone hasn't noticed includes Wilmslow!

LAURIE ATTERBURY:
Your comment about average speed cameras and your 0mph & 60mph analogy is rather irrelevant to what is being discussed.

SIMON RODRIGUES:
Would you please care to post your comment again and explain more accurately the point you are trying to make?

Laurie Atterbury
Sometimes I don't drive so that = 0 mph. Sometimes I drive at 60 mph , or less. So, my mean average is 30mph , or less, so quite happy with my personal average. Don't need any tech to tell me that thanks.

David Smith
LAURIE ATTERBURY:
Go and find a stretch of road with average speed cameras controlling at 40mph. Drive at a constant 60 mph between the two cameras resulting in being recorded at an average speed of 60mph - 20mph in excess of the requested legal limit of 40mph.
When you receive your summons, stand up in court to plead your innocence. Look the judge in the eye and admit an average speed of 60mph in the 40mph section. Then explain that because the evening before you were watching your favourite programmes on TV - ‘Blue Peter, ‘Sooty’, ‘Watch With Mother’ - and didn’t move off the sofa, your average speed was then 0mph. When combined with your 60mph average speed equates to an overall ‘average’ of 30mph. Therefore your 60mph average speed actually works out as a generous and sensibly-safe 10mph below the legal 40mph requested of all the other law-abiding motorists.
Then watch the expression of the judge who is probably thinking, “Guilty as hell and in all the years I‘ve been judging I’ve heard some crazy excuses but this one takes the biscuit”. Before looking up the maximum sentence he can give such a nutcase he’ll probably glance at your legal representative who with head in hands and trying to appear invisible will be wondering at the damage being done to their reputation as a credible lawyer.
Don’t bother to let us know where we can visit you in jail but enjoy the experience.