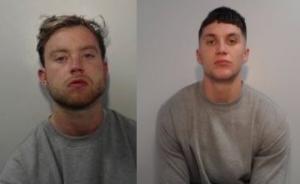 Two robbers from Wythenshawe who targeted the owners of high-value watches have been jailed.

Niall Whittaker, 27, and Jack Meek, 25, (18/04/1995) of Tipton Drive, Wythenshawe were sentenced to five and six years in prison respectively at Manchester Crown Court, Crown Square on Wednesday 23 December 2020 after pleading guilty two counts of robbery and one count of attempted robbery.

Driving a stolen blue BMW fitted with false number plates, the pair observed a man in his 80s while he was sat outside a café on Ashley Road, Hale at around 4.30pm on Wednesday 12th August.

When he got up to leave, Whittaker and Meek followed the man as he drove back to his home at an apartment block in Wilmslow.

When the man got out of his car Whittaker and Meek attempted to steal his watch - a gold Michael Kors watch that the pair had mistaken for a Rolex.

The man bravely fought them off before they fled, driving through a red light and causing a minor collision - investigations into which showed Whittaker at the wheel.

Later that day at around 6.45pm, the pair approached a man on Barrow Lane, Hale and demanded his watch - a gold Rolex valued at £9,500. They also stole around £4,300 of jewellery from the man's wife.

On Friday 14th December warrants were executed at Meek and Whittaker's homes. Meek was arrested and his mobile seized. He was released on bail due their being insufficient evidence to charge him.

Whittaker was not at his address and circulated as wanted.

Meek was also circulated as wanted after police gathered more evidence against him.

On Saturday 29th August 2020 Whittaker was detained by Cheshire Police after an off-duty GMP officer recognised him in a pub in Warrington.

Police later tracked Meek to a hotel in Handforth, Cheshire where he was arrested.

Inspector Matthew Gregory of GMP's Trafford District said: "Whittaker and Meek showed a total disregard for their victims, demonstrated by the utterly cowardly targeting of a man in his 80s.

"They deliberately sought-out people in possession of high-valued watches and were prepared to use physical violence in the commission of their crimes. Thankfully no one was seriously hurt.

"GMP takes this type of offending extremely seriously, and thanks to the hard work of the officers involved, they were able to link Meek and Whittaker to these crimes using a variety of evidence.

"These sentences demonstrate that such offending will not be tolerated, and I hope provide the local community with some reassurance now that these offenders are behind bars."