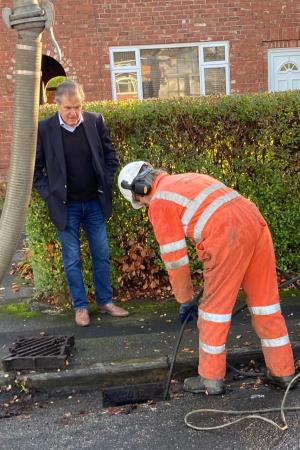 A Wilmslow councillor is keen to let residents know that "work is still going on to improve facilities in Wilmslow during these strange times".

Lindfield Estate North residents have had to put up with blocked drains for far too long which have caused flooding for days when it rains.

One resident described having to leap over huge puddles on her way to and from work as "just like the long jump".

However, the issue was resolved on Friday, 13th November, when the the mud and debris was finally removed from 13 drains after Residents of Wilmslow independent councillor Iain Macfarlane took up the issue with Cheshire East Highways.

Councillor Iain Macfarlane said "One resident described having to leap over huge puddles on her way to and from work as 'just like the long jump'.

"The problem-reporting system we have to use takes quite a while to get into action but the estate now has clean gutters and no more depressing lakes of water all over the place".

He added "If Wilmslow residents have any local problems they should contact their ward councillor through the Cheshire East website - were here to help you".

Wendy Falk
I've reported numerous blocked drains on Granville Road, due to building work detritous, leaves, mud, etc. but the council surveyed the gutters in question and, as it was not classed as a 'hazard', they said they would not be providing clear-out services at that time.
Even though most front gardens have been transformed into concrete driveways and more water is flowing onto the roads, drains are no longer a priority. It's just so short-sighted, though, as the edges of the roads deteriorate more rapidly as traffic drives through these massive puddles on the roads. Plus, when the water freezes it causes the tarmacadam to break down and before long there's an actual pot hole. Rant over - sorry, we get loads of 'lakes' on our road and one regularly drenches our front garden :-(

Thank you for pointing this out. We will get it added when the library reopens in December. In the meantime, contact details for all Wilmslow's Cheshire East councillors can be found at:
http://moderngov.cheshireeast.gov.uk/ecminutes/mgMemberIndex.aspx?bcr=1

While we are on the subject of contact details, I realise you are no longer a Conservative town councillor, but if you see Cllr Katre at your next virtual Conservative meeting, can you please ask him to put a working e-mail on his town council profile on http://www.wilmslow-tc.org.uk. His e-mail address has not been working for over a year now, so residents in Wilmslow West cannot reach him this way. I get 99% of my residents correspondence from email, so I an not sure how he can be properly representing them and why he hasn't ever noticed it isn't working. Perhaps they just come to me and Iain (their independent councillors) to get things done instead.

Anyway, I have repeatedly asked for this to be fixed but to no avail, so I hope you have better luck than me.

Mark Russell
Any chance of sorting the parking? Maybe then the council workers could access the grids to clear the drains?!

Iain Macfarlane
Hi Wendy, thanks for your comments.

I've just been walking along Granville Road to look at the drains and gutters.
The drains outside house numbers 1-17 seem fine, some have a few leaves at the bottom as you would expect at this time of year but any surface water should flow through them. The drains outside 2 -18 are similar.
The top two near to Moor Lane are blocked and I shall report them into Highways at Cheshire East for cleaning out in due course.