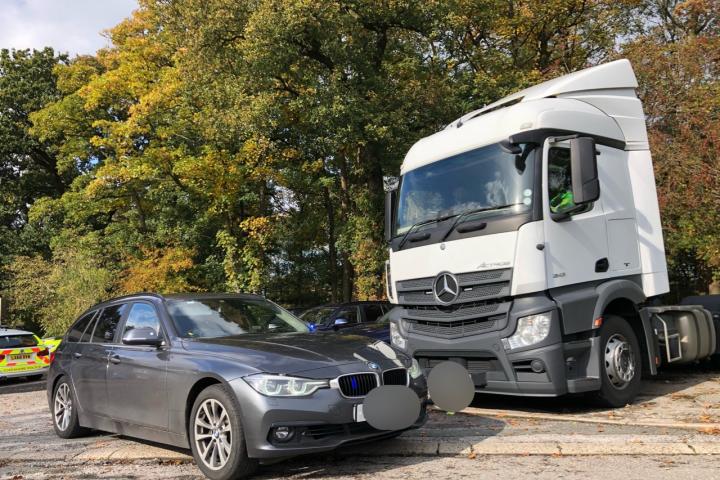 A roads policing operation saw over 70 Traffic Offence Reports issued to lorry drivers using motorways and main roads across the county in a week-long operation in a bid to make sure commercial hauliers were travelling safely on the local road network.

The operation ran from 10th to 16th October and saw officers use a Heavy Goods Vehicle to patrol key routes to enable them to identify any offences carried out by lorry drivers – particularly around the Fatal 5 – careless driving, speeding, driving while using a mobile phone, drink/drug driving, not wearing a seatbelt.

In total 74 Traffic Offence Reports were issued, 43 were for motorists who were not wearing seatbelts, 25 for drivers who were not in proper control of the vehicles and 13 for using their mobile phones whilst driving.

Inspector for the Constabulary's Roads and Crime Unit, Anton Sullivan, said: "Sadly, there are some drivers who think it's acceptable to break the law and believe that they can get away with driving without wearing their seatbelts or whist using their mobile phone or otherwise distracted from driving.

"This vehicle is a valuable tool as it allows officers to have an elevated view enabling them to see exactly what is going on inside the cab of a lorry and to identify any offences which wouldn't normally be seen from a patrol car.

Anton added "I hope that the operation acts as a deterrent to lorry drivers, promotes safer roads and reiterates the fact that nobody is above the law, literally.

"The operation may have concluded but officers will be continuing to use such vehicles to patrol the road network across the county."

David Smith
Well done. Good to know that someone is coming up with really good ideas that actually work.