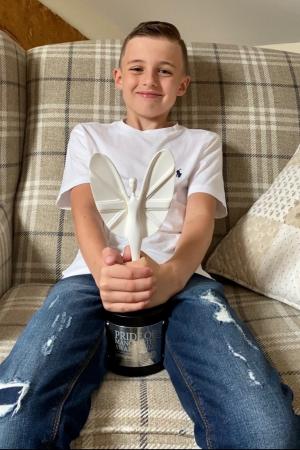 A prolific young fundraiser from Wilmslow has been awarded for his tremendous efforts.

Nine year old Joseph Hibbert, who has been fundraising for Royal Manchester Children's Hospital ever since he was three - despite never having been a patient there himself - has been crowned Young Fundraiser in the Pride of Manchester awards.

To date, Joseph has raised over £32,000 for Manchester Children's Hospital. This year he planned to do the Kinder Scout challenge  - a walk of around 16km in a rugged area of the Peak District - having signed up over 140 to accompany him, but unfortunately this has been postponed until next year due to coronavirus.

His mum Shelley said "It's wonderful but it was total unexpected. Joseph was lost for words (for once) it's always been about helping and encouraging others to be kind.

"Joseph is so pleased that so many people will see it and hopefully they will want to do something for charity as well."

She added "We are so proud of Joseph and the example he sets for other young people."

Jean Berman
Wow what an amazing young man. Would love to know his next fundraiser so I can donate to his amazing fundraising