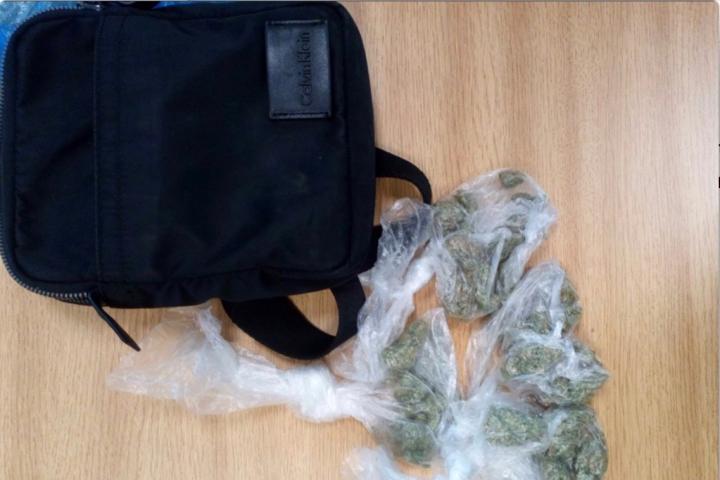 Police officers attended Total Fitness in Handforth this afternoon (Sunday, 5th April) after receiving reports that a group were playing football on the site.

A large group of males were reported to be playing football on the outside courts at the club, despite the Government telling people not to meet with friends or family, that they do not live with, during the lockdown.

A spokesperson for Handforth Police said "If the young man that left his bag, house keys and drugs behind wants to collect his keys they'll be waiting for him at Wilmslow Police station."

Having visited Stanley Hall Park about half an hour earlier, they tweeted "Perhaps the stay at home message is finally getting through, all empty at Stanley Hall Park in Handforth. Lets hope it stays that way and everyone follows government advice and helps support the NHS."

Speaking on the news today Health Secretary Matt Hancock warned that exercising outside could be banned if people continue to ignore the social distancing rules - meaning a minority would spoil it for everyone.

Vince Chadwick
Idiots! Absolute stupid and selfish idiots! Do they think they are immune? Do they not care that their anti social behavior is exactly what covid 19 needs? The virus doesn't give stuff about them, or you, or me. It just wants to jump to new hosts and spread, and these loons have helped it do just that. Without humans coming into close proximity with each other or ignoring hygiene rules it cannot spread. If it cannot spread it will die out.

It only takes a few selfish idiots to make the difference between this pandemic being contained, or it becoming unmanageable. A small but deeply stupid sector of our society could screw it up for all of us.

Do they think they know better than the medics and the scientists? Don't they care or are they just so stupid they don't know this? By behaving as they did they help the spread of the virus endangering ALL of us, not just them, and potentially increasing the load on an NHS which is almost maxed out.

This is to all those of you who’ve decided to go out for day trips in the sun this weekend.
Don’t you dare stand on your doorsteps and clap and cheer for us, the NHS on Thursday you hypocritical scumbags. When this is eventually over, don’t you dare pat yourselves on the back and say ‘we got through together’
YOU put NHS lives at risk, whilst we were trying so hard to help and protect you and yours
YOU put vulnerable people’s lives at risk
YOU probably caused people to die
YOU should be very very ashamed, but you won’t because
YOU are a group of selfish *******.

Paul O'Neill
The police should start dishing a few whacks of the truncheon at idiots like this. Hopefully, that will act as a deterrent.

Christian Hurstfield
NHS employees need to keep their perspective in check before insinuating "YOU probably caused people to die".

YOU do know that the virus was over here in Jan? So well over a month where everyone, including yourselves could have been "causing people to die" for [at that time] unknown respiratory reasons...

Also, what a waste of herb.

Simon Worthington
While I don’t condone the behaviour I do remember the build up of frustration and energy of constrained youth. I hope the lad who left his weed now has a nickname from his pals he will never forget!!!
The rant from the NHS worker on facebook (does anyone use it apart from shopping and posting sickly photos) needs deconstructing.
I have spent the last few weeks researching our current world wide problem.
The FACTS. It came from China, whether from the disgusting eating habits, a lab or 5G (far fetched but the hotspots of 5G roll out/testing in no particular order; Wuhan, London, New York, California, Qom, Madrid and Northern Italy. It uses similar technology to your microwave and we know what that is capable of doing). China has lied repeatedly and continuously and cannot be trusted – as if we didn’t know that already. The virus is contagious. It has a detrimental effect on those with pre existing health problems and especially the obese (now wondering why the USA is so badly affected?). The hug ins in Italy and New York (see Pelosi) organised where large populations of Chinese had just returned from China after Xmas appear to have caused speedy mass infection. It has a very low death rate in areas where anti malaria prophylactics are used, much to the annoyance of the foam flecked anti Trump mob. The WHO is not fit for purpose.

The rest is speculation. Our own government “advisor” Neil Ferguson of ICL who is on the public payroll and no doubt in line for a large pension at our expense first advised that 500,000 deaths were likely. After a solid debunking by an Oxford Professor he reduced that to 20,000. This is the man that the government relied on during the foot and mouth outbreak 8 years ago where he was comprehensively wrong and cost farmers £8 BILLION. He was also involved in the warnings during the Variant Cruitzfeldt-Jakob (“mad cow”) disease in around 2000 when he speculated that over 150,000 people would get it and die of it. So far total deaths in the UK are less than 200. He was removed from Oxford University and slid his way into another job and continues to spout nonsense.

Just as the irresponsible youths are being castigated, in the last day I have seen at least three women marching around smugly with their scarves over their mouths completely ignorant of the advice that a damp covering over the mouth/nose will absorb the virus more easily. The advice is clear that only a mask suitable for the purpose will have any benefit and it is more use on those already affected stopping them from releasing the virus into the air.
Testing. Pointless as one may test negative and already be infected when tested for infection. Antigen testing is only of any use at least four weeks after recovery from infection and that test is not yet reliable. See Schrodinger’s virus, a play on the cat, for more confusion.

Now onto “Our NHS”. They were warned in 2016 that they were totally unprepared for the present scenario and did nothing about it. The lack of equipment is mainly the fault of the useless hierarchy and purchasing mechanisms. The first warning (from Stamford University in February) was to NOT take serious cases to a normal hospital as it would then infect the hospital and have a detrimental effect on those there and ill with the various old age issues, see Eddie Large, full of immunosuppressant drugs. Italy has now admitted that was one of their mistakes. “Our NHS” also seems to be incapable of producing figures of how many have recovered since last figures of 135 on March 22nd.

I hope those who are capable will consider using this free time to write to their MP encourage them to initiate a root and branch overhaul of the NHS with particular attention to PHE and the number of non medical employees. Total spend of PHE £4.5 BILLION!! For those who don’t think that is necessary note that Bristol & Weston NHS Foundation Trust is currently (yes, now, and probably in The Guardian) advertising for a “Diversity and Inclusion Manager” at £50K pa.

I will not be standing outside my front door clapping like a seal and virtue signalling to my neighbours just what a good citizen I am nor will I be phoning plod if I see someone taking a breather on a bench. Reminiscent of Mutti’s Stasi!
I rather hoped that the NHS was there (with untold billions of tax payers’ cash - £160,000,000 this year) to save me not that I should stay inside, not work, and go skint, to “save our NHS”. The envy of the world!! Name one country that has copied it.

Vince Chadwick
Simon Worthington, I got as far as your belief that 5G might have something to do with the spread of C19 and read no further.

Only the deeply ignorant and society's sociopaths would even begin give that ludicrous notion houseroom. Unfortunately they do exist, and have been destroying 5G masts at a time when effective communication is more vital than ever.

Simon Worthington
Vince - obviously the words "far fetched" missed your eyes (good reason to stop reading!!!!!) and I remain on the fence with this. I will ignore the intended insult but suggest you check Switzerland's, Slovenia's, Australia's and others stance on this. I presume you are an expert on radiation effects on living tissue but you may wish to do some further research.
Check: RadiationHealthRisks.com observes that “1G, 2G, 3G and 4G use between 1 to 5 gigahertz frequency. 5G uses between 24 to 90 gigahertz frequency,” and then asserts that “Within the RF Radiation portion of the electromagnetic spectrum, the higher the frequency, the more dangerous it is to living organisms.”
Much more information from the "deeply ignorant" Eu researchers, doctors, scientists etc available.

Vince Chadwick
Simon Worthington, as it happens my brother is world expert on ionising (and non-ionising) radiation and chairs international conferences on the subject and is frequently called as an expert witness on such matters as the safety of cell phone base stations. However, that is irrelevant. Anyone who thinks Covid 19 can be propagated or in any way enhanced by 5G radiation has zero scientific knowledge.

Perhaps you also believe in chemtrails, that the Moon landings never happened, and that we inhabit a flat planet?

One conspiracy theorist to another: "You know that jet fuel doesn't burn hot enough to melt steel girders, so the World Trade Centre was obviously an inside job".

"Yeah but what about the chemtrail tanks on those aircraft. Who know what temperature that stuff burns at?".

"Wow, never thought of that!".

Have a nice Easter Simon, and do some proper research while you are locked down. It's an ideal opportunity!

Simon Worthington
How low Vince!! If you had read and comprehended my comments you would have noted that I didn't say I believed it but raised the issue that many, including various Governments are investigating the possibility that some harm may occur from the 5G masts . Keep up with all that facebook and the BEEB have to offer!!
I'm off for a game footy and a smoke with my pals before I die!!!!!!!!!

Helen Hayes
5G. Has nothing to do with this virus. Stop talking about it.