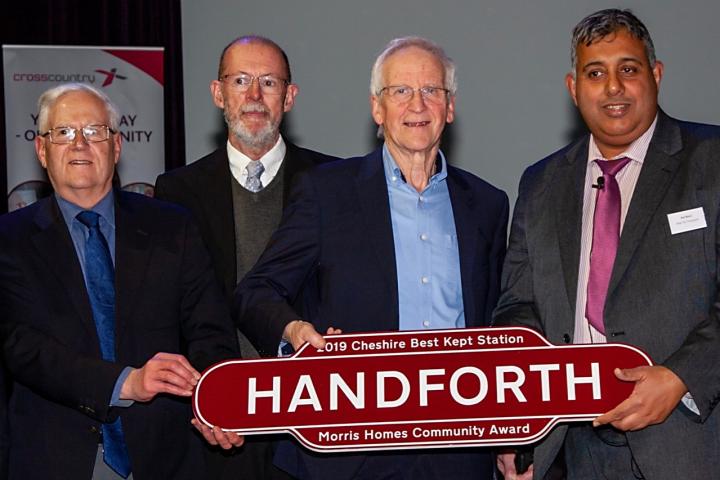 Handforth were presented the Morris Homes Community Award before 170 guests at The Grange Theatre in Hartford by Mr Kulvinder Bassi, Community Rail Team Leader from the Department of Transport.

"It's the teamwork that counts!"

The Evening was attended by Mr David Briggs, Her Majesty's Lord-Lieutenant of Cheshire and twelve mayors from boroughs, town and parishes across Cheshire including the Mayor of Cheshire East, Cllr Barry Burkhill.

On presenting the awards, Mr Kulvinder Bassi said: "It has been a real privilege for me to present these awards which recognises the outstanding volunteer efforts of so many.

"Through their selfless efforts they have helped transform Cheshire's railway stations, making them such welcoming gateways across the county.

"My thanks go to you all"

On announcing the Awards, Mark Barker, chair of Cheshire Best Kept Stations said "Tonight's Awards Evening is a celebration and a thank you for all the volunteers and community groups who do so much to brighten up our stations in Cheshire.

"You are all winners! - whether or not you pick up an award tonight, this is a big thank you to you all; a party for volunteers and for those who support & encourage you; rail industry, civic leaders and local authorities.

"We can celebrate something to be truly proud of at so many of our Cheshire stations. We have seen some truly excellent work from volunteers and staff at stations right across Cheshire."

Additionally, Alderley Edge station was highly commended for the most improved station.

Mr Briggs concluded the evening by praising the station volunteers across Cheshire who dedicate considerable time to the county and were an inspiration to all.

Paul Maddock
Best Kept, but least accessible for those with disabilities.

Andrew Backhouse
Whilst we will agree with Paul that Handforth is dreadful for access for those with mobility difficulties, the reason we got this award is because we got so many people to work with us to persuade the government and Network Rail to do something about it. Still no absolute date for completion, but we know that plans have been drawn up and given to Network Rail for consideration before it goes to the next stage of tenders. We are not holding our breath for this year, but know access is coming.
Andrew Backhouse, Chair of Friends of Handforth Station

Paul Maddock
After many years of attempts to have anything added at this inaccessible station, I welcome any progress, but have not seen anything regarding any "plans have been drawn up and given to Network Rail for consideration". With the best opportunities for access having passed with works done on the old RBL site on one side and South Acre Drive on the other, over the years - I too will not be holding my breath any time soon.

Andrew Backhouse
The plans as shown to Friends of Handforth Station and the parish council representatives are for lifts on each side, rather than access from South Acre Drive or ramps which might be cheaper and last longer. The money set aside for them is over £2m and promised by the government minister to Network Rail as part of their Access for All funding. Because of the nature of construction, they may have to be lifted in to place and so will have to wait for when the line (and Station Road) is closed for a day or so. This is not likely before 2021at the earliest.

Hilary Peel
The reason we Handforth folk can keep our station tidy is that we have plenty of time in the village as we can’t actually get out of Handforth by public transport. Trains very infrequent to Crewe, Stockport and Manchester, and no accessibility for wheel chairs or pushchairs. Bus even less frequent to Macclesfield and the A555 roundabout!!!. It doesn’t even get you to
Lakeland or the Belfry, where you could pick up a bus to Heald Green. A couple of very redundant bus stops by the Waggon and Horses.