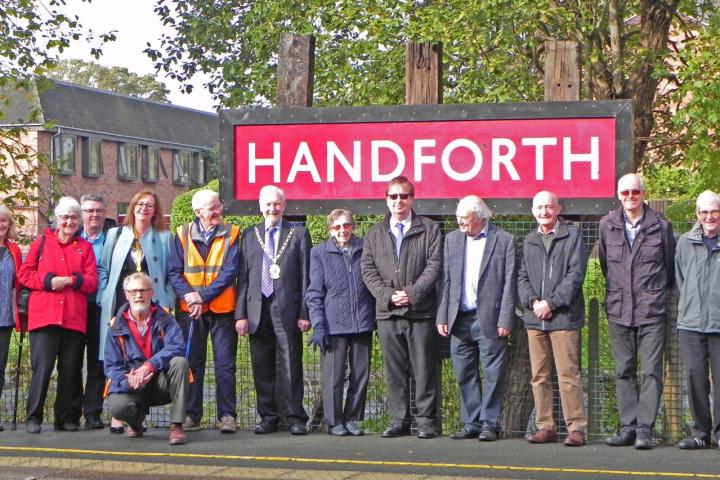 A newly-installed 1950s era Running In board was unveiled at Handforth Station on Saturday, 19th October.

The large sign showing the name of the railway station is intended to inform passengers of their location when aboard a train entering the station, possibly while still moving at speed.

This piece of railway history was bought at auction by the Connolly family, who have kindly agreed to loan it to the Friends of Handforth Station (FoHS) for display at its station of origin.

Andrew Backhouse (Chair, FoHS) welcoming the guests, said "One of our primary aims is to preserve railway history, and we're very grateful to Brian and Nancy Connolly for loaning us this sign".

Hugh Everett (Secretary, FoHS) gave a safety briefing before the approximately 30 people descended the 35 steps to the Manchester-bound platform for the ceremony.

Highlights of the ceremony included the unveiling of a commemorative plaque by Nancy Connolly and a brief address by Cheshire East's Mayor Barry Burkhill, who said "I've been involved with Friends of Handforth Station personally for years and I know how much effort they put into many schemes like this."

Dan Coles of Network Rail added "We're delighted to have worked with the Friends of Handforth Station on this fantastic initiative. Network Rail are committed to working collaboratively with communities across the region to help transform station environments."

When loaned to FoHS, the running in board was in a very fragile state and liable to break. Members of FoHS inserted a stiffening panel of plywood into the rear of the board and applied several types of anti-rust treatment. A timber frame was constructed in the form of a cradle so that the running-in board could be displayed without the need to drill further holes through the enamelled metal. The whole assembly was then mounted on three reclaimed railway crossing sleepers - an exercise needing ingenious engineering and a lot of manual effort.

Dave Ridge
What a brilliant idea. Well done, everybody involved. It looks excellent

Laura Bradshaw
Looks good! Are there any plans to install step free access of any sort at the station? With a young baby and a pram it makes train travel from Handforth difficult! There are quite often some kind people around who will help but not always!

Andrew Backhouse
Readers of Wilmslow.co.uk will probably remember that earlier this year, Friends of Handforth Station had a government minister visiting to announce that the station had gained Access for All money to achieve step free access, thanks to our hard work. Since then, we have met with Network Rail, who are working on the detail of the project, but we know that there is a long way to go on design and the various hurdles that have to be jumped. It is likely to be lift access to each platform, which will require road and rail closures to lift shafts in to place, costing c.£2.7m. The earliest date we have been given for this is the end of 2020, with a possible worst date of 2024. Not what you may want to hear, but at least we can now say it will happen - something we have been pushing for for over 20 years.
Andrew Backhouse, Chair of Friends of Handforth Station

Roger Small
I endorse the above comments of Andrew Backhouse (Chair of FoHS) and, on behalf of FoHS,would like to thank Paul Redwood, Peter Moore, Nick Quinn and Graham Howard for assistance with the conservation of the new running in board, construction of its supporting framework and transport of components to the station.
Roger Small, FoHS Committee Member