Cricket: Lindow shine on pitch and on screen 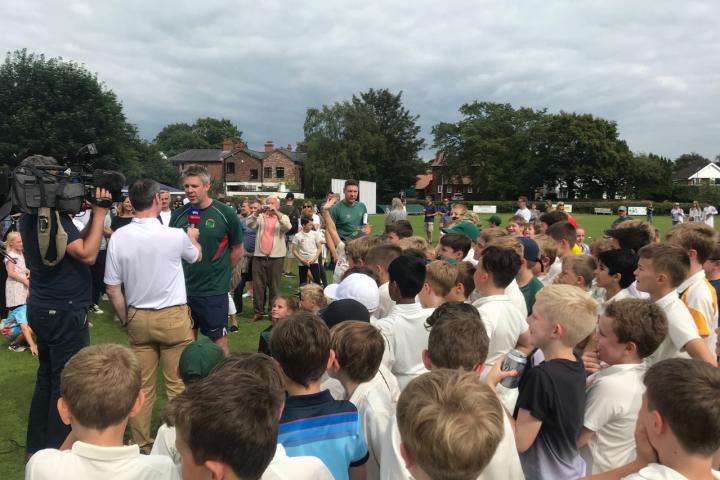 Lindow Cricket Club had the most remarkable weekend, with wins for all the men's teams on Saturday, the club's u15s reached the cup final on Sunday morning and then on Sunday afternoon the club was broadcast live to the nation.

With England in the Cricket World Cup Final, Sky Sports News ran a live broadcast from Lindow's clubhouse to get the reaction to the game from a community cricket club. Members of the club gave live interviews throughout the day and if that wasn't surreal enough, for the drama of the epic last ball finish, Sky News had a split screen live broadcast from Trafalgar Square and Lindow CC! The scenes in the clubhouse as England won the game will be remembered forever and such was the reaction it has now been watched by over 50,000 people on the club's Twitter feed!

This was the finale to the perfect weekend after the club's 1st XI won for the ninth time this season to remain top of the table. After winning the toss away at Christleton, they scored 216-8 thanks to half-centuries from Atiq Uz-Zaman (53), Alex Matthews (56) and Tim Affleck (63). The home side were then dismissed for 130 with Sully Raja the star of the show taking 6-28, well supported by Rana Rauf (2-25) and Affleck (2-30).

Lindow 2nd XI moved into the promotion places with a six wicket win at home to Ashton-on-Mersey. The visitors were bowled out for 121 with three wickets each for Ben Hamilton-Ryan (3-23) and Mark Farrell (3-40) and two for Matthew Ramsden (2-40). Jamie Peel (27) led the Lindow response, which was completed by Henry James (21 not out) and Dave Kendrick (20 not out).

Lindow 3rd XI made history on Saturday by recording their highest ever score - 326-6. Batting first at Mossley, captain Hassan Mahmood led from the front with his first club century (117), putting on 151 with Olly James, who aged only 13 recorded his first half-century (57) in senior cricket. Ateeb Mehmood then came in and hit the ball to all parts, scoring 76 off just 46 balls. Mossley had no answer to the onslaught and finished 79 all out with Paul Wilson taking 5-9.

Lindow u15s booked their place in the cup final with a semi-final win away at Stretford. The home side were restricted to 85-9 off their 20 overs with Will Espley (3-12) and Allaster Livingston (2-13) the pick of the bowlers. This was chased down in the 17th over thanks to a captain's innings from Henry James who finished 47 not out. They will now face Bowdon in Sunday's cup final.

A special few days for the club and the community, which will hopefully inspire even more people in the local area to start, or re-start, playing cricket.

Photo: Lindow's James Bracewell being interviewed as the club's juniors look on.