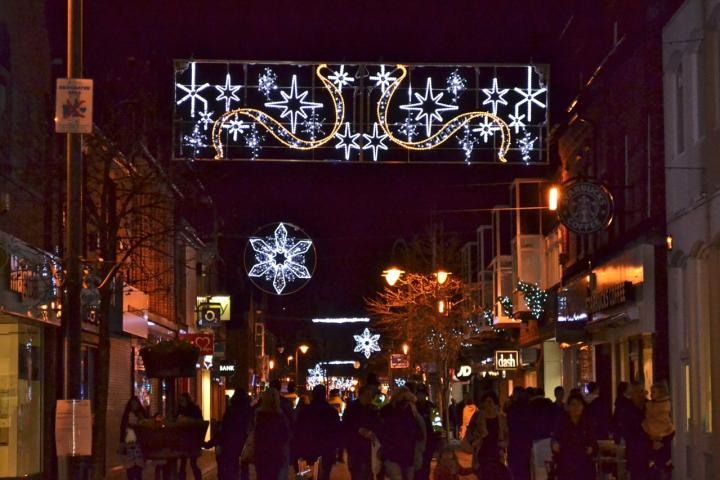 Wilmslow Town Council agreed at its meeting on Monday, 17th September, to purchase new Christmas lights at a cost of £12,860 to replace those along Water Lane, Alderley Road and Grove Street.

When it was formed in 2011 Wilmslow Town Council took on responsibility from Cheshire East Council for the provision of Christmas Lights in the town centre.

Town Clerk Matthew Jackson explained "At that time there had been very little investment in either lights or lighting infrastructure for a number of years and the project to replace and improve the Christmas lights was one of the Council's first major projects.

"The Town Council earmarked funds in 2016.17 knowing that after six years there would soon be a need for replacement but when it considered the matter later in the year felt that the existing lights could be used for one more year."

At its meeting on 17 September 2018 the Town Council agreed to purchase new lights at a cost of £12,860 to replace those along Water Lane, Alderley Road and Grove Street.

The new lights will be in place for the switch on event which this year will take place on Saturday 17th November and will coincide with Wilmslow Artisan Market.

The Town Council is working with a local resident volunteer in putting together the itinerary for the Christmas switch on event and further details will be announced nearer the time.

David Nelson
As it's "Jonesville" maybe the Emerson group or Jones Homes could up their contribution, saving residents' money.

Luke Baker
Weren’t the lights not replaced only a few years ago? Why spend more so soon?

Peter Croome
Look on the bright side - plenty of time to gawp at the fairy lights whilst trying to negotiate all the parked cars in Wilmslow.

Deleted Account
And given what Summerfields Village residents will soon have to put up with for many decades to come ( courtesy of of a certain department within our dear old council ) we can think of at least one benefactor that might want to dig into their coffers to give something to the community . . .