Plans approved for another house on site of former pub 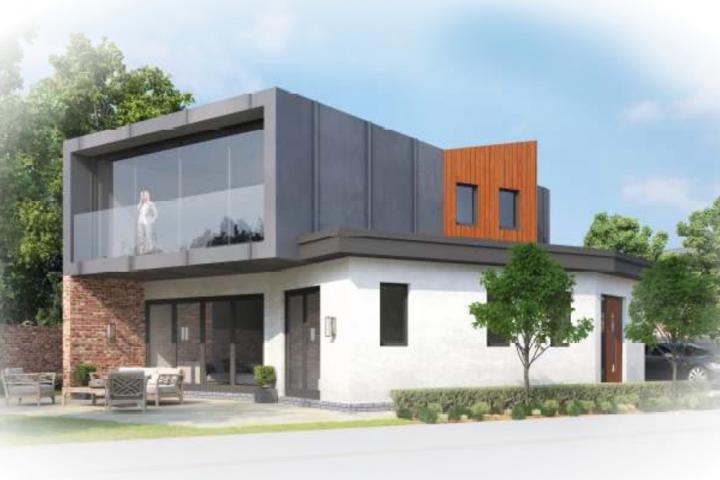 Plans have been approved for a new detached house on vacant land which was part of a former public house.

Having been granted planning permission to replace The Riflemans Arms on Moor Lane with 8 dwellings in July 2013, which are currently under construction, New Moor GB Ltd sought permission to build a two-storey, three bedroom house with a flat roof and three car parking spaces.

The vacant site is situated on the west side of New Street and was previously used as a car park.

Wilmslow Town Council's Planning Committee recommend refusal of this application on the grounds of being contrary to Policy SE2 3(i) of the Local Plan relating to being out-of- keeping with the street scene.

Letters were also received from 16 properties. Concerns raised included the design being out of character with the area; lack of parking on New Street and residents having lost the ability to park on the site; the new house will overlook existing houses; over-development of the site and the impact on trees/hedges and the overbearing impact on the neighbouring property.

Whilst others felt that the design is attractive and makes use of a previously developed site.

The planning officer stated that given the lack of overriding character in the area it is not reasonable to resist the proposal on the basis of design and also that the loss of parking, that once took place on the site, is not a material planning consideration because it was taking place on private land and the land owner was permissive of this.

The application was recommended for approval because the site is in a residential area and is a sustainable location; the proposal is of an acceptable design and does not have an unacceptable impact on the amenity of the neighbouring residential properties.

Peter Bradley
Appalling design, completely out of keeping with the local area; who on earth would want to live in what in essence is a structure that has the appearance of a public toilet

Michael Roberts
What a complete joke, obviously another big back hander going on somewhere
Not in keeping with anything

Guy Beardsley
It’s a well designed. Stunning family home. Modern. Lots of light and will provide a lovely happy home to a family. Built on an existing property site. If we didn’t progress we would all be living in mud huts!

Think of the new family moving in, bringing business to Wilmslow. The parents may well run a business that provides jobs to local people.

I can’t be the only contributor to this site that is sick and tired of the constant negativity and pessimistic comments being left by the majority. We all need to start to appreciate where we live and welcome new housing, new people and enjoy and embrace change. Trust me we are the lucky ones and we only live once.

Jon Williams
It's the worst house I have ever seen and should NOT be built.

Guy Beardsley
Why is it the worst house you have ever seen Jon?

Marc Staples
I like it personally its probably out of my price range though. These comments on it being out of character surprise me when you look at the diverse looking houses in the area.
As Guy said things change and its nice to see something a little different instead of another jones style home.

Jon Armstrong
Guy, you definitely aren't the only one sick of the constant negativity.

Pete Taylor
The only thing missing is a view over Poole harbour...

It’s only the crazy position that the council has found itself in, and the consequences if the local housing stock is not provided according to the governments requirments, that these houses been allowed to be built

The block house is out of place, may be in another location, a very nice house

In its current location, just infill , quite out of place

Roger Bagguley
Clearly there is mixed feeling about the design of this house. It is either an example of superb modern design or a stack of containers better suited to dockland, waiting shipment to some far off land. Neither of these points addresses what is going on on this site: A public house is in the process of being replaced by 8 town houses that are at least twice the bulk of the original, with Juliet Balconies that grossly overlook the rear of houses in Moorfield Drive completely taking away privacy. Now Cheshire East has approved an infill house with a balcony that overlooks the front, side and rear garden of another house in Moorfield as well as completely overlooking the original terrace houses on the opposite side of New Street, the distance between being nowhere near the 21 - 25 metres required in order to comply with building standards. In stating this development is “of acceptable design and does not have an unacceptable impact on the amenity of the neighbouring residential properties” the presiding officer has made a personal decision completely ignoring existing Cheshire East policies designed to bring a quality to all developments. In stating it is not reasonable to resist the proposal on the basis of design as there is no overriding character in the area assumedly this person is seeking to establish a character - a dangerous precedent. Whatever, what has been approved in total by Cheshire East in redeveloping this site contravenes their own policies, ignores the wishes of immediate neighbours, is uncaring and grossly insulting. There is certainly a need to consider how one moves the overall design of a town like Wilmslow forward but this needs to be guided by planning policy and not by the aspirations of individual planning officers.

James MacDonald
I imagine the flat roof will have a large H painted on the top for the obligatory helicopter.

Mike Davies
As an immediate neighbour to this development, I completely concur with the comments posted by Roger Bagguley.

With regards to the design of this building, Cheshire East Planning stated in the Officer's Report:

"The design of the property is a subjective matter and this is highlighted by the fact that representations have been received both objecting and in support of the design proposed."

There were 16 comments received from private residents: 12 objecting and 4 supporting. Of the 4 supporting the proposal, only one lives in the immediate vicinity of the development. In addition, Wilmslow Town Council also recommended refusing the application.

Whilst the design may be subjective, Cheshire East Planning ave completely disregarded the opinion of the majority of local people (75%) and Wilmslow Town Council and determined that it is only their own opinion that matters.

Howard Piltz
This house is totally out of character with the area. Here was the opportunity to provide several ‘affordable’ properties that would blend in with its environment. Shame on CEC ‘again’. The recent adverse publicity the council had received recently makes one wonder if they remain an effective council.

Barry Buxton
Agree with Guy and Jon. It's a pity that the readers of wilmslow.co.uk are overwhelmingly of the whinger variety. Probably Brexit voters too.

(Almost) anything is better than the ugly edifice that was The Riflemans - and it's ugly car park.

Sue Hinchliffe
Oh dear where is one going to park one's Bugatti Vehron, Ferrari and Lamborghini. What a dilemma. Plenty of elevated parking for the chopper but where are the little darling offspring going to play? CEC are a joke. It would be a great modern house in the appropriate surroundings. I dread to think how much it will go on the market for. I can see stormy seas ahead when the arguments start between the new occupants and the residents of New Street who have no option about where to park their cars. Their objections have been shovelled under the carpet as per usual. Shame on the bloody spineless Councillors.

Ryan Dance
There seems to be allot of jealously in wilmslow....compounded by a stubborn resistance to change.

Even our cosy affluent little green villages..towns and cities need to change.

Pete Taylor
Just out of curiosity, do any of those who have commented positively about this house live with 500mtrs of the site?

Barry Buxton
To address "just out of curiosity" cynic Pete Taylor's point: Planning have approved a rebuild for a bigger, flat-roofed, modern-appearance dwelling right next door to my house. I'm living with it.

No. I don’t live near the site of the new house. If I did I would be even more positive towards it. Especially when you see the current building.

I don’t need to justify my comments, however to demonstrate that not all Wilmslow residents are self centred and obsessed with the status quo:

In the last year I have actively encouraged parking outside my house by people then getting on the train to work. I don’t need the space during the day and I want to help people prosper and work and bring spending power into Wilmslow. This included me refusing to sign a petition recently created by a few of my neighbours proposing yellow lines.

I have also refused to be involved in petitions etc against more housing in green belt opposite the estate I live in. My response to the practitioners of the petition (individuals that live on my estate) was that 20 years ago our houses would not have been built if the same petitions were created then. Ie I wouldn’t have been able live where I live. At some point Pete Your living room was a field. Makes you think doesn’t it?

Mike Davies
Pete Taylor: there was one person who commented positively about this house who lives within 500m of the site. The person living the furthest away supporting the application shares the same surname as one of the Directors of the company developing the site, coincidence? or maybe I'm just being cynical.

As far as other comments relating to whingers, negativity etc. are concerned: the majority of people were objecting to the design, not to a house being built on the site, so a new family, and any business they could possibly bring into the area, would be accommodated anyway.

Speaking of the majority, whether you're in agreement or not, I thought we lived in a democracy. However, obviously this is not the case in this instance, given the decision by Cheshire East Planning to ignore the majority.