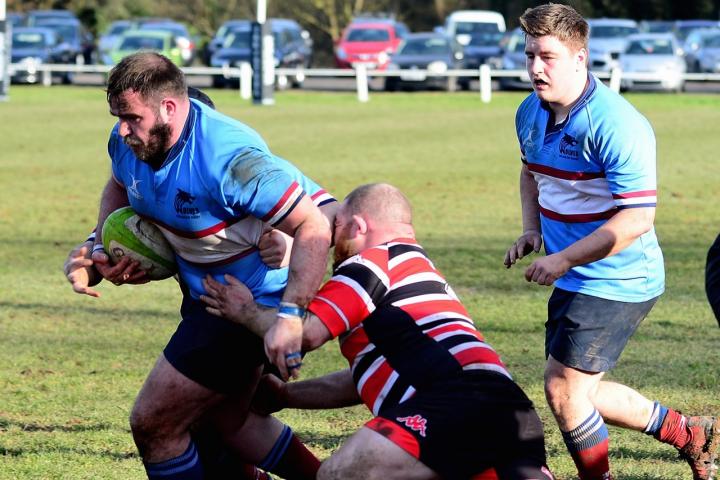 This fixture against a much improved Altrincham Kersal always had the look of a difficult test for the Wolves. Forget that AK started the afternoon lying in the league's relegation zone. Since the turn of the year, they had won three out of five and the team they brought to the Memorial Ground bore little resemblance to the one that the Wolves had despatched last September or even the one due to play here last December.

In Dave Coleman at No. 9, they had a player at the top of his game, sniping around the fringes and varying his tactics with some well placed kicks. Callum Yates at No. 10 barely put a foot wrong and in Matt Geiger, the former Oxford Blue, they had a third playmaker in midfield. With the experienced John Geddis recalled in the front row to marshal their pack, they had sufficient players to control the game and eventually ran out comfortable winners.

Although the set pieces and lineouts were broadly evenly contested, the AK pack was able to retain possession for far longer than their Wilmslow opponents. Even when they were at one stage reduced to thirteen players, their pack's picking and driving on a narrow front was tactically the right thing to do, was well executed and denied the Wolves the possession they needed to exploit their numerical advantage.

In comparison, the Wolves game management was just poor at the critical stages, particularly in the second half when they found themselves chasing the game. Instead of taking the time to patiently build their positions, they were constantly losing possession at the breakdown and in the backs, largely through over eagerness and a lack of patience. Their attacking play also lacked any fluency. When width was needed it was too narrow and the converse was also true.

Consequently, AK controlled the ball for far longer periods. It didn't help, of course, that the Wolves were missing at least half a dozen backs, who in the circumstances may have made the difference. It wouldn't be fair to point the finger too much at their replacements but at least half of them hadn't had much game time for the Wolves this season and it takes time to adjust and to settle in to the pace and intensity at the higher level. On the field, the side just seemed to lack 'savvy', together with anyone who could effectively lead and steer them through the difficult patches. You couldn't fault them for any lack of effort or commitment but once again, it seemed that the only way they were likely to score was through their forwards and in particular from close in catch and drive positions. Both their two tries from No. 8 Alex Taylor, came from this source. Elsewhere prop Jordan Ayrey stood out in the tight and around the field, scrum half Sean Street and full back Elliot Rowe also had some good moments with penetrative running. But that was about it.

For the first quarter, nothing much happened with neither side threatening the other over much. AK, however, ratcheted up the pressure and when they were awarded a scrum on the Wolves five metre line after about twenty five minutes, they kept control and Coleman nipped in for the opening score, which he converted. The Wolves nearly conceded again from the restart when AK broke the defensive line but a forward pass gave the Wolves a scrum and aided by several penalties they forced an attacking position on he AK line, where at the second attempt Alex Taylor drove through to score.

Just after the interval, the rub of the green went the way of AK. The Wolves had made ground in midfield, then got turned over and Coleman's long kick became a foot race which referee Brown judged was won by AK's right winger. It may have been but equally it may not have been and Mr. Brown being some thirty metres behind was in no position to see. At this level of the game, there is no TMO so he backed his judgement to award the try, which Coleman converted from the touchline. The laws of the game state that the referee is the sole judge of fact, so no argument, it was a try, however unpalatable to Wilmslow supporters.

There was still plenty of time on the clock but despite a plethora of penalties in their favour and two Yellow Cards for AK, the Wolves weren't able to make anything of it. Indeed, they hardly got their hands on the ball at all as the thirteen AK players picked and drove their way down the field, slowly and patiently, where eventually they got a scrum from which Coleman nipped over again. With less than ten minutes to go, the Wolves hit back with a second try from a lineout but then frantically trying to get out of their own territory, they conceded a penalty chance to Coleman, who gratefully accepted it and that was that.

A good four points for AK, deservedly won on the day, and, in truth, another tough lesson for a misfiring Wolves outfit.