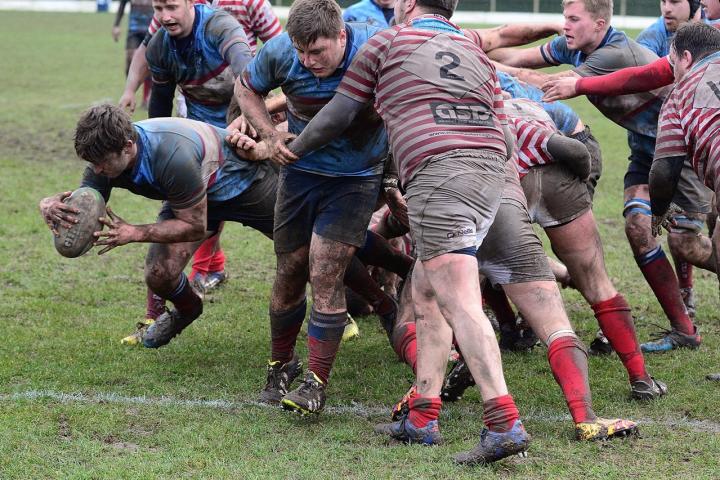 If anybody from Wilmslow thought that the Wolves had only to turn up at Grove Park to secure an eleventh league win, then they were sadly mistaken. Manchester had won their last three league games, including an impressive away performance at second placed Northwich. Their confidence was growing, they knew they could see off Wilmslow and on the day they were deserving and convincing winners.

Wilmslow coach, Rick Jones had known all along that this rearranged game had 'banana skin' written all over it and he was absolutely right. "I was just very disappointed by the way we played", he said afterwards, "there were just too many individual errors from start to finish and we didn't seem up for it. Not one of our backs had a game that they'll want to look back on and only a handful of the forwards played to their potential".

It's no good blaming the conditions. They were the same for both sides. The pitch although wet and sticky was in decent order for mid February and the rain just about kept away for the eighty minutes of play. True, the ball may have been soapy to handle but the fact is that the Manchester players were able to pass it and catch it without anything like the same number of errors of their Wilmslow opponents. They may have conceded more penalties than Wilmslow but most of them until the final minutes, when the game was already, won were in the Wilmslow half. For the most part though Manchester's tactics were pragmatic and effective. Kick the ball into space, chase it and keep Wilmslow bottled up in or around their twenty two. In defence, it was a case of consistently being in their opponents' face with aggressive tackling to drive back the ball carrier and on the ground to slow everything down.

All three of Manchester's tries had their origins in Wilmslow mistakes. The first one after twenty five minutes came when Wilmslow's midfield dropped the ball after a break from Bob MacCallum had set up a promising attacking position. It was booted down field for a lineout in the Wolves twenty two. This was won comfortably enough but then dropped in the backs, seized upon by the home side and moved quickly and simply to Joe Houghton on their left wing who had the space to run in for the try. Their second try came midway through the second half when Houghton this time fielded a weak clearing kick around the Wilmslow twenty two, ran it back and after a couple of phases scrum half James Brodie was on hand for the scoring pass. The third try which settled it came with less than ten minutes still on the clock. Alex Taylor had just scored for Wilmslow to make it 18-10 but the Manchester forwards were up to steal a well placed restart and found men over to put centre Zac Round in. Doug Day converted two of the tries and added three penalties to keep the scoreboard ticking over.

Wilmslow's points came from an early Bob MacCallum penalty and two tries from close in lineouts in the final quarter. No. 8 Alex Taylor drove over for the first one and the second came from second row Tom Bull after Manchester had been penalised several times. Bull put in a thoroughly good shift throughout as did back row Seb Pemberton and Adam Hewitt was always involved but really these were the only three who stood out.

By then it had become hard to see how the Wolves would score from any other phase of play. It's not that they didn't have some chances but they were chasing the game and everything ended with either a loose pass or the ball being dropped and knocked on in the face of fierce determined tackling from the home side. From nine to fifteen, all the backs were equally guilty and some of the forward play, particularly at lineout time wasn't much better.

"All credit to Manchester", added Jones, "their defence was excellent, we rarely crossed the gain line in the tackle, they kept harassing us when we were in possession, they played as though they wanted it more than us and ultimately were thoroughly good value for their win. After such a poor performance from us, we must show a response next weekend when we visit Rochdale. More of the same will just deliver the same result".

Photo: Try for Alex Taylor. His brother Robert looks to be clearing the way for him to get through.