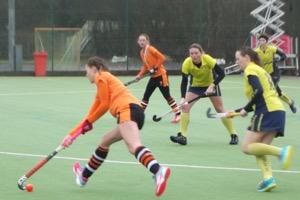 Wilmslow men's 1st team made the trip to a cold north Yorkshire to play second-placed Ben Rhydding, who had only lost one game since a thrilling 4-4 draw at Wilmslow on the opening day of the season.

Wilmslow started well, playing patient and measured hockey and controlling the opening of the game. A well worked long corner taken by Ben James enabled man of the match Tom Davenport and Pete Hallinan to combine well in the circle for Sam Dawson to stoop in at the back post to give Wilmslow the lead.

More good work from Davenport led to Hallinan going round the keeper, who took out the Wilmslow striker with the goal at his mercy. Both sides were expecting a flick to be awarded but only a short corner was given which Wilmslow couldn't convert, with the Ben Rhydding keeper saving well.   Wilmslow continued to control the game, but were dealt an unfortunate blow when the ball hit a Wilmslow defender high on the arm off a Ben Rhydding stick in the defensive circle, before the home side forced the ball over the line to level the scores.

The second half began in the same fashion with Martin Wright and Robin Cooper moving the ball well at the back and picking accurate passes forwards, and with a strong press from the Wilmslow forwards, including debutant Will Townley, stifling Ben Rhydding attacks at source.   As the half went on Wilmslow absorbed increased pressure from Ben Rhydding until a short corner could only be stopped by Wright's kneecap on the line. Si Pickering dived low to his right to keep out the flick and keep the scores level.

Wilmslow kept the Yorkshiremen at arm's length and countered with speed, but Ben Rhydding took the lead through a short corner routine with only 15 minutes left.  Wilmslow kept pressing but were unable to make another breakthrough. Although a 2-1 loss was not the desired result, Wilmslow produced one of their best performances of the season in the circumstances and will look to continue their good form next weekend with the visit of Leeds and a trip to Newcastle.

Wilmslow Mens 2nds had a comfortable 6-0 win against Liverpudlian visitors, Mossley Hill 1st. Mens 3rds beat Bangor University 2nds to go 8pts clear at the top of the table and the 4ths had a 10-0 romp against a youthful Didsbury Northern side.

With the squad still depleted and no coach at hand to ‘rally the troops’, it was up to the ladies to muster up yet another match winning performance.

Despite some smooth transfers and neat passing from defence and through midfield, the team struggled to put away several strong scoring opportunities against a very seasoned and experienced Sale squad.

The persistence of the Wilmslow attack eventually lead to a run of short corners. The visitors defensive skills again made it hard for the hosts to capitalise until a rebound fell nicely to Emilie Kelman at the top of the D. A beautifully timed mis-hit bobbler of a shot wrong footed the experienced keeper, putting the team awkwardly but still deservedly 1-0 up at half time.

During a chilly team talk the ladies decided they’d do better in the second half by passing to each other rather than the opposition in the final third.

Despite this ‘new year’s resolution’, it was Sale who looked more threatening to start as Wilmslow lost their concentration and shape briefly. With words of encouragement coming from the dug out and the sideline, the ladies soon found their stride and regained their control over possession.

A man of the match performance from Hannah Kelman in midfield and solid effort from sister and captain Charlotte in defence kept Wilmslow repeatedly on the edge of scoring but Sale’s forcefield of a keeper prevented any further goals. Keeper Lang played her part at the opposite end, making several excellent saves to thwart any equalising opportunities and the ‘damp squib’ ended 1-0 at full time.

Next weekend the squad looks to be injury and flu free and back to full strengths as they wander to Wales to play Wrexham where they hope to continue their undefeated run and top table spot.

Ladies 2nds beat Knutsford Ladies 1st, 2-1 to stay leader of their league. The 3rds went down 0-1 to Warrington 2nds in a close contest but Wilmslow Ladies 4ths had an excellent 3-0 away win against Oxton 4ths to keep in second place.