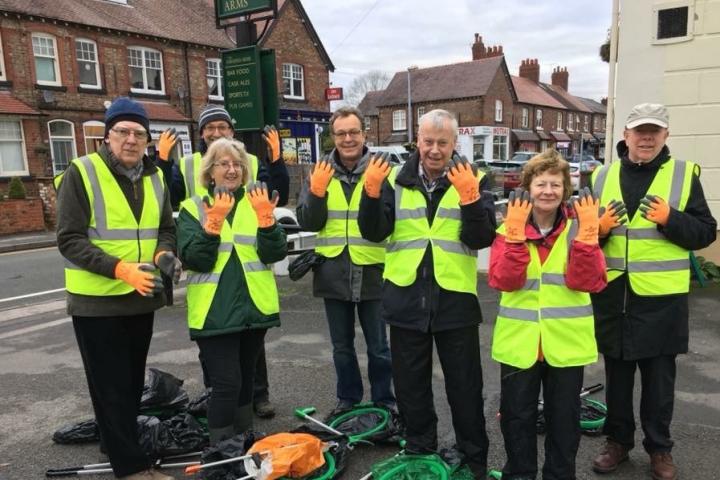 A group of volunteers who help keep Wilmslow tidy have completed their final litter pick pf the year.

Unfortunately they had to cancel their litter pick on Saturday, 9th December, due to bad weather conditions which meant their official bag count for the year was 343.

Sally Hoare said "Of course we have several volunteers that also go out on their own, our unsung heroes.

"Please can we give a big thankyou to all our volunteers and everyone that has supported us this year, helping to make Wilmslow such a pleasant place to be."

Wilmslow Clean Team were set up in October 2013 and started their litter picking events in the December 2013, since then they have collected 2013 bags of litter.

Andrew Wright
I think a big thank you is in order for this team. It is sad that we need teams to keep the town clean but that shouldn't diminish their efforts.

Ruth McNulty
The Clean Team undertake valuable work in the town and the In Bloom team were delighted that the RHS have formally recognised their contribution to the environmental appearance of Wilmslow.
That which any number of the Clean Team say to me, on the occasions when I join in their litter picking activities, is why do people drop litter in the first place. Why, when there are over 80 litter bins in and around the town centre alone, would people drop litter rather than taking their wrappers either home or to the nearest bin?
What practical measures would contributors to this site advocate to discourage littering in the first instance?

DELETED ACCOUNT
Ruth - I think members of the Clean Team should start going into the schools and give talks on valuing the town and why littering is unacceptable. They could start by doing a "clean up" of the litter around a school and then take the bags of litter into assembly for them all to see.

Secondly, they could get all of the coffee shops and takeways to have posters in their windows about not littering the streets.

Sheila Hallas
Agree with that Jackie.
One of the worst spots is the path from the High School alongside the railway line. A disgrace to the school and the town.
A detention option should be litter picking here, though doubtless reasons against would be Health and Safety.
The Clean team would surely be willing to monitor a school litter pick, in the hope it would change behaviour.

Paul Jabore
A big thanks to all of you in the Wilmslow Clean Team.

Sally Hoare
The Cleanteam do go into schools and talk to groups.

Clive Cooksey
Well done you guys & gals. I would join you, except my creaky joints wont let me, but I REALLY appreciate the work you do. Have a Merry Christmas,you deserve it.