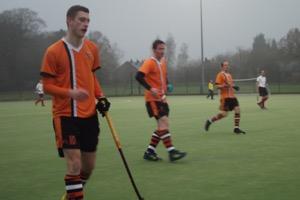 Wilmslow are establishing Oakwood Farm, Styal as a venue to be avoided for North Div 1 sides. Stockton became another North Eastern scalp.
The home side pressed from the start and went ahead with a goal from Tom Davenport, deflecting a ball across from Matt Westbrook over the opposition goalie. Wilmslow continued to pressurise Stockton, turning over the ball and created several more opportunities without troubling the score.
Following a good piece of skill by Cam Armstrong the ball was given to Pete Hallinan who drove on against the onrushing GK. Pete danced round the GK and put the ball towards goal where a Stockton defender stopped in going in the goal with his foot. Matt Westbrook, back in the hot seat, put there resultant penalty stroke in the left of the goal to make it 2-0 at the break.

The second half started with much the same, penalty corners won, chances not taken to put Wilmslow out of sight. Eventually a flowing piece of play from the back through to forward Pete Hallinan saw him turn and put the ball under the goalie to make it 3-0.

The last 15minutes saw the opposition manage to bundle the ball over the Wilmslow line to make it 3-1. Wilmslow kept their heads and saw out the game for a much deserved win.

Mens 2nds thumped Wrexham 1sts 8-1 with four goals from Steve Edmonds and a brace each from Ric Pheiffer and that man, James Bell. Bell takes his tally to tem goals in four matches. Mens 3rds beat Neston 5s 4-1 to extend their lead at the top of the table. In the other league match Wilmslow 4th beat Wilmslow 5th 5-1 despite the encouragement given to the underdogs by the home crowd.

Wilmslow, although still unbeaten, dropped two points at Timperley. This dull and damp Saturday saw the ladies 1s travel to Timperley to face their 2nd team.

With Timperley 1s not having a match that day, Wilmslow knew it would be a tough day at the office, with several of their 1s players fielded against the visiting team.

A fast and physical game ensued with the Timperley team creating havoc in midfield. Not to be deterred, non stop strong performances from Hall and Harrison between midfield and defence held the home team at bay. The rain had made for a super bouncy pitch with both teams struggling with their first touch. One such bounce found keeper and man of the match Lang having to make an epic save from point blank, keeping the two teams level at 0-0 by half time.

The second half saw more end to end hockey with one team looking dominant briefly before the other would take hold. Only an umpiring error to award Timperley a short corner deep into the second half broke the deadlock. An initial shot was thwarted but Wilmslow were unable to clear the ball out and a lifted shot found the net.

Wilmslow, spurred on by a sense of injustice, went to attack with more determination than before. In less than five minutes after going a goal down, a fast break found numbers in the D and Walters managed to get the ball across the line. This invigorated the ladies to continue pressing for the winner, but it was not to come.

A final score 1-1 sees Wilmslow slip to second on goal difference though they remain the only team undefeated in the league so far with the best defensive record.

Timperley made it a miserable day for Wilmslow Ladies by beating both 2nds and 3rds by the same close 2-1 margin. In the other league game Wilmslow Ladies 4ths were beaten 5-3 by league leaders Deeside Ramblers 4ths.