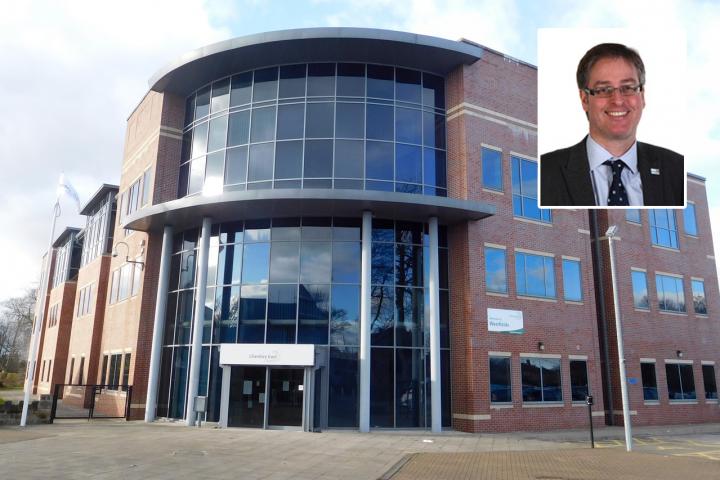 Concerns were raised earlier this year over the conduct of one or more senior officers at Cheshire East Council.

The Investigation and Disciplinary Committee met on Monday, 10th and Tuesday 11th April, to discuss the issues raised.

At the time the Council would not disclose any details regarding the nature of the concerns raised about officer conduct or whether the committee was investigating the conduct of any other officers.

Following this meeting the Council has confirmed that the committee reviewed its previous decisions regarding the Chief Operating Officer and a decision has been taken to suspend him.

The chairman of the investigation and disciplinary committee, said: "We would stress that suspension is a neutral act taken in the interests of both the council and the individual. It would be inappropriate to make any further comment at this stage."

A spokesperson for Cheshire East Council said "Appropriate arrangements will be put in place to ensure that the responsibilities of this role are covered."

Nick Jones
The time has come for a new start ... This is ridiculous.... scrap CEC ASAP... let Cheshire West take over !

Pete Taylor
My FOI request regarding the true cost of these suspensions is due in this week; guess that I’ll have to ask for an update.

CEC has been unfit for purpose since week one. Surely it is time to apply for a winding-up order?

"Suspension is a neutral act, taken in the best interests of all parties. Appropriate arrangements will be put in place to ensure that the responsibilities of the role are covered."

Vic Barlow
"Suspension is a neutral act,"
Not if you are a taxpayer footing the bill it isn't.
Based on previous form I'd say this whole shambles will conclude in about 18 months time with some waffle about a 'mutual understanding' involving a huge pay off and the departure of said executives to pastures anew substantially better off for the experience.
I'd be surprised if the whole episode including all three suspended executives costs us less than £1M taking into account the cost of cover for their garden leave, cost of god knows how many investigations, pension payments and pay-offs.

The taxpayers who funded this entire fiasco will be tapped up again for another increase in council tax to pay for CEC's ineptitude but will be told nothing.

No commercial organisation could survive this.

Barry Stafford
Well said Vic. This is a total farce. Is it 4 now on paid leave?. Started with Wurzel Chief Exec. She went on sick leave. Then paid large amount to retire. Most go through the revolving door and go to another council. On increased salaries and pensions..Baz

Jonathan Follows
"Suspension is a neutral act" is just a silly mantra but what it really means is that the person has been suspended because there is credibility in the concerns raised which warrant proper investigation.

Steve 'Buck' Taylor
What's this 'neutral act' all about and why have they not said what the misdemeanour is? Let's face it non of this lot seem to be 'fit for purpose' and that being the case is get rid if the CEC altogether and get the other lot of Cheshire West to do what these set of clowns can't do. Off with their heads.

Chris Wigley
I suspect if you are a senior member of staff at Cheshire East it is almost a badge of honour to be suspended judging the number who have been over the last few years!

Cheshire East need to be careful about the length of time they suspend staff without completing their investigation, prolonged suspension may be seen as constructive dismissal as the longer a suspension takes place the likelihood of a return become harder.

Maria Quin
I agree wholeheartedly with all the above comments and think CEC are a bunch of bandits. How come they’re allowed to hide the facts of misconduct by senior executives from the folks who pay their salaries (US)! Don’t know the inner workings but wonder if there’s anything we, as residents, can do to get rid of them? They’re ruining our lovely town day by day and it really upsets me that we seem helpless to do anything about it!

Gerald Norden
The problem is that bandits in high office leave or are forced to leave a super-job, they then network to find themselves another super-job through their established contacts - it is a problem of our corrupt society.
"Failure" is rewarded, severance benefits and a new office.

Gerald Norden
The problem is that bandits in high office leave or are forced to leave a super-job, they then network to find themselves another super-job through their established contacts - it is a problem of our corrupt society.
"Failure" is rewarded, severance benefits and a new office.

Robert Kemp
Is it not time that our MP got involved in this fiasco? I thought that she was supposedly keeping a close eye on Cheshire East after their other major problems in the past couple of years.

Janet Taylor
So what can be done about a whole council wholly unfit for purpose because trust me, the rot goes far beyond these suspensions. Funny that when I enquired to the council about cancellation of the 378 bus service, they had cancelled the service, had a three month trial of a different route and subsequently cancelled that before I got a reply, something approaching 6 months.

Nobody responds within the set time scales to anything, be it a complaint, enquiry, FOI request or question re a planning application.

Our services are shrinking by the week, my 88 year old mother is now completely housebound when I am at work. There is no solution to this and I am very worried her health will decline. CEC don't care about this. They do care however about refurbishing the Town Hall, turning out the furniture, fixtures and fittings and renewing them all just a few months ago, around the time they were further reducing our bus services.

Don't get me started on the state of the roads.

So basically we are paying our Council Tax to administer Cheshire East Council, there must be something that can be done when residents are so seriously affected by the cuts.

Don't worry, Cheshire East have a plan to stop the cuts.

They are going to put your council tax up by 4.9%.

This money will also fund the extra infrastructure needed to support all these new houses. CE have admitted that council tax and government funding does not cover the cost of services to people, so all these new homes mean stretching their budgets even further - hence the need for the big council tax rise.

Still, I'm sure your pay or pension will also rise by 4.9%, so whats the problem? Won't it?

Unfortunately, there is nothing to be done till May 2019 and the next local election though.
Still, their new office furniture is nice.

Nick Jones
“ Two basic rules of government ..Never look into anything you don’t have to, and never set up an enquiry unless you know in advance what its findings will be”…