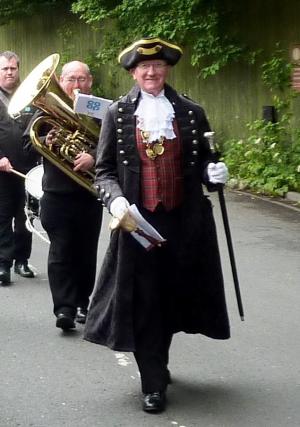 Wilmslow is getting a town crier who has volunteered to attend as many events as possible.

Whilst he has offered to provide this service free of charge he requires an outfit at a cost of £750.

Wilmslow Dean Rotary Club has agreed to pay £250 of this, and would use the services of the town crier for events they are organising in the town, and Wilmslow Town Council will fund the remaining £500.

The regalia will remain the property of the Town Council and there is a second person who has also offered their services free of charge, when required.

Speaking at the Town Council meeting on Monday, 20th November, Councillor Frank McCarthy said "The thing about having something like this is it raises the profile of the council and the works it's doing. Also it adds a great deal to these things. Those of us who have actually seen this particular gentleman at work will realise it raises the whole thing to a different order altogether.

"We don't have a mayor, yes we have a chairman of the council, but something like this can do a great deal for Wilmslow. It's not just for us giving information it's the sort of thing people coming into Wilmslow would look for, making Wilmslow a place to come as a tourist thing."

Councillor Keith Chapman commented "I am somewhat dubious about it. Not on financial grounds actually but more on the grounds that is it the right modern image for Wilmslow today? When we're talking about the internet do we need someone with a bell?"

Councillor Angela McPake said "I have some doubt. From a PR and marketing point of view I can see the benefit, of course I can and I get your point about raising the profile about everything we're doing.

"There are enough organisations in Wilmslow who could make use of this gentleman doing the events, we could probably fill his diary every weekend, my concern is about money. I know £500 is a lot of money and I know its our bit of kit at the end of the day but there is a bit of me that is wondering how it will be interpreted by the people who perhaps don't understand the nuance of how important it would be and are they just going to see it as us frittering £500."

Councillor Frank McCarthy added "In this day of the internet and all of that, one of the great difficulties we have is communication. All of us who have been trying to communicate with people about the various things know how difficult it is to do in a town such as ours."

Councillor Gary Barton said "I think it was interesting the comment about it being a bit old fashioned for Wilmslow. Wilmslow is a very old town indeed, with an Anglo-Saxon name and the site of the discovery of Lindow Man from the Bronze Age.

"There is a risk this is a bit naff, I do understand Councillor McPake's concerns - I share some of them myself - but I think it is worth trying, particularly in terms of the financial backing from the Rotary Club."

The Town Council voted in favour of spending £500 on regalia for the town crier, with the exception of Keith Chapman who voted against and Joan Fitzgerald and Angela McPake who both abstained.

Ade Whitaker
Is it April 1st?

Gillian Slater
So we are to have a Town Crier. This having a long history as a village, where is the Town Hall that would justify such a move? Also doesn't The Council have to offer the post out as equal opportunities? i.e. Man and Woman to be offered the post. Or perhaps the post to be offered locally. Your comments please?

Peter Evans
"Frittering £500" doesn't even come close to describing this. It's beyond belief that this is worthy of wasting our council's time on. If this and "thinking long and hard" about where to switch on the Christmas lights is the best these folk can do then it's about time we spotted we don't need a town council.
I did feel a need to check that it wasn't 01/04 or I had accessed a Monty Python website.

Oliver Romain
WTC where’s your ambition? Why not make a promotional video? After all other councils like Stoneybridge have one. Check it out here https://youtu.be/cTsvLjAzozE.

Stuart Redgard
No Ade it isn't.

A service provided for no cost. An outfit that will be the property of Wilmslow Town Council 33% of which is being paid for by a Third Sector Organisation.

Sounds like a good deal for the Town in my opinion.

Wilmslow may well have once been a "village", but I've always classed it as a town ever since I came to live here just over 23 years ago.

When I first came to Wilmslow, I do recall meeting people who still referred to "going into the village", but they were all more than 25 years older than me.

The justification for having a "Town" Council rather than a “Parish” council was made by the newly elected Parish Councillors following a debate and vote at their first meeting some time in May / June 2011.

The Town Council have not created a post of Town Crier. The article quite clearly states that this is a volunteer who has offered their services as a Town Crier. The article also stated that they have recently moved to the area, so they are local. This volunteer is male. If you know of any person who is female or transgender, and who wants to volunteer, then I believe that the Town Council would be quite prepared to discuss accepting any other offer as well.

Dave Cash
I side with the doubters.
The 'Town Crier' is an 18th Century anachronism, from when many people could not read nor write.
Most towns/villages can lay claim to a 'history', but I can't identify any part of current Wilmslow that predates the 19th C.
Will a single costume fit both volunteers?
Are we regressing to similar earlier WTC argument for replacing missing WUDC regalia?
As this site and WTC website shows most residents have access to info, even without Internet at home orstanding in the Town Centre/Market Square
If WTC wants more analoq exposure they could invest in a larger WTC noticeboard.

Everybody is entitled to their opinion. My differs from yours and the other "doubters".

The 'Town Crier' is NOT an 18th Century anachronism. There is historical evidence dating back to Roman times to suggest they were in use then.

Alan Brough
I think it's entirely apposite that Wilmslow Town Council should regress to having a gentleman in expensive, old-fashioned garb to "bark" at us at public events.

I also look forward to the installation of a Ducking Stool and Stocks so that we might show our appreciation of the myriad ways that they find to waste our money.

Oliver Romain
How about filming the crier and, wait for it, this is the really clever bit, you could put it on the ‘Internet’.

Laurie Atterbury
If the gentleman is from North Manchester won’t there be an issue understanding his different accent?Seems a bit self defeating? Seriously though, I think it’s a good idea and look forward to him competing in the annual Town Crier competition that was held at Chester a couple of years ago.

Pete Taylor
I went (by accident) to a town-criers' competition in Sandbach a few years ago. Most of these excellent folks were built like barrels on legs, with basso profundo voices to match; if we are buying the fancy-dress as something which could be handed on to the next incumbent, it might be an idea to order XXXXL and take it in a bit for the chap in the photo.

David Nelson
I'm with Alan Brough on this.

Gillian Slater
so what do we think/imagine the Town Crier would cry about? Would it be the appalling methods of car parking by drivers, or the weather, or the shop sales, I genuinely would like to what people think. Seriously though

Marianne Martyn
Can't see Chester complaining about their town crier. It is one of its attractions. If people say that nothing happens in Wilmslow, this proves the point that people do not know what actually goes on on their doorstep and that they are unaware of the efforts made by the Wilmslow Town Council, the Rotary Club and other organisations to make Wilmslow a better place to live in! What should the image of Wilmslow be - ultra modern, luxury, coffee shops, restaurants, sales, a dormitory for football players and a temporary home for employees of multinationals, or a place with a sense of community spirit, involving people in events and fostering a pride in Wilmslow and its history?