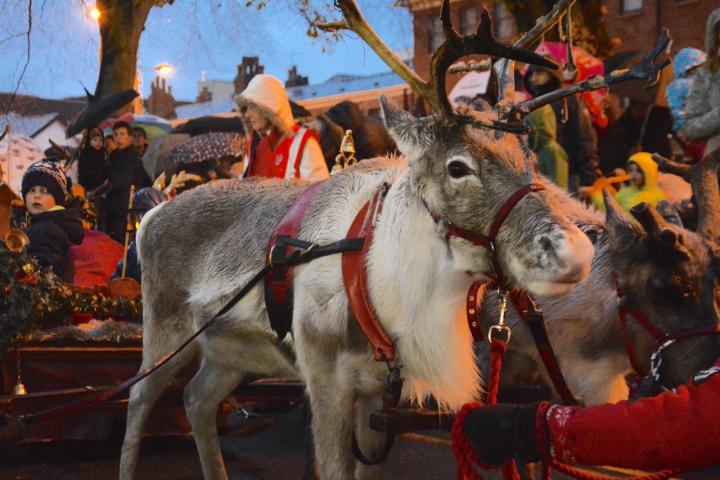 Having agreed to take back the running of the Wilmslow Christmas Lights Switch On event, the Town Council discussed whether to go ahead and book reindeer again this year - which resulted in a quite a debate.

Speaking at the Town Council meeting on Tuesday, 18th April, Town Clerk Matthew Jackson said "The reindeer situation is familiar to most. It's been an integral part of the Wilmslow Lights Switch On since the Town Council took it on, in I think 2012.

"There's also been a debate regarding the animal welfare aspects of reindeer, I think that's the one that we probably had a fair bit of debate about last year. And a third one, as well, it's also about whether the Town Council, or in last year's case the Business Group, is prepared to get off the boat as it were in terms of delivering reindeer in terms of the views of the public, which I expect are mixed."

When asked whether reindeer could be booked at a lower cost elsewhere, Matthew Jackson said "I am aware there are alternatives which are cheaper."

He added "Certainly from what I have seen on the television programmes which have been about this particular herd, I have got confidence that they are the best looked after. I cannot say, because I am not a vet, that they are not stressed. It's certainly not a natural environment so I think there's a debate to be had. I think if we are going to have reindeer I can sleep at night with these reindeer because I know they are better looked after than others."

The Community and Order Committee were able to make the decision themselves but decided to take it to full council for their consideration as it proved such a 'contentious issue'.

Members of the Town Council voted in favour of booking the reindeers with the exception of Councillor Bradley Russell who was strongly against the proposal.

He said "It's incredibly outdated, reindeer have got no place in the centre of any town. We should not be supporting the exploitation of animals as a town council."

Councillor Keith Purdom "I am one of the ones who's had the privilege of doing the marshalling on a number of occasions. My observation would be that for parents and children that are actually at the event the reindeers are actually a big part of this.

"The kids are so excited to see the reindeer. The whole mythology of Father Christmas, he always has reindeer so given assurances that we've had from Matthew's work I would vote very strongly to keep them as part of the tradition Christmas scene in Wilmslow."

Councillor Frank McCarthy added "The working party did give a great deal of consideration to this. My own personal feeling is, having been a steward for the last few years at this event - when I have personally walked along beside the reindeer all the way from the start to the finish of it - I have been very aware to look to see if I think they are distressed at all and I saw no evidence personally of that and I think people do feel this is Father Christmas.

"It's a great part of our Christmas in Wilmslow now, if we didn't have these what sort of parade would you have?"

What do you think about the reindeer parade? Would you like to see it contunie as part of the Wilmslow Christmas Lights Switch On, or not? Share your views via the comment box below.

Sandra Cox
I am glad that you are considering the reindeer issue so carefully. My own view is that there is no need to bring them into the town centre and the money would be better spent if it were donated to the Captive Animals Protection Society.

Nick Jones
Waste of money. These poor animals shipped from where Cairgorm ?.. for parades in Wilmslow and elsewhere ? No concern for animal welfare here then. Nonsense.

Marcia McGrail
These animals are domesticated & if not given a job to do, might as well enter the food chain so the naysayers should take their choice. The welfare is monitored & appears to be of the highest order - if it were proved to be different, I would be the first to decry it.
As for the cost, I am sure that the crowd enjoying the reindeer parade would be happy to contribute towards the upkeep.

Simon Worthington
Lovely with a side of chips. Most likely that is where they would end up in their natural environment - or eaten by wolves. A trot around Wilmslow sounds much nicer.