Call for action to clear rubbish from River Bollin 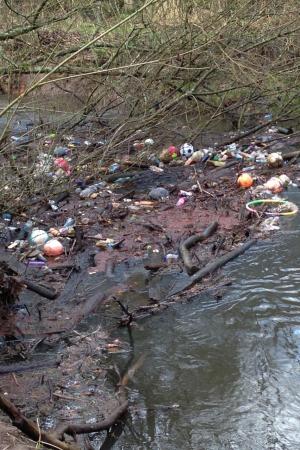 Local residents and volunteers are calling for action to be taken to clear the significant amount of rubbish which has been dumped in the River Bollin, between The Carrs and the start of Styal Woods.

A Wilmslow resident reported the rubbish to Wilmslow Clean Team saying "The rubbish is densely packed and extends about 5m x 3m, including lots and lots of balls of different sizes and a hoop. It is in the River Bollin trapped in a raft of natural debris under fallen trees and is in the river itself."

Adding "It really needs professional environmental experts to get into the river with specialist equipment as there is so much of it. A flood could release all towards the Mill race which would be very detrimental."

Wilmslow Clean Team then contacted Ansa Environmental Services regarding the problem, who referred the matter on to the Bollin Valley Partnership, based at Cheshire East Council.

Emma Houghton of Bollin Valley Partnership said "We have already been made aware of this build-up of rubbish by the Friends of the Carrs and have asked Colin Gorner from NT Styal to have a look at it. The NT are the landowners in that area and do quite a bit of rubbish removal in the river."

Alan Brough
Renews your faith in "The System" doesn't it?

And someone has obviously reported it to wilmslow.co.uk who are reporting it to us.

Terry Roeves
99% organic matter - wood and reeds plus a few balls and unusually a hoola hoop. R Bollin has been a great source of soccer balls over the years for our g'son, from shallow parts using a fishing net.
It's a typical build up against a tree obstruction - nothing of consequence, that wouldn't have headed down stream without problems.

Pete Taylor
No doubt a fair proportion of this will have come from as far away as Macclesfield.
Is it not the case the the Environment Agency are responsible for dealing with river pollution, rather than the pass the parcel of other bodies mentioned?