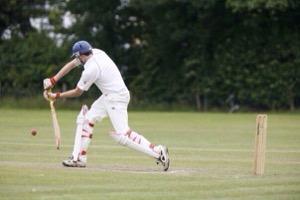 On a breezy day in Winsford, Wayfarers 1st Xi captain Mape lost the toss and his team were put into bat.

Openers, Hassard (46) and Wright (28) made a careful 40 partnership before Wright was bowled, Seal came and went before helpful contributions from Clinch (17) and Condliffe (22) ensured a modest total of 157, Webbo finishing with five wickets for the hosts.

Captain Mape (2-40)managed to strike two early blows and Wigley (1-23) kept his conpuser opening at the other end.

However the Crelin twins managed to steady the Winsford innings putting on 48, however it was Andy Bruce who produced a vital spell of mind-boggling Swing bowling (6-39) from his 15 overs which proved to be the winning formula, as Winsford fell for 134.