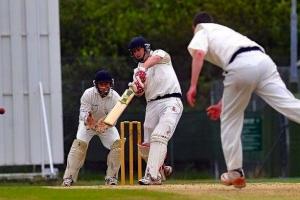 In the second to last game of the TACS Cheshire league season, Lindow 1st XI travelled to Runcorn in the hopes of cementing their position within the 1st division after promotion into the league last year.

On an overcast and drizzly Saturday afternoon the home side won the toss and elected to bowl. Despite movement both in the air and off the pitch, Runcorn's opening bowlers failed to take advantage of the conditions.

Booth (68) took on the attack from the first ball, sending the ball to the boundary ropes and continued to do so in an aggressive but calculated manner throughout his innings. Peel (14) supported Booth well, rotating the strike at every opportunity to let his free scoring partner pile the runs on the board.

The home site finally opted for a change of bowler that had the desired effect and both openers were sent back to the club house in the space of just one over. Baker (36) and Braddock (7) started positively and quickly added to the total before Braddock's wicket fell.

Lindow's overseas was then joined at the crease by Tyler (35) who was equally intent on peppering the boundary ropes and, with a little luck via some missed opportunities by the home side, successfully motored the visitors onto 155 and well into the point's zone.

Runcorn then managed a flurry of wickets, firstly breaking the partnership by taking out Baker and then Tyler followed him shortly after. Haworth (34) and Bracewell (16) continued the aggressive manner in which Lindow had been batting, taking on the young Runcorn seam attack and quickly moving the visitors on to maximum batting points at 180.

With the loss of Bracewell, a final push for runs from McBride (6) and Howarth brought the home side to one of their highest scores of the season and the defendable total of 223-6.

Lindow's opening bowlers began with a vicious intent and intensity that matched their batting performance. Haworth (2-34) struck first, forcing one of Runcorn's opening batsman to retire injured after an aggressive short ball nipped back down the slope and into the batsman's arm.

Walker (55-2) from the other end managed to seam the ball back up the slope to take out the off stump of Runcorn's number 3, leaving their remaining opener and overseas at the crease. The batsmen began to dig in, butting any loose balls away to the boundary and surviving the better ones before Walker found the seam once more, this time utilising the slope and taking out the leg stump of the left handed opener.

Tyler (27-2) and Ramsden (29-2) added some variety to Lindow's bowling attack and encouraged some lofty shots from the home side as pressure began to mount. It was only a matter of time before the ball went to hand and after some missed opportunities by the visitors the catches finally began to stick as Ramsden and Tyler took out the middle order with equal rewards for their efforts.

With a little under 100 runs to chase down by the tail end, survival appeared to be their priority moving into the final overs of the game. Howarth managed to find a gap in their defence with a well-aimed yorker to take the 8th wicket but time had run out with the home side concluding their innings on 150. A well-deserved winning-draw for Lindow that sees them finish respectfully in 8th position with just one game to go.