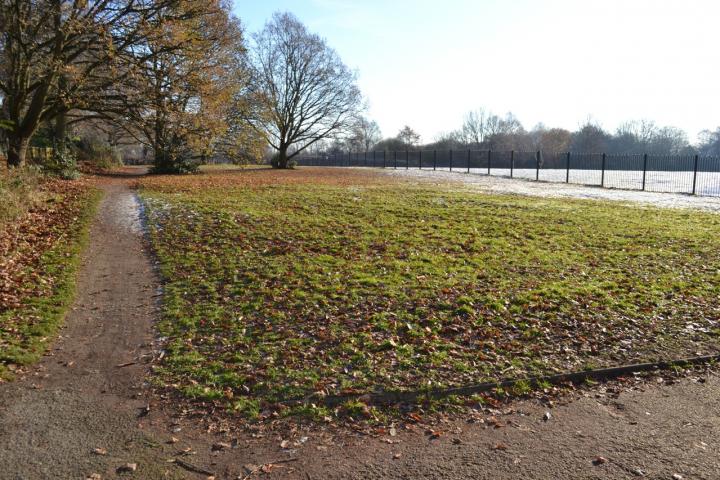 A public inquiry will be held shortly into an application for land to the rear of Gorsey Bank Primary School to be registered as a village green.

Cheshire East Council, who own the land, objected to the village green application and decided back in 2010 that a non-statutory public inquiry be held.

Local resident Chris Stubbs, on behalf of the Friends of Gorsey Field, submitted a village green application in March 2009, for the top field behind the school - which is bounded to the north by Alton Road and to the west by Gorsey Road.

According to Mr Stubb's application the land is a village green because it has been used as of right for lawful sports and pastimes for a period of at least 20 years, by a significant number of the residents of Pownall Park. His application is accompanied by 97 supporting statements.

Objections to the application have been submitted by Cheshire East Council and by the Governing Body of the Gorsey Bank Primary School. They have objected on the grounds that any use is not: by the inhabitants of a locality or neighbourhood, by a significant number of such inhabitants, use "as of right" and the uses claimed do not qualify as lawful sports or pastimes. 83 objections have been lodged.

Chris Stubbs said "There appears to be some concern that the application, if successful, will impact on Gorsey Bank School's activities. I don't believe this would be the case, as the application only covers the "top field", an area that gets minimal use from the school at present, and has been ruled out of bounds for Reception and Years 1 and 2. Access would be available to all, so the area would still be accessible for the school to use when required.

"The reason for the application is unchanged from when it was first submitted, and is to ensure the area of land does not become subject to development and is available for the use of future generations of Pownall Park residents and the local community, including the pupils at Gorsey Bank School."

Karen Mclaughlin, a parent at the school who will be speaking at the inquiry, said "A few years ago the school made the playing field larger as the number of pupils has doubled since Gorsey Bank opened 50 years ago. This meant that the average square metre of open space per child was brought up to date and now complies with the current curriculum requirements. Gorsey Bank now has 420 pupils in the school.

"The school erected a fence that would keep our children safe and still allow for aesthetics to local residents by being able to see the green space rather than a solid structure around the field which would obstruct the view of the grass.

"At the time that the planning application was submitted there was scaremongering among local residents that the school had extended the field so that they could sell the land off in the future to developers or build further onto the school and make it much bigger. These rumours are totally unfounded and untrue. It was also suggested that the children barely used the top end of the field.

"The whole field is used every day during break times, for P.E., sports clubs and running club. Sports Day illustrates just how much all of the field space is required to accommodate all of the children at one time."

Karen added "We have the Carnival Fields, Carrs, Lindow Common and the grassed area behind the fence and yet village green application is being sort so that local residents can have picnics and bird watch in our children's playing space!!"

Mr Stubbs disputed the grounds on which the objection is based so the Public Rights of Way Committee decided to proceed with a non-statutory public inquiry, which should cost the Council in the region of £15,000. As the Council is the objecting landowner it was felt appropriate to introduce an element of independence.

Mr Stubbs added "Having seen a letter being circulated by Gorsey Bank School, I would just like to reiterate that the portion of land in question is from the top of the bank, where the old fence used to be, to the new fence - nothing like the 50% mentioned.

"Given the number of school playing fields that have been sold off in recent years, the fact that the Council may have no current plans for development is small comfort. The granting of village green status would protect the land, should the Council ever have a change of heart, and would ensure the school (along with everyone else) would still have access to the area."

Mr Stephen Sauvain QC has been appointed to hold the public inquiry to determine the main issues - which appear to be whether the land has been used for lawful sports and pastimes over a period of at least 20 years; whether that usage has been 'as of right'; and whether any usage as of right has been by a significant number of the local residents.

A date has not yet been set for the inquiry but those who provided representations have until 26th June to inform the Council if they wish to speak at the inquiry. Mr Stephen Sauvain QC will then make his recommendation within 4 weeks of the closing of the inquiry and the decision will be made by Cheshire East Council, as the Registration Authority.

Simon Worthington
I suspect this application is being sort (sic) because as soon as the hundreds of new houses are complete and no new schools are built (no profit) then the existing schools will have to expand. At over 400 pupils Gorsey Bank is large by primary school standards and no doubt the council will find reason to make it even larger and there is a nice piece of free land to expand on to. Shame this has been made public - expect a Jones application for housing to be passed soon!!

DELETED ACCOUNT
I think you are right on this one Simon- particularly in the light of the Adlington Rd site where the Council claim that local primary schools( note the use of plural by them), are forecast to have sufficient capacity. What this means is that they will have sufficient capacity once we extend the current schools, including using this parcel of land.

Donald Patterson
What a lot of nonsence, I have lived near this field for 15 years and NEVER seen anyone playing Cricket, having a picnic or berry picking in all this time!!

If you want to fly your model aeroplane or play rounders then their is still plenty of space left or you could walk all of 20 feet to use the Carnival field.

The real reason behind these people not wanting the school to have this extra space is that there houses back onto the field!!

Gorsey Bank is a wonderful school and we should give it all the support we can.

Karen Mclaughlin
Well said Donald, I have NEVER seen these activities either and I live very close to the school. I would like to reemphasise that the school has reached its MAXIMUM capacity for both numbers of children and building size for the plot space. The green space is solely used for all 420 children to have fun, exercise and develop as fit, healthy, happy children!!

Florence Collier
Hmmm... hide and seek in an open field... really? Bird watching near a children's playground? I sincerely hope not! I am a berry picker myself but the pickings are rich enough along the path and in Carnival Fields. Plenty of green space in this area. This is a suspect application. If it's development they're worried about, why not cross that bridge IF and when they come to it; why wrest the land off the children in the meantime? How farcical would it be if they had to be bused to a different location for crucial physical exercise!

Christine McClory
Perhaps if you had live here for 60 years rather than a mere 15 you would understand how open land is taken from us, and how important it is to try and keep it. Gorsey Bank is a fantastic school, preserve it's environment and stop thinking that it's Alton Road residents baulking at possible development. It's all of us who should be wary. Open space is what makes Wilmslow beautiful. Be aware that there are those who want to build on any open space available. Fight for every last square metre.

Stuart Redgard
I agree with Christine McClorys' opinion. And I don't live on Alton Road but about 400m from the plot of land and my house does not back onto it. Open spaces like this are worth preserving. And I have lived there for just short of 20 years.

Dave Cash
Having it classified as a 'village green' should confer better protection against developers than current green field sites, though it looks like CEC are the final decision makers.
Gorsey Bank pupils will still be entitled to benefit from 'the Green', along with all Wilmslow residents.

Terry Roeves
Cheshire East Council own far too much Wilmslow land. This is state ownership of the wrong sort. Remember the school land next to Dean Oaks, sold by CEC to a builder for 15 houses? A village green or common land in perpetuity is far preferable to a CEC sell off. Wilmlsow doesn't see the money! It heads for Crewe and beyond. Non of the Councillors who are on the planning board come from around here. They love to load us up with houses, so they don't get built where they live.
The core strategy and the recent indecent enthusiasm to grant approval for 203 houses on Adlington Rd speak volumes.
I am truly appalled to their indifference towards Wilmslow. Wilmslow Town Council, Wilmslow Guild, Residents of Wilmslow had excellent recommendations, all were ignored.
On principal, we should all support Alton Road residents. Even if you don't pick blackberries there or fly a kite, once the land has gone, it has gone forever. CEC see us as a cash cow, easy votes and a soft touch. They need to be afraid of the consequences of their indifference.

Simon Worthington
Spot on Terry. It is a scandal (another) just how much land the old Macc council owned which then transferred to East Cheshire. This is land mainly bought with money from us - the local residents and now we get told what will or will not be built. The simple answer is for the council to guarantee that NO building will take place on this piece of land and access to all will continue. We can all trust the council can't we!!!!

Ruth Dudley
Am I completely missing the point here? If the school retain the land it will be used as a playing field. It won't be built on. Why would they build a classroom so far from the main school buildings? That would never make sense even if the school eventually did expand (which Mrs Woolley has assured us is not going to happen).
If it is made village green status then the school can't use it for play time as the children can't be allowed out to play on an unfenced area. So therefore this land will not be used apart from autumnal berry pickers and the school children won't have the wonderful space they have during break time in which to play.
If the main concern is that the minute the ground is handed over to the school is that it will be built on then why can't a legal agreement be drawn up to agree this won't happen and we can all save the £15k legal costs.

Pete Taylor
A shame that Broadway Meadow was not designated as a village green, prior to the Council allowing building there.