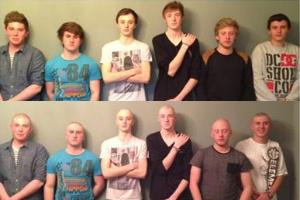 In a display of courage and comradeship, nine friends from Wilmslow High School have shaved their heads to support their close friend and raise money for Teenage Cancer Trust.

After hearing the news that their good friend Tom Lee, 17, had been diagnosed with Hodgkin's Lymphoma, the group of mates shaved their heads to show solidarity to Tom, and also to raise as much money as possible for charity.

Afterwards the group of sixth formers set up a JustGiving page and invited people to donate whatever they could to their chosen cause, The Teenage Cancer Trust. Donations came flooding in and at the last count over £3182 has been raised.

Ollie Knight said, "At first we were not considering raising money but to only shave our heads to support Tom. However I'm so pleased we decided to because of the incredible sum we have raised. We all feel extremely proud!"

Alex Lloyd added "The support from everyone so far has surpassed what we expected by a long, long way. I would like to thank every single person who has donated so far, the support they have given us, but more importantly the support for Tom and his family is astounding. We would appreciate it if people could continue to spread the word. The Teenage Cancer Trust does amazing work every day and deserve every penny they get."

The Teenage Cancer Trust is a charity devoted to improving the lives of teenagers and young adults with cancer,

Our thoughts are with Tom Lee who is currently at The Christie having chemotherapy.

Kate Ravenscroft
Proud to say that my son is one of Tom's friends. What they have done is amazing and they have really rallied round Tom to support him in his battle against cancer. Donate if you can and take a moment to realise that not all teenagers are how they are made out to be in the media. Good luck Tom xx

Lee Brocklehurst
Congratulations lads, you're a credit to your parents, Wilmslow and clearly great mates of Tom.

Stuart Redgard
Brilliant, absolutely brilliant. Well done. What friendship is all about.

Carole Burton
Brought tears of laughter and sadness to my eyes to watch that video, what great friends! All the best of luck to Tom....with friends like that you will do great.

Helen Fowler
Love this, what great guys! And Tom obviously is too to have such good mates. Wishing Tom all the best. This video made me laugh and cry at the same time.