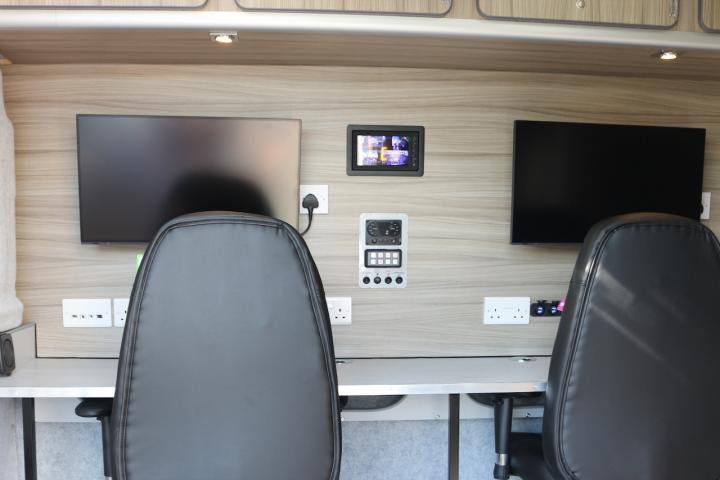 In response to the findings of the government's in-depth Rape Response Review, the Ministry of Justice and the Home Office announced a package of measures including the Transforming Forensics (TF) programme.

The TF programme has begun a new £5m project designed to help police forces in England and Wales improve how they respond to rape or serious sexual offences (RASSO) and other serious crimes.

The outside of the "digivan" is indistinguishable from any other, but inside it is a mobile office containing all of the equipment and software that the investigating team needs to perform phone extractions and conduct digital examinations at the scene. As it is unmarked, the van can visit a victim's home or crime scene discreetly.

The kiosks have been installed in the majority of the force's Local Policing Units and Custody Suites, Roads Policing, the Serious and Organised Crime Unit, the Management of Sexual or Violent Offenders, and Police Headquarters in Winsford.

The new digital services and portable tools provided by TF enable police forces to take technology to victims, examine mobile phones and other digital devices at crime scenes, and give investigators faster access to the right digital evidence.

They allow trained officers to securely extract data from a wide range of devices, SIM cards or USBs.

Officers can perform selective or full physical data extraction as the functionality allows victims and witnesses to share only the data that's relevant to the case, while leaving all other information private. This helps to build trust in the community, encourages community collaboration and saves time.

One major aim is that no victim of RASSO is left without a phone for more than 24 hours, with an ambition that victims have their own phones returned within this period. Replacement phones will be provided in a minority of cases. Furthermore, victims will not be asked for information unless it is necessary and proportionate in pursuit of a reasonable line of inquiry.

The ultimate aims are to deliver a faster, safer and more sensitive service for those affected by RASSO and other crimes, better evidence entering courts and increased confidence in the criminal justice system.

Detective Chief Inspector Gavin Day of the Digital Media Investigation Unit said: "We have worked hard to ensure that Cheshire received the maximum benefit from this government funding and the new equipment will enable us, as a force, to vastly enhance our digital capability to protect the most vulnerable in our society.

"Whenever an officer is asked to investigate a RASSO incident one of their first considerations should be contacting the digital forensics unit. This ensures that a Digital Media Investigator, or an officer from within the digital forensics unit, attends the address of the victim, or an agreed location, so that any evidence held on the victim's personal devices is captured with minimal impact to the victim. This enhances our service level, strengthens our opportunity to gather valuable evidence and, most importantly, increases the victim's confidence in us."